My Father's Tears and Other Stories by John Updike 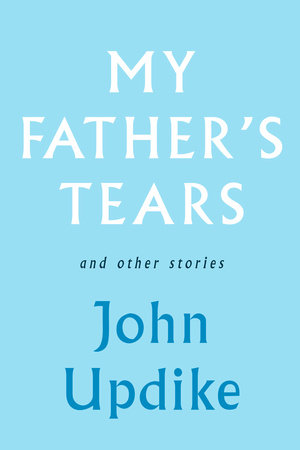 “This final volume of new Updike stories is, in many respects, a perfect bookend to Pigeon Feathers, the precocious collection of stories that nearly five decades ago announced their 30-year-old writer’s discovery of his own inimitable voice.”—Michiko Kakutani, The New York Times

John Updike’s first collection of new short fiction since the year 2000,
My Father’s Tears finds the author in a valedictory mood as he mingles narratives of his native Pennsylvania with stories of New England suburbia and of foreign travel.

“Personal Archaeology” considers life as a sequence of half-buried layers, and “The Full Glass” distills a lifetime’s happiness into one brimming moment of an old man’s bedtime routine. High-school class reunions, in “The Walk with Elizanne” and “The Road Home,” restore their hero to youth’s commonwealth where, as the narrator of the title story confides, “the self I value is stored, however infrequently I check on its condition.” Exotic locales encountered in the journeys of adulthood include Morocco, Florida, Spain, Italy, and India. The territory of childhood, with its fundamental, formative mysteries, is explored in “The Guardians,” “The Laughter of the Gods,” and “Kinderszenen.” Love’s fumblings among the bourgeoisie yield the tart comedy of “Free,” “Delicate Wives,” “The Apparition,” and “Outage.”

In sum, American experience from the Depression to the aftermath of 9/11 finds reflection in these glittering pieces of observation, remembrance, and imagination.

About John Updike: John Updike was born in 1932, in Shillington, Pennsylvania. He graduated from Harvard College in 1954 and spent a year in Oxford, England, at the Ruskin School of Drawing and Fine Art. From 1955 to 1957 he was a member of the staff of The New Yorker. He wrote more than fifty books, including collections of short stories, poems, essays, and criticism. His novels have won the Pulitzer Prize, the National Book Award, the American Book Award, the National Book Critics Circle Award, the Rosenthal Award, and the Howells Medal. He died in January 2009.