Grand New Party: What is the future of the GOP? 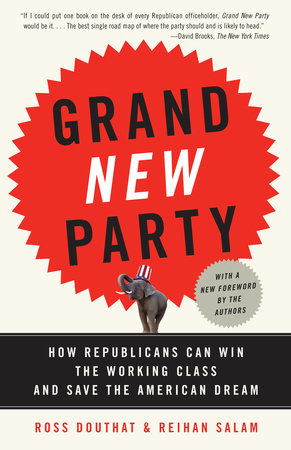 Tune in to CNN’s “Lou Dobbs Tonight” to hear the authors of Grand New Party, Ross Douthat and Rihan Salam, weigh in on the future of the GOP during a debate-style segment.

Grand New Party, which is just out in paperback, lays bare the failures of the conservative revolution and presents a detailed blueprint for building the next Republican majority. Blending history, analysis, and fresh, often controversial recommendations, Ross Douthat and Reihan Salam argue that it is time to move beyond the Reagan legacy and the current Republican power structure. With specific proposals covering such hot-button topics as immigration, health care, and taxes, Grand New Party shakes up the Right, challenges the Left, and confronts the changing political landscape.

Be sure to check your local listings for show times.