Most of the Knopf cooks went home for Father’s Day this weekend, leaving Florence and myself—California girls both—to hold down the fort. But Dads: out of sight, you were not out of mind! Here, we present two possibilities for a Father’s Day brunch, both taken from Kenny Shopsin’s culinary polemic Eat Me.

For an elegant meal, we tackled Kenny’s lemon ricotta pancakes; for a heartier option, we took on his infamous mac n cheese pancakes. Both would be accompanied by Edna Lewis’s lemonade, taken from The Gift of Southern Cooking. (Her recipe for strawberry shortcake, from the same book, was recently mastered by the Knopf team.)

First we went to Fairway for the necessary goods: 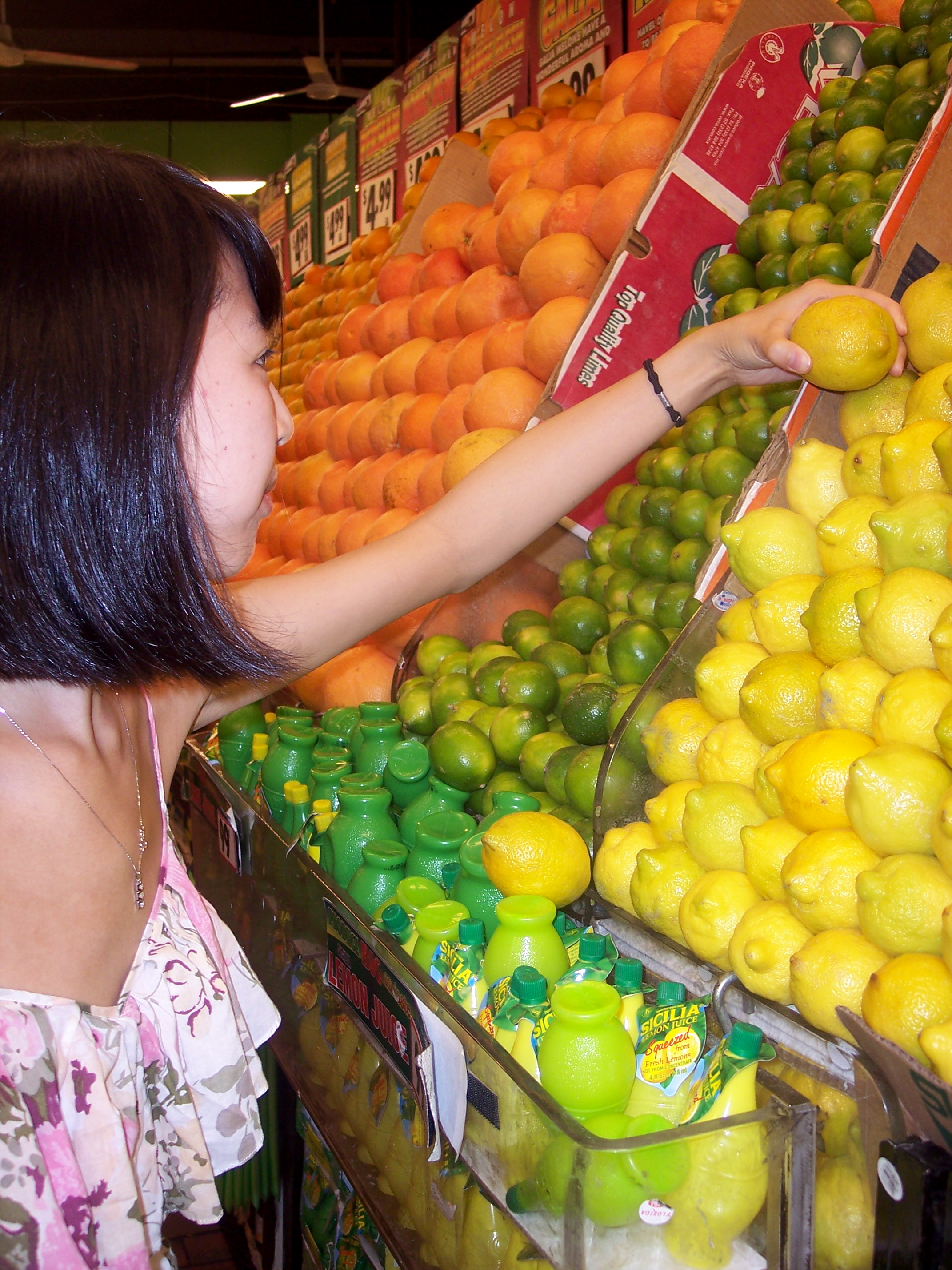 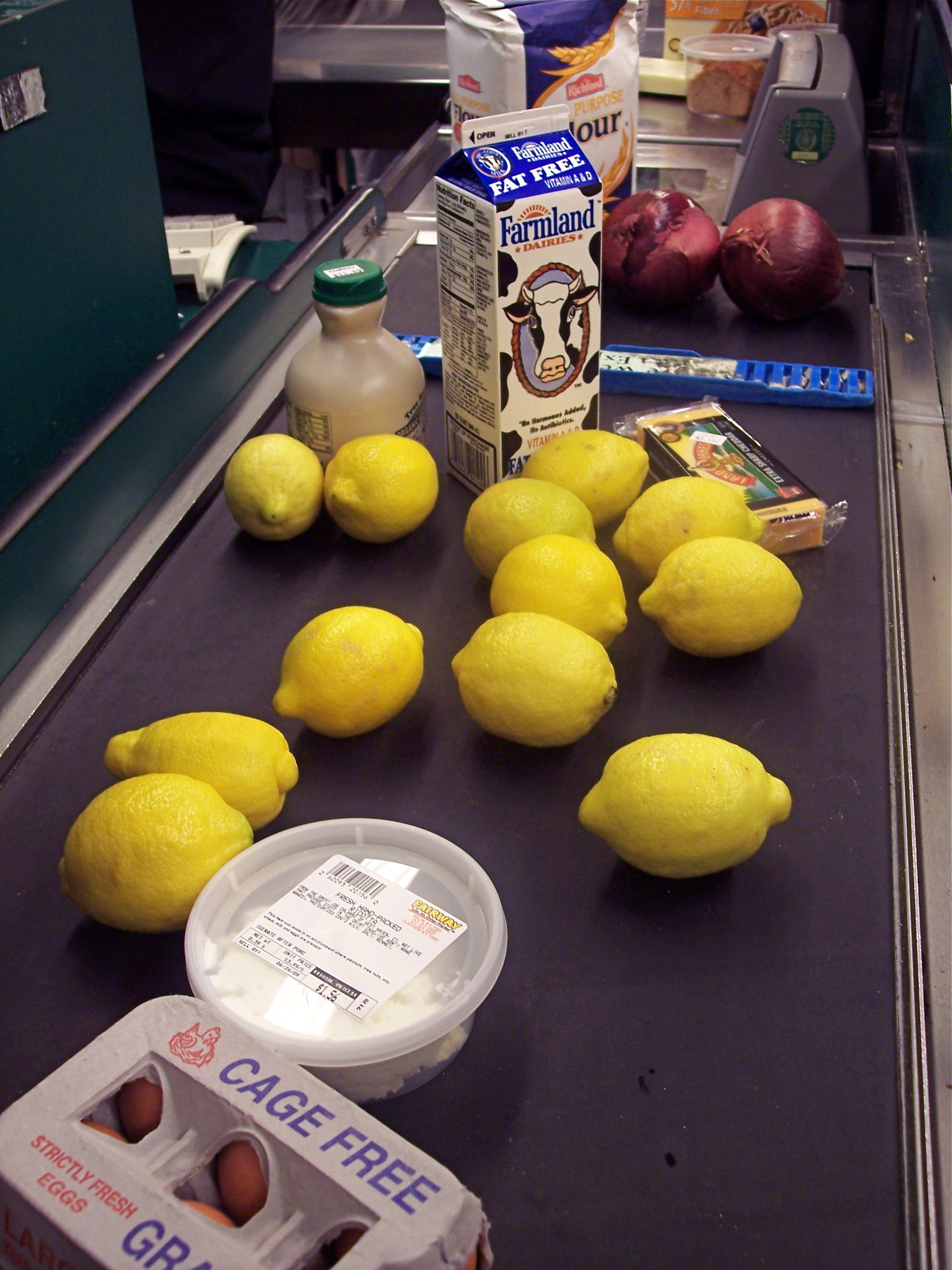 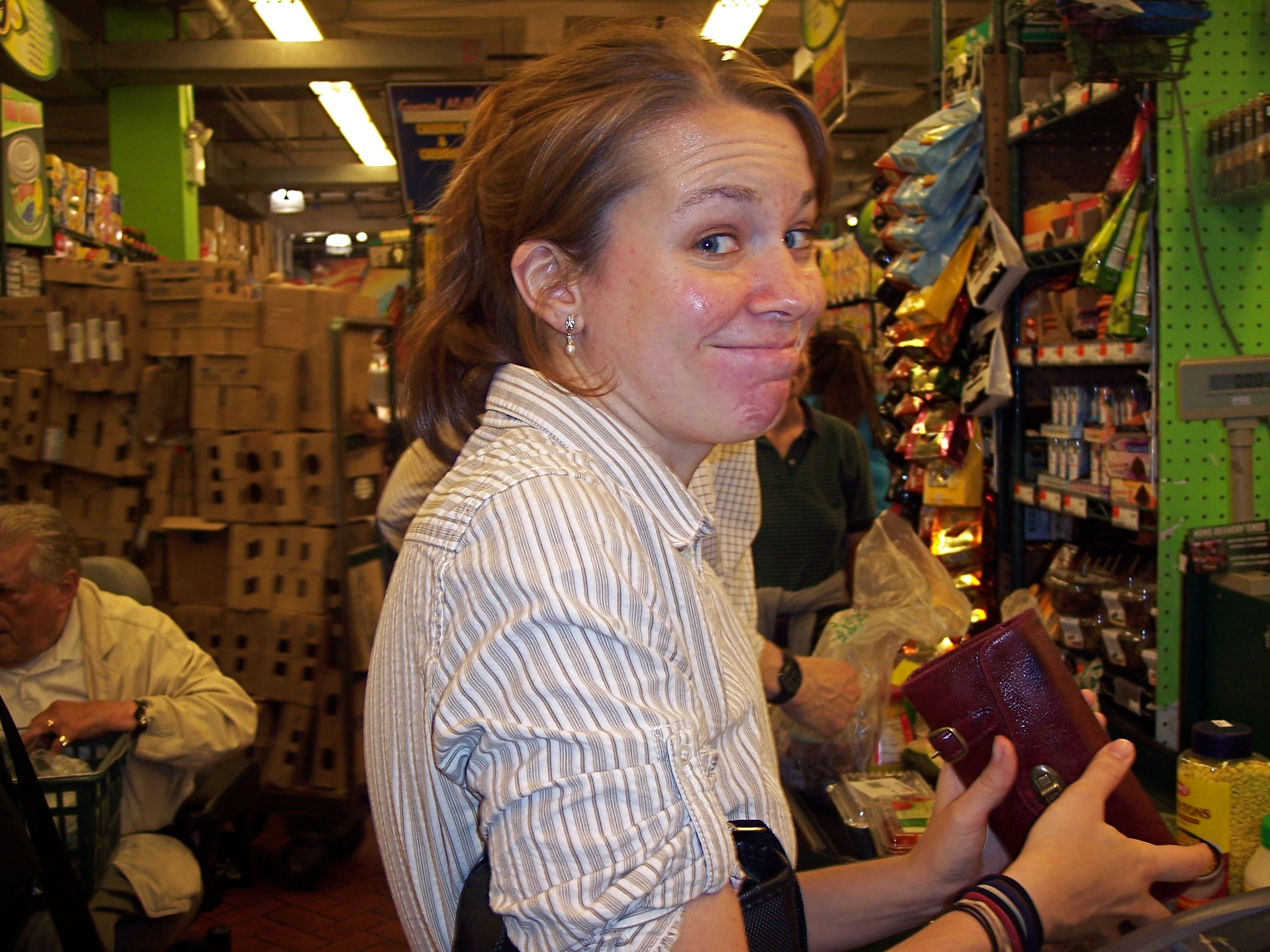 And then we got to it. Florence was responsible for making Edna’s lemonade, recipe below.

Put the granulated sugar, freshly squeezed lemon juice, salt, and water into a large crockery or punch bowl. Stir well until the sugar is dissolved, then add the lemon slices. Refrigerate until ready to use. Serve garnished with the optional mint.

She began by cutting and squeezing 11 of the 12 lemons that we had purchased: 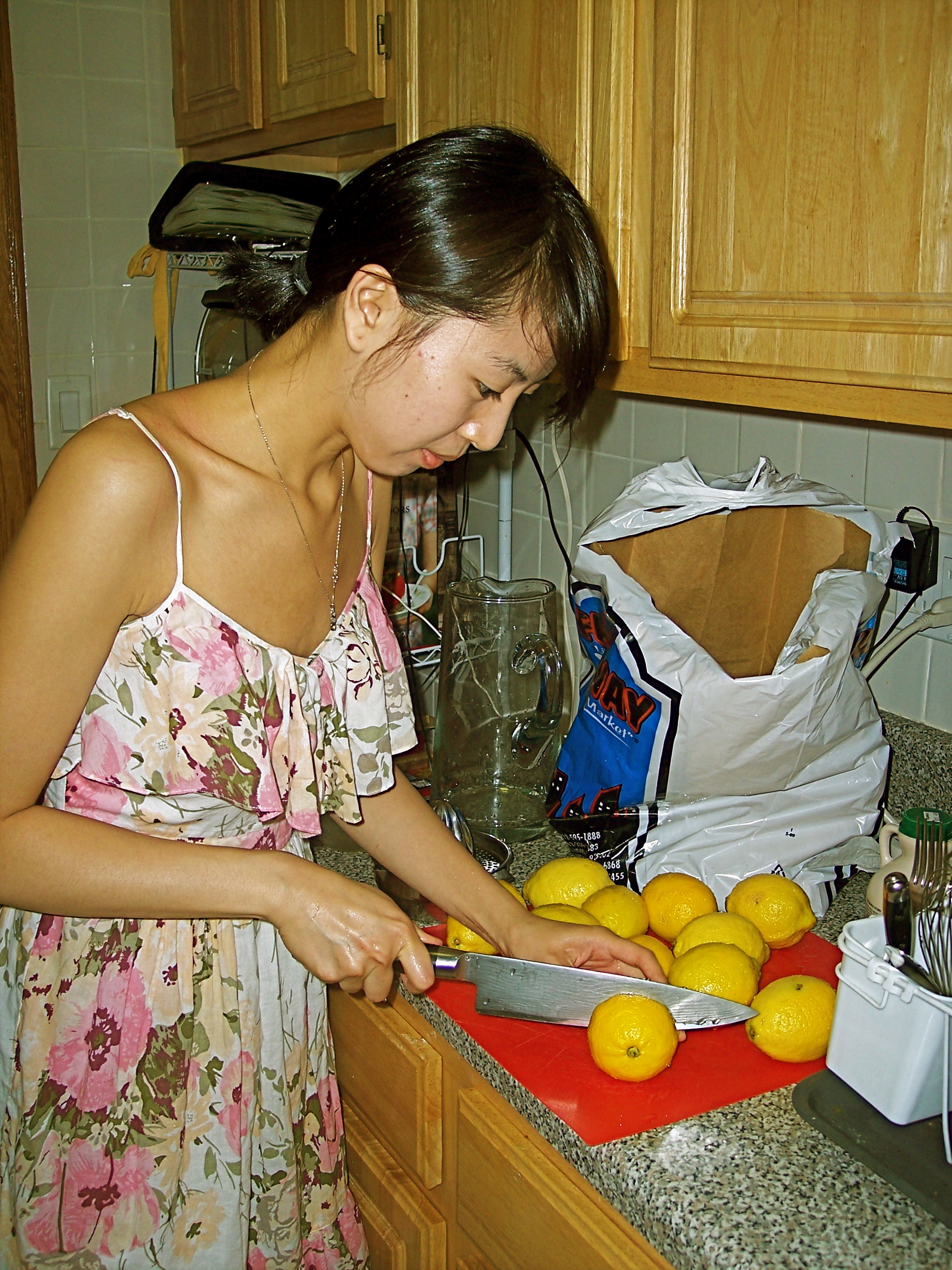 It’s worth noting here that we made a mistake with this lemonade. Edna’s recipe calls for the sugar, lemon juice, and water to be mixed cold, but I suggested heating the sugar and water together first to make a simple syrup. We combined the sugar and all the water at once—but in fact the syrup should be made with just enough water to dissolve the sugar, and the rest should be added cold along with the lemon juice. We served our lemonade slightly warm, even after setting it in the refrigerator to chill. But anyway: here’s Florence adding the syrup to the juice! 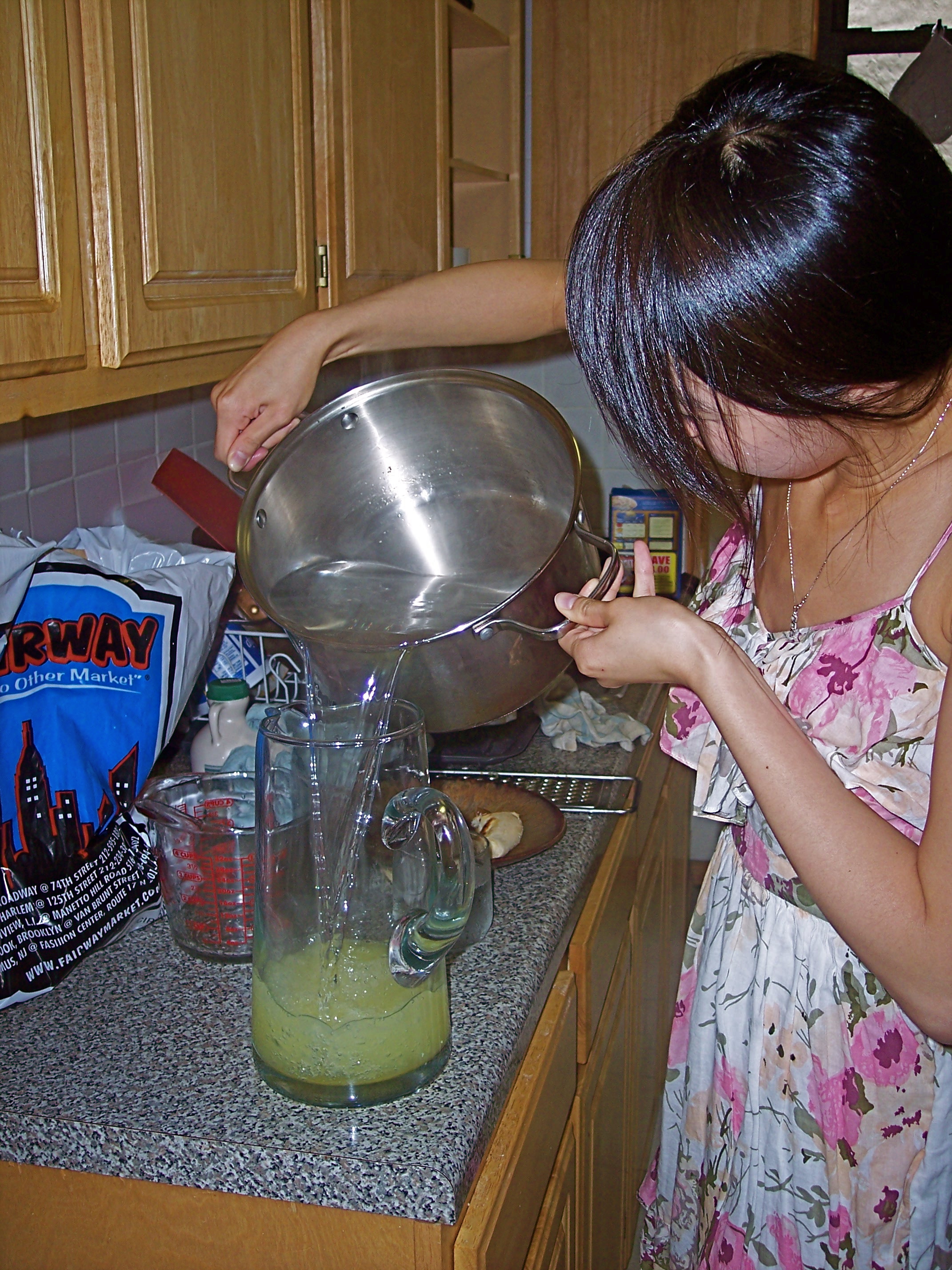 In the meantime, I made the pancake batter for both recipes: 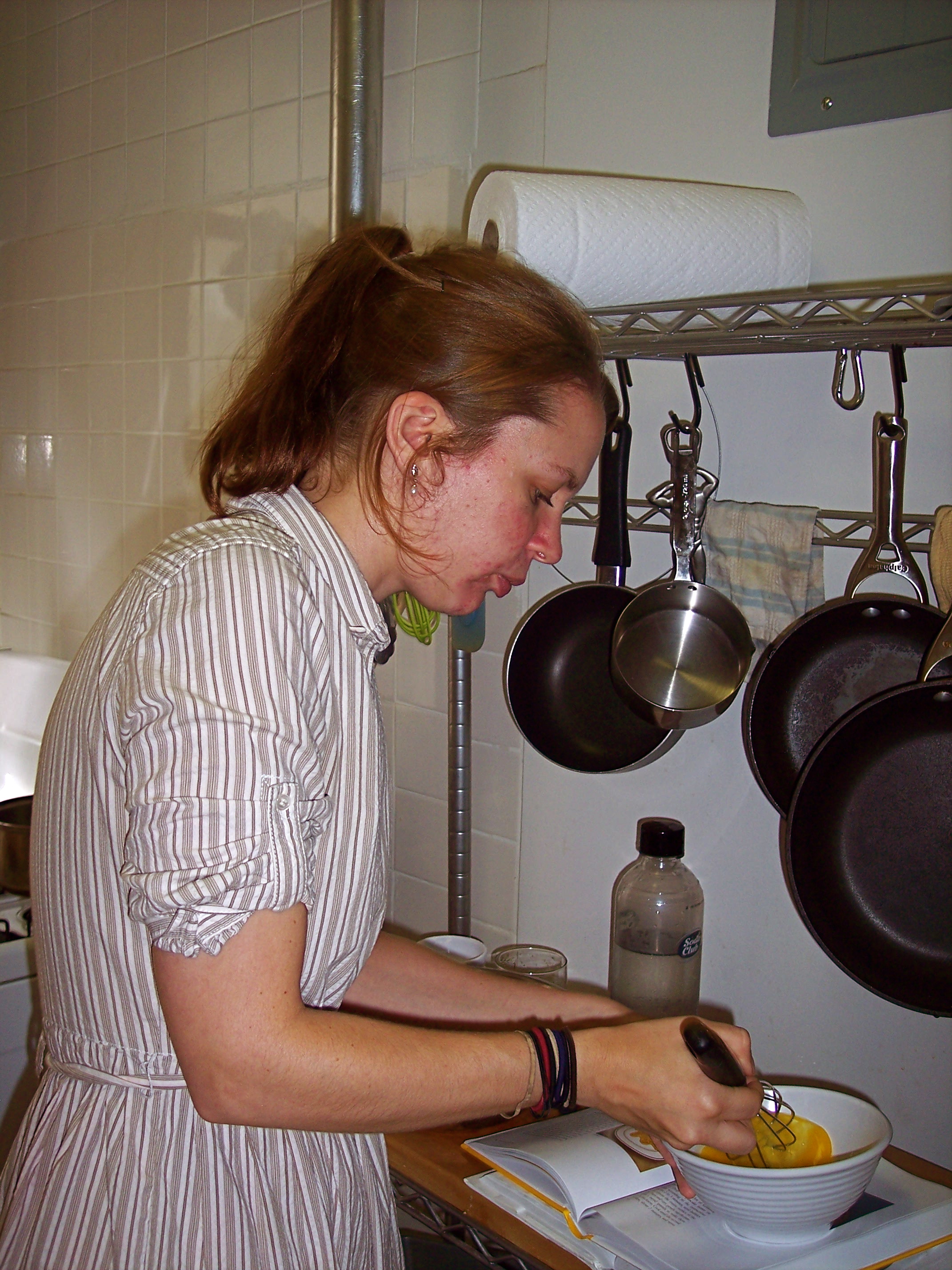 Kenny calls for Aunt Jemima’s frozen batter, but it seemed simpler to make our own. I also zested lemon and boiled macaroni, tossed it with olive oil, and put it aside. Florence grated the cheddar for the mac n cheese pancakes.

We moved on to the lemon ricotta batter.

Stir the pancake batter and citrus zest together in a bowl. Ever so gently fold in the ricotta cheese, taking care not to destroy its texture. Prepare the griddle. Drop the pancake batter on the griddle and cook for 2 to 3 minutes, until bubbles appear on almost the entire surface of the pancakes. Turn and very gently tap the pancakes with a metal spatula to make them uniform in thickness. Cook until the second side is golden, about two minute, and serve A-side [the side that cooks first] up.

(Recipe excerpted from Eat Me by Kenny Shopsin and Carolynn Carreño. Copyright 2008 by Kenny Shopsin. Excerpted by permission of Alfred A. Knopf, a division of Random House, Inc. All rights reserved. No part of this excerpt may be reproduced or reprinted without permission in writing from the publisher.)

Florence mixed in the zest and gently folded in the ricotta: 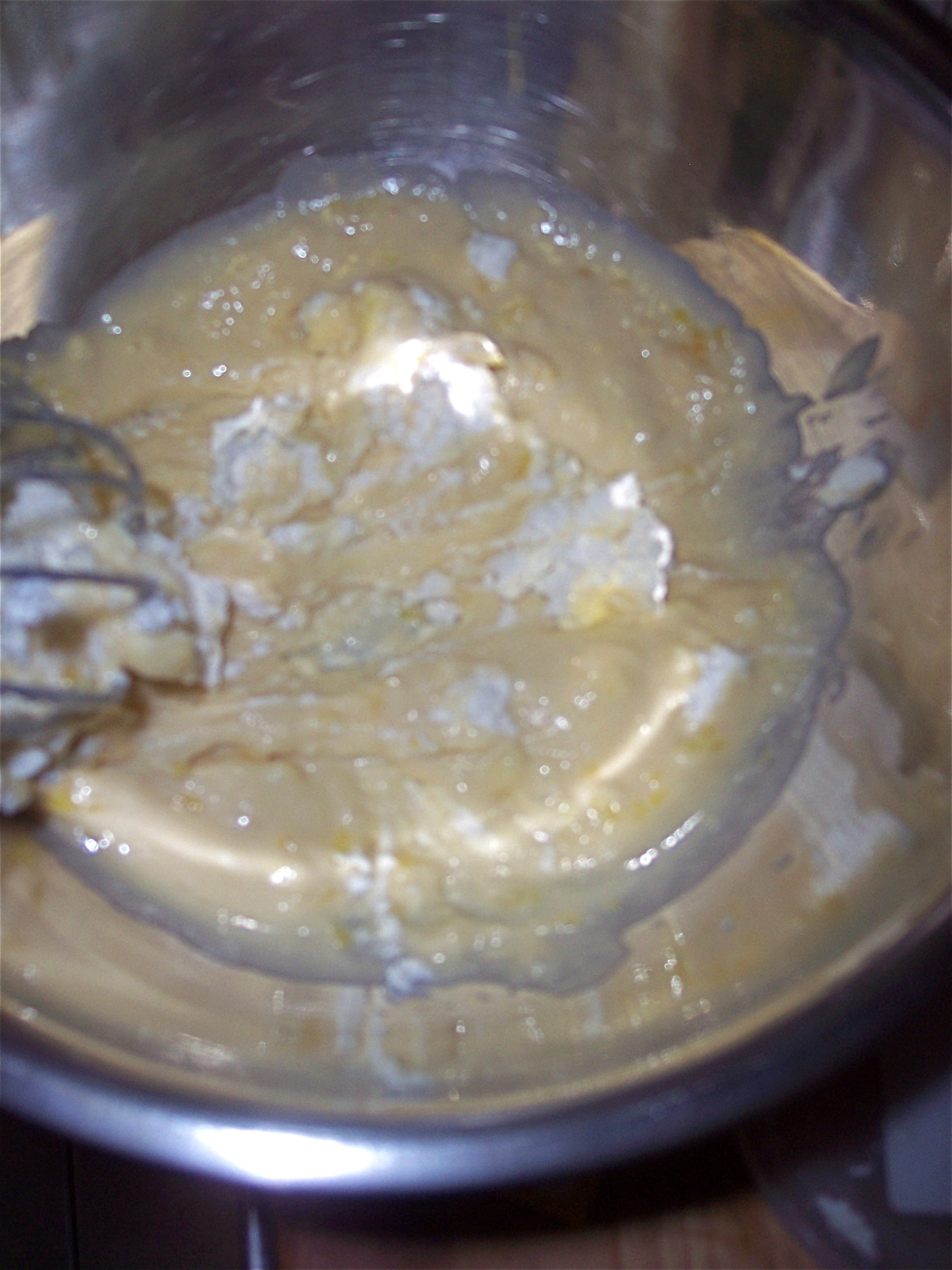 Then it was time to prepare the griddles. Kenny recommends heating them, adding a thin layer of peanut oil, and then sparingly applying cold butter. Turn up the heat immediately after to compensate for the cold ingredients. As the butter foamed on each of our two griddles—Florence handling the lemon ricotta, I the mac n cheese—we added our batter.

Prepare the griddle and drop in the pancake batter. When small bubbles appear on 40 to 50 percent of the surface of the pancakes, about 2 minutes, drop about 1 tablespoon of the warm elbow macaroni on each pancake. Sprinkle with a thin layer of cheese (about 1 tablespoon) and use a thin, lightweight spatula to rapidly flip the pancakes. After all the pancakes have been turned, reduce the heat to medium and use the spatula to press the pancakes down on the griddle. When the undersides are golden, about 2 minutes after turning them, use the spatula in a decisive high-pressure sawing motion to lift and turn the pancakes onto a plate, B-side [the side that cooks second] up. Serve with butter and warm maple syrup.

(Recipe excerpted from Eat Me by Kenny Shopsin and Carolynn Carreño. Copyright 2008 by Kenny Shopsin. Excerpted by permission of Alfred A. Knopf, a division of Random House, Inc. All rights reserved. No part of this excerpt may be reproduced or reprinted without permission in writing from the publisher.) 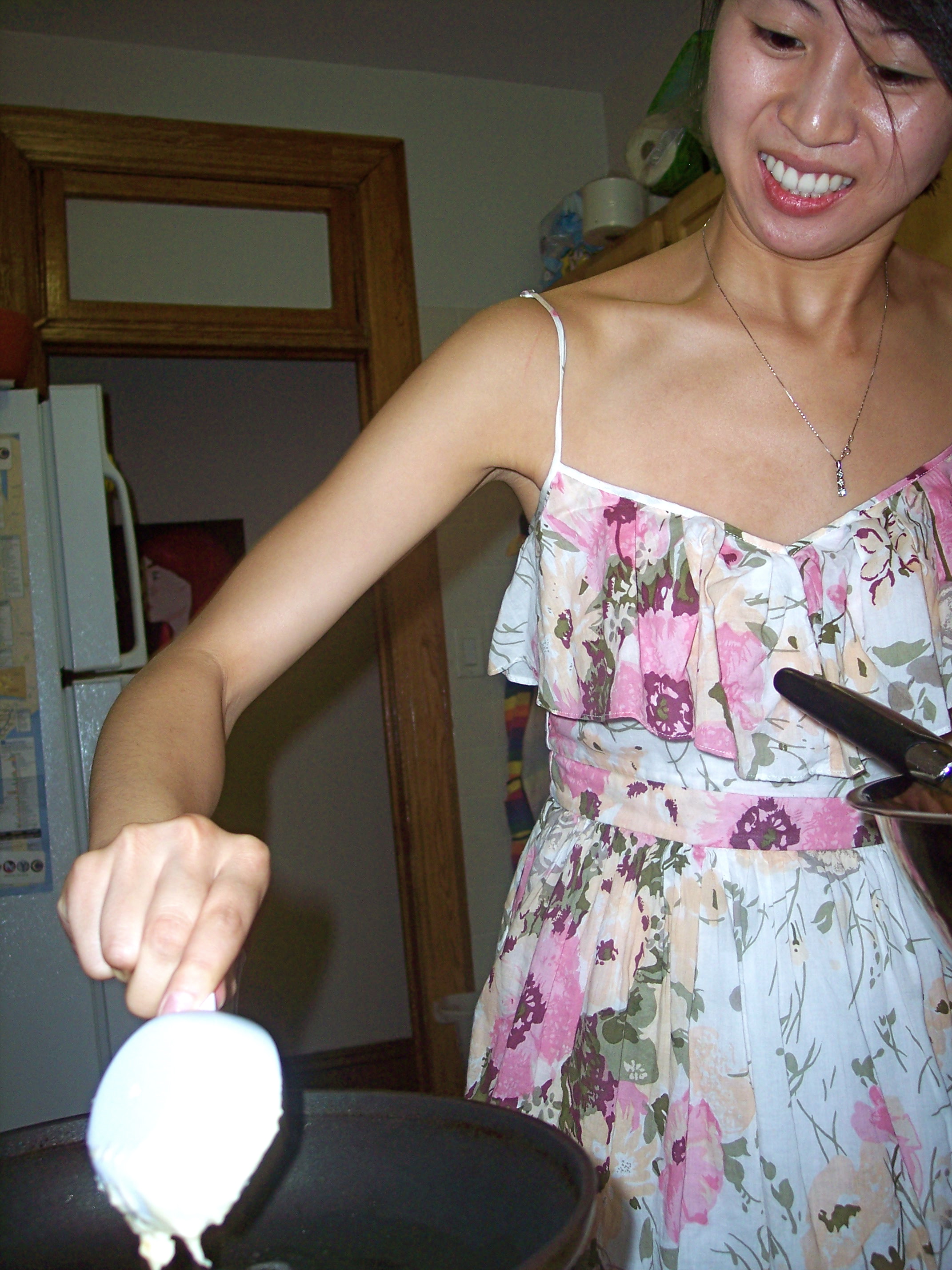 And the process of the mac n cheese pancakes: 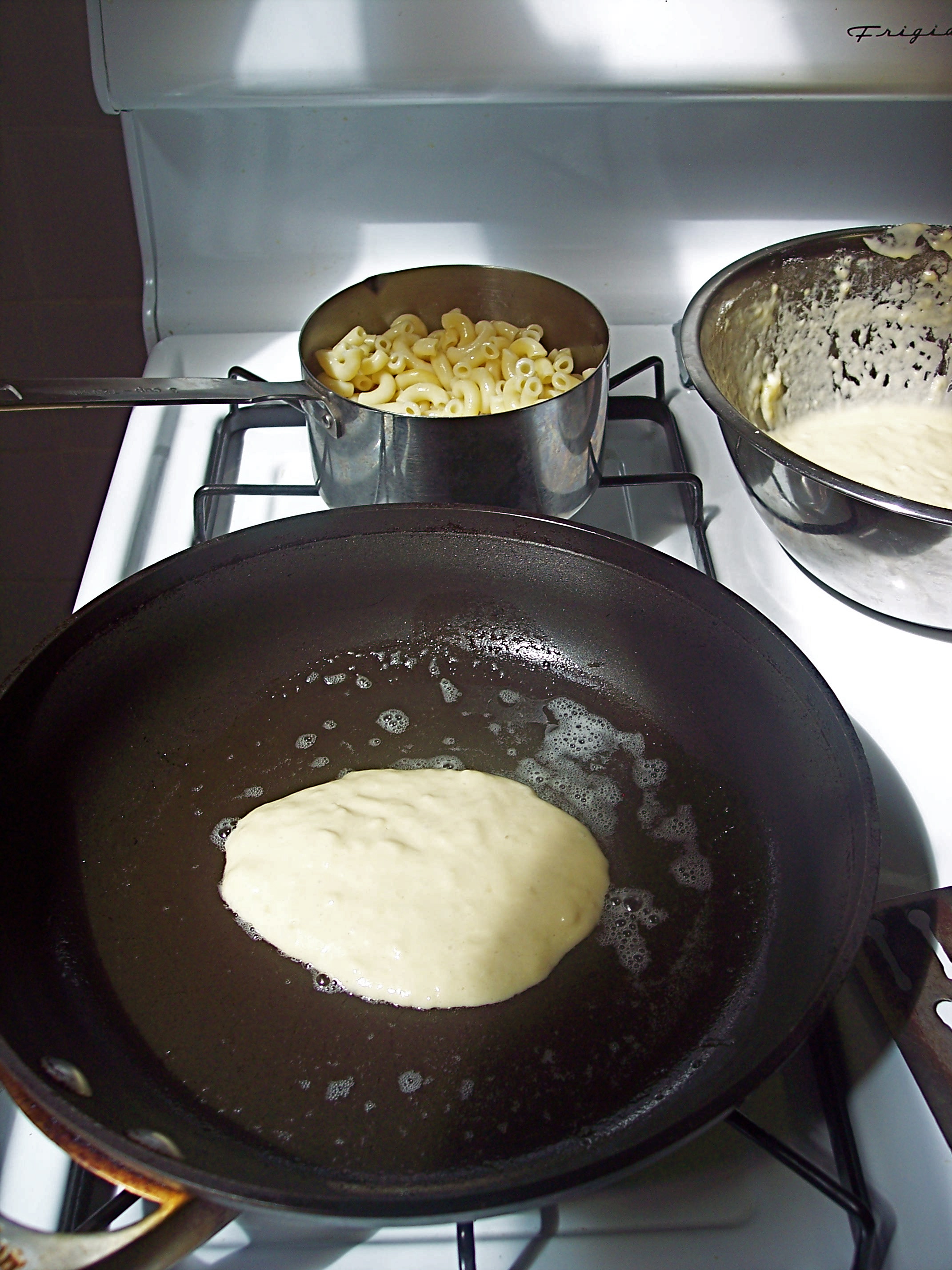 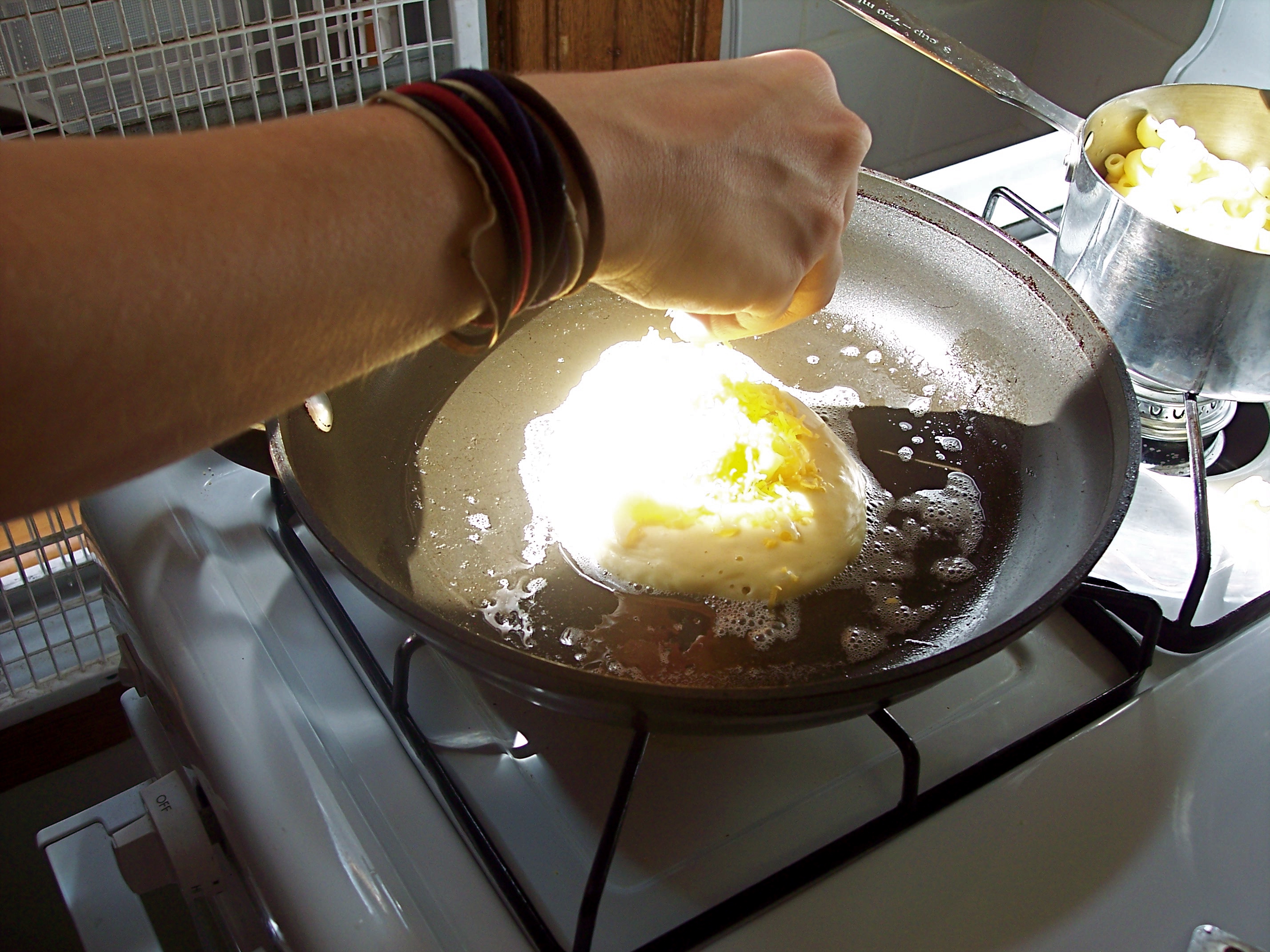 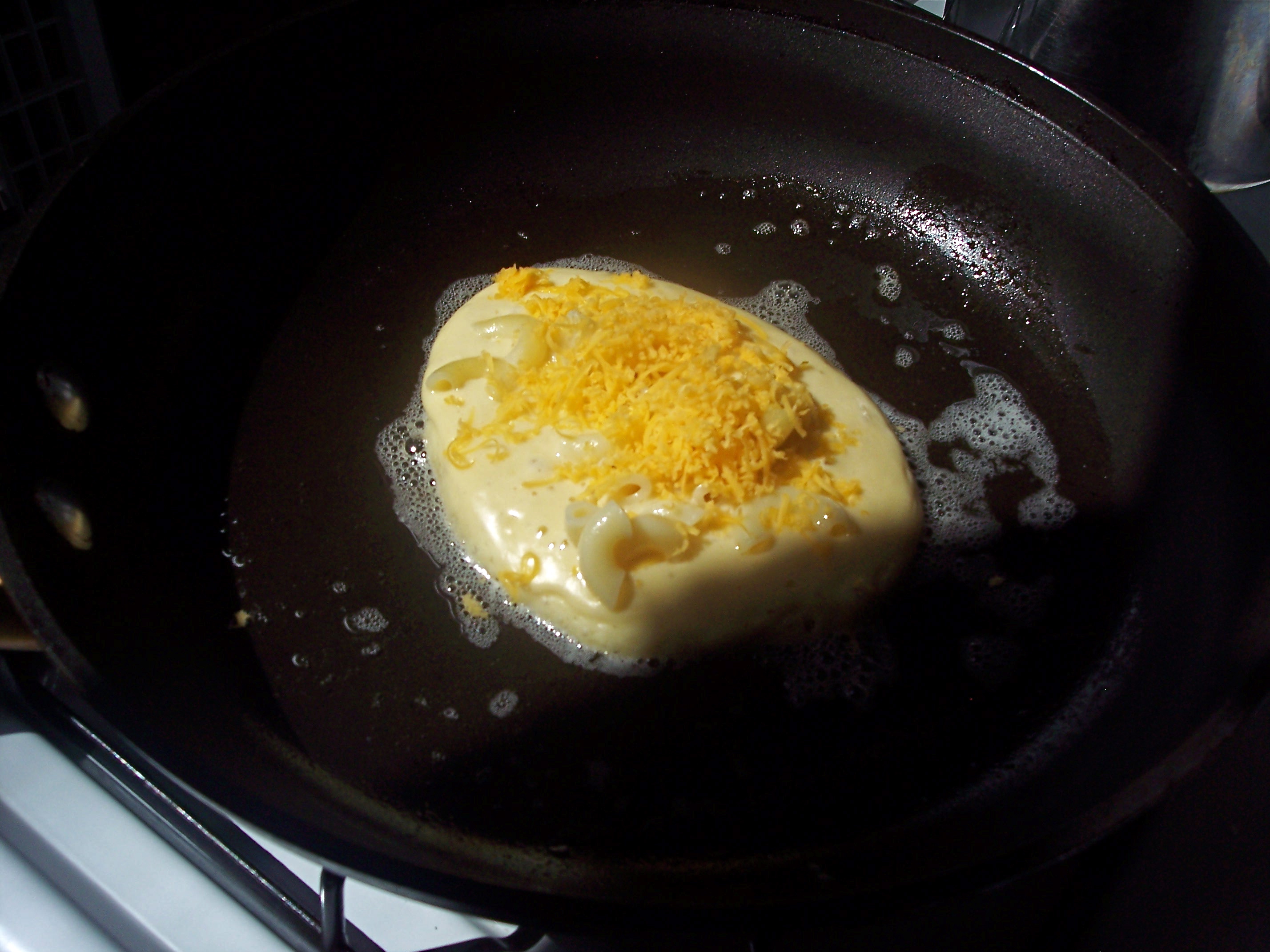 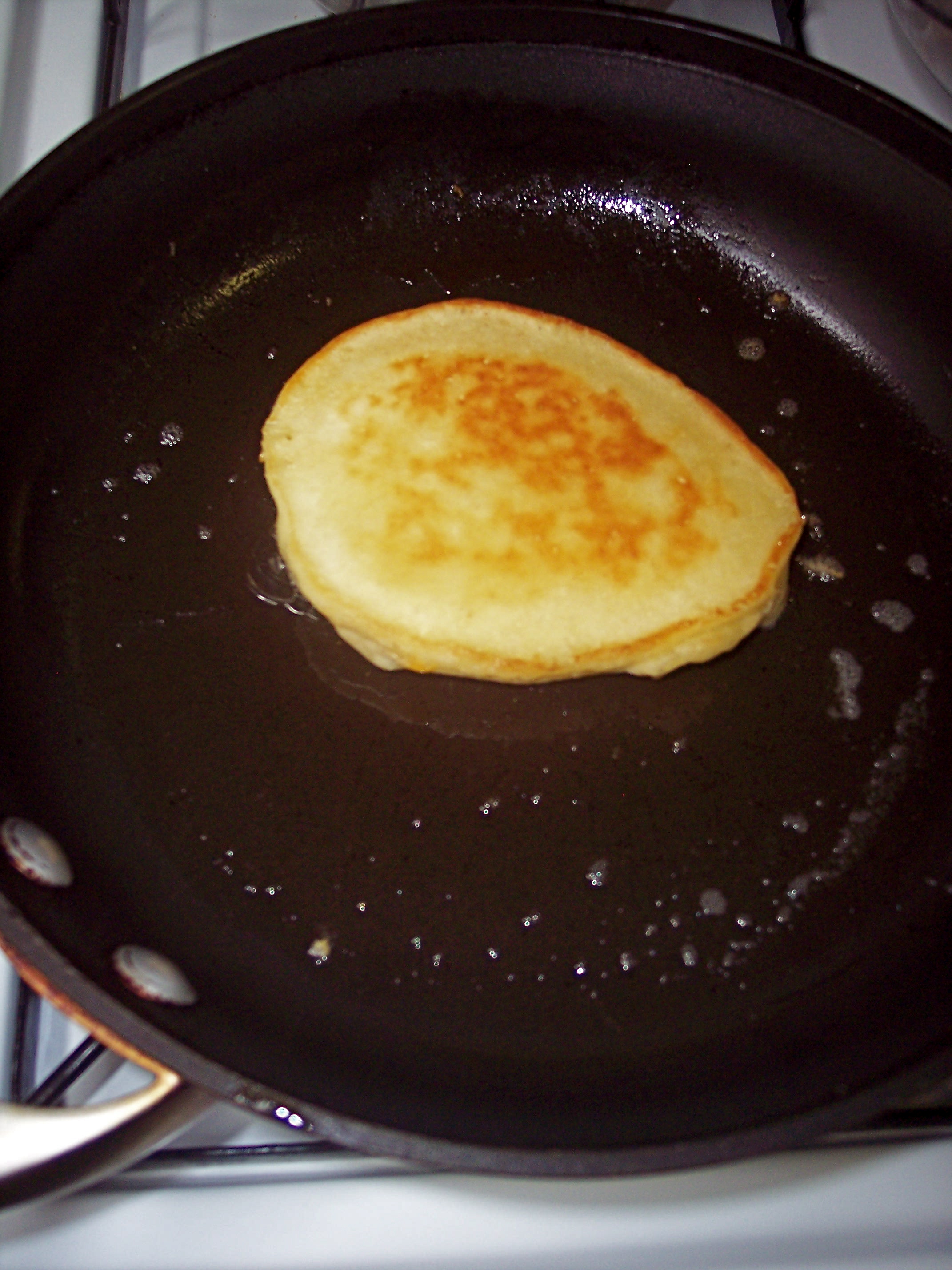 Us, at our respective burners: 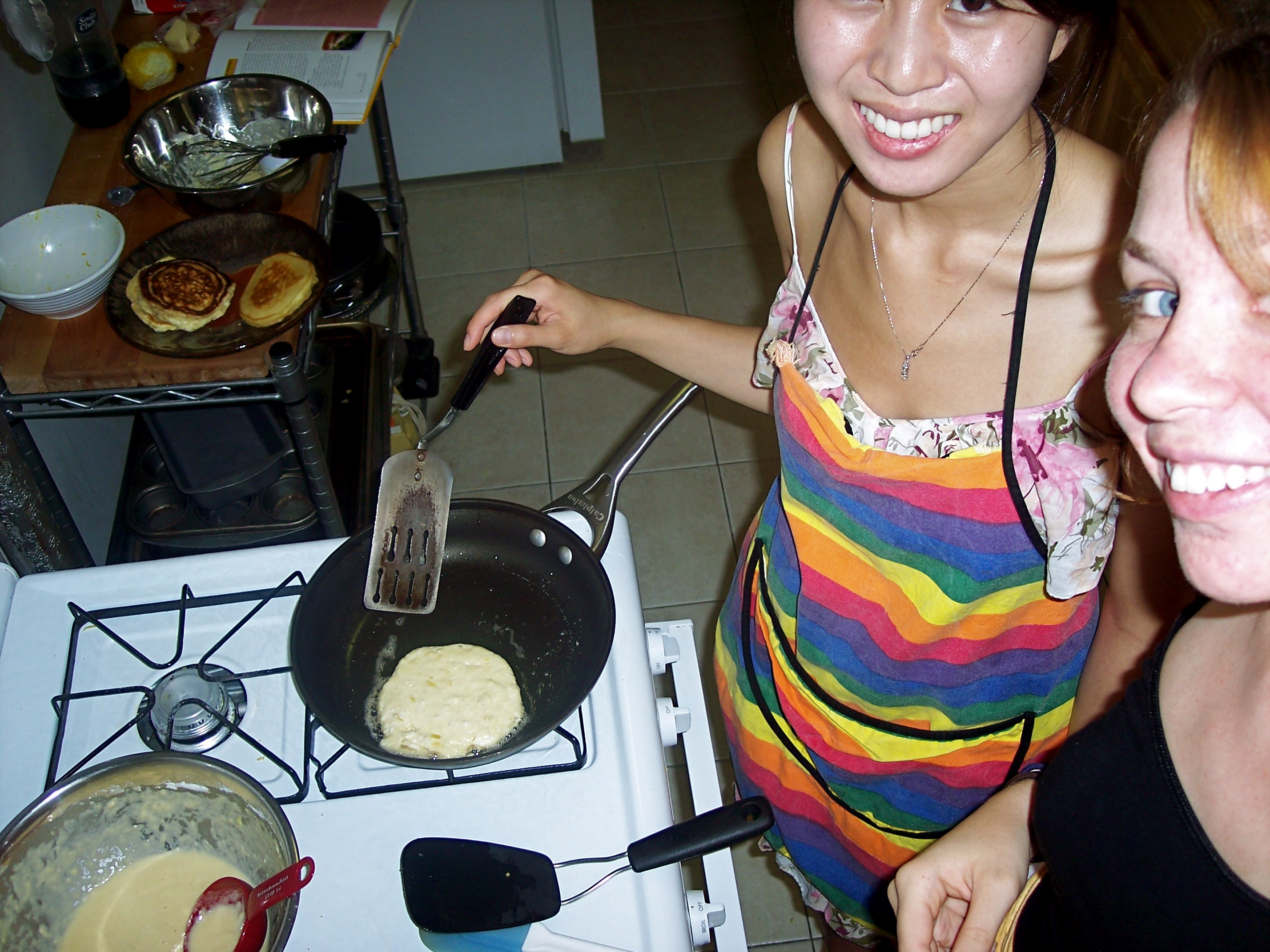 Finally, it was time to eat! Florence’s boyfriend joined us for the feast, in the absence of any fathers. We added sliced lemon and strawberries, and a few sprigs of pineapple mint, to Edna’s lemonade; we served the pancakes with butter and maple syrup; and we dug in. The finished product: 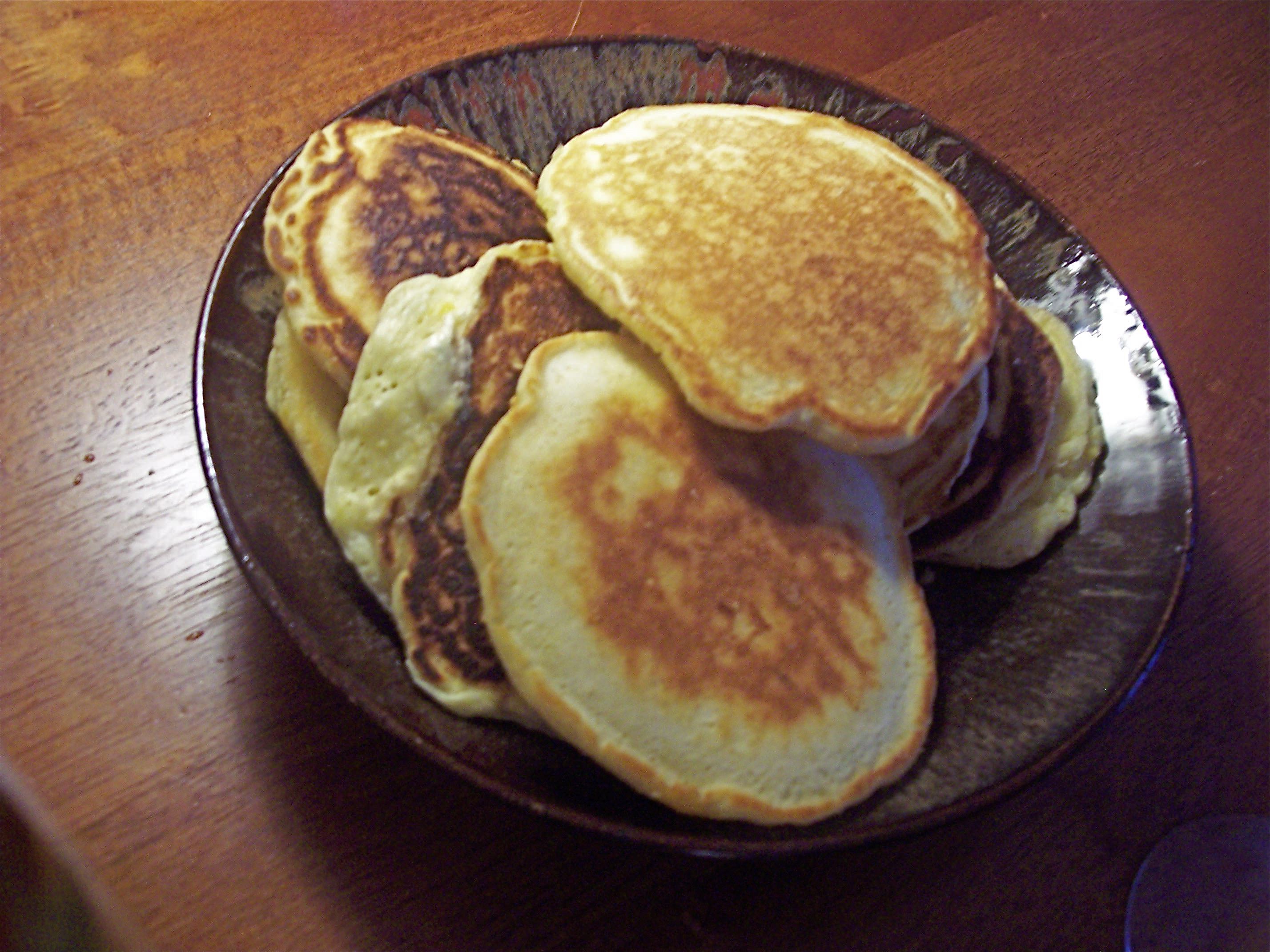 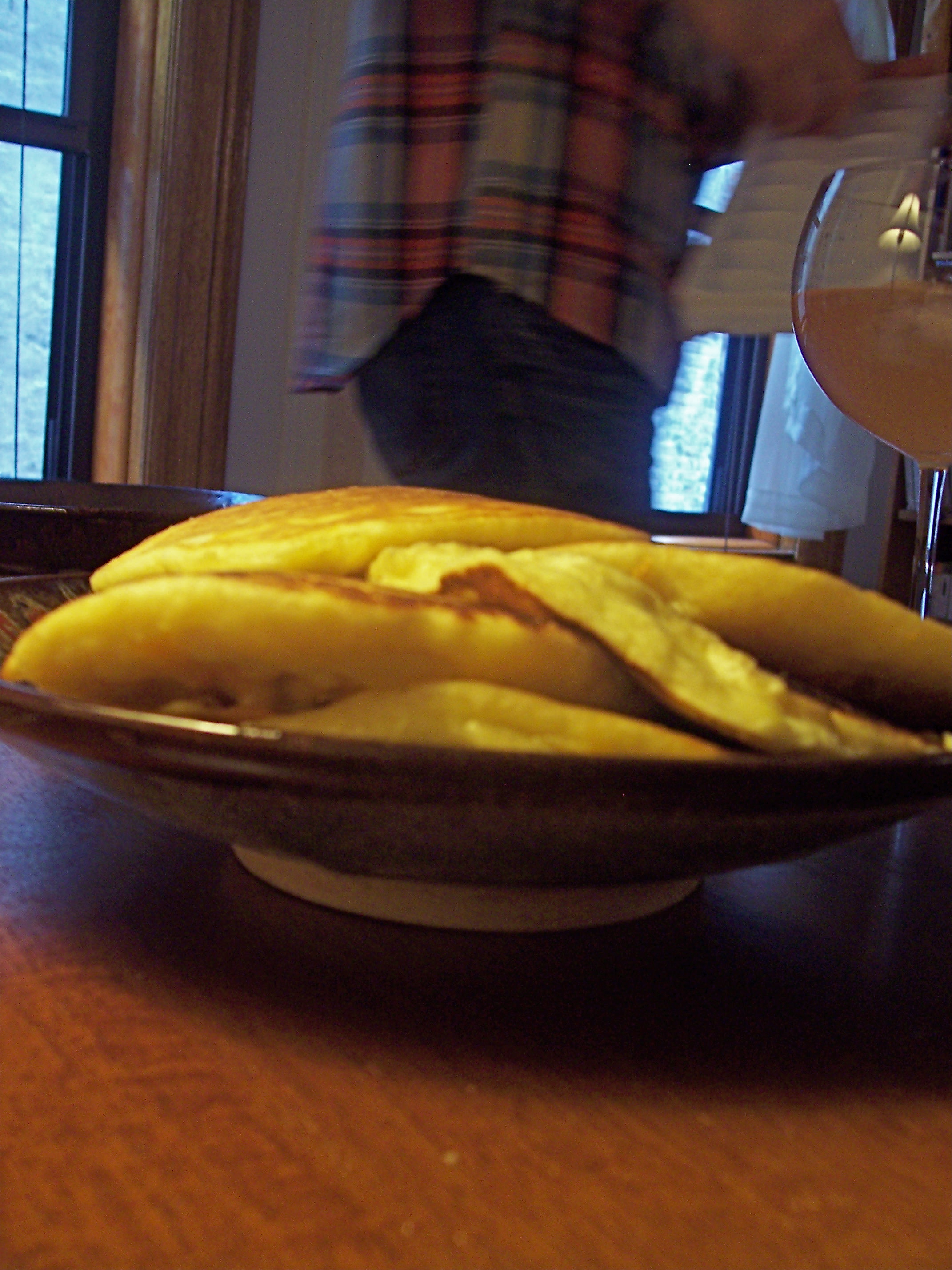 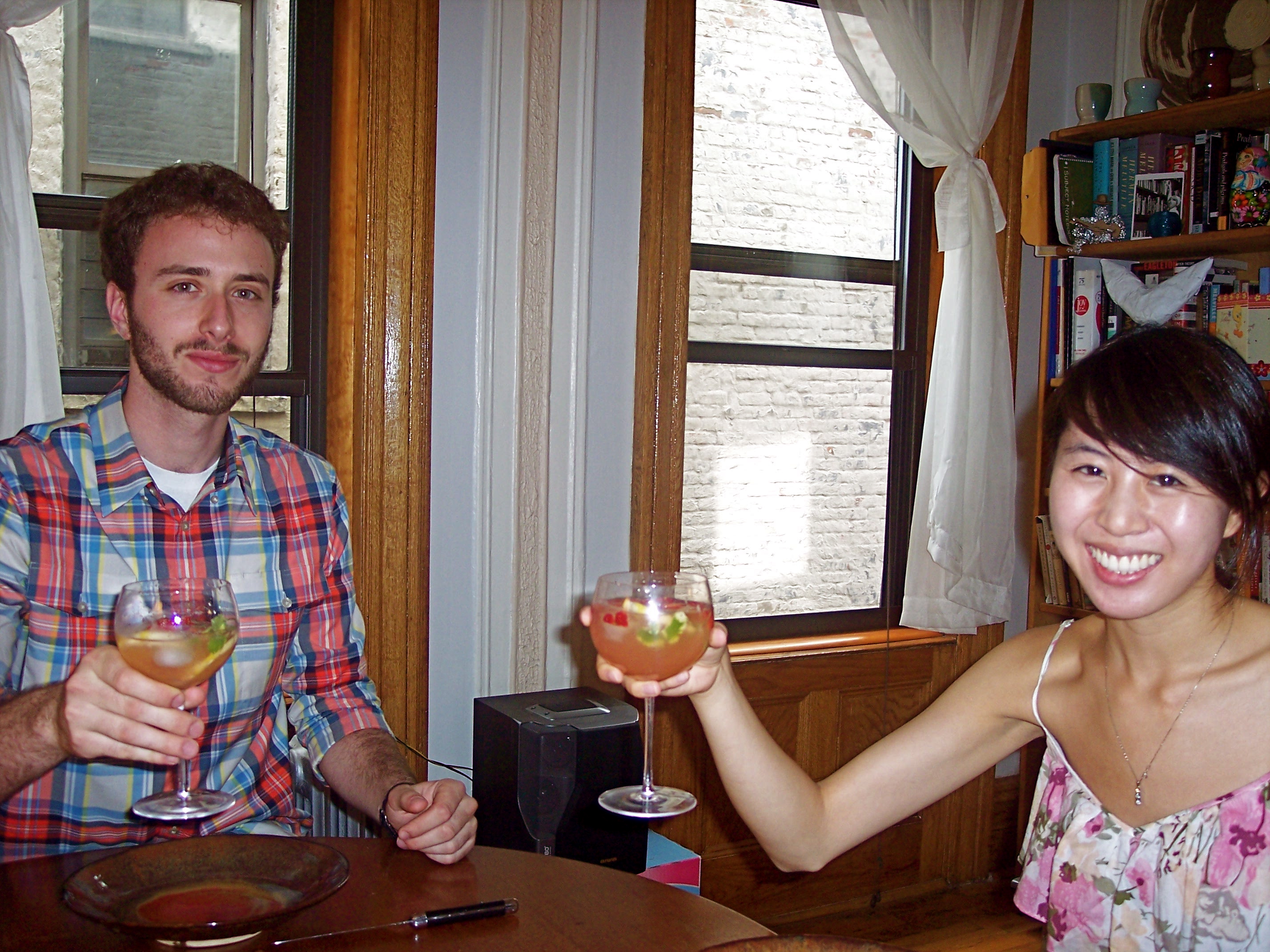 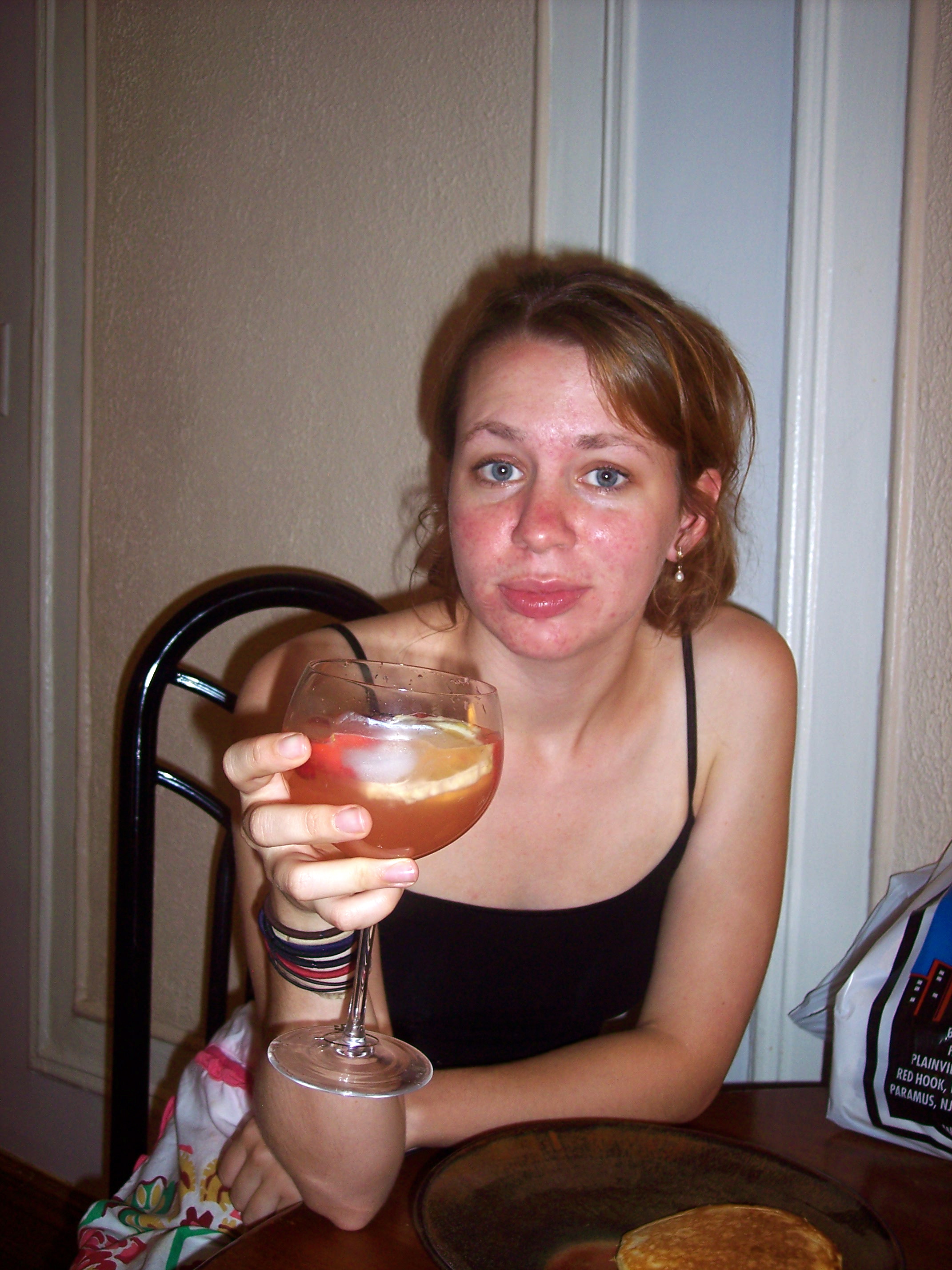 A word on the mac n cheese pancakes: I was skeptical when we began, thinking that the product would taste a lot like pancake batter added to macaroni and cheese. But in fact, the taste and texture of the macaroni was barely noticeable, adding only its considerable volume to the pancake. So what we ate was an artificially fluffy cake flavored with slightly burned cheese. Delicious. The remains, half an hour later:

And one more thought: the lemon should be zested as fine as possible, because as I did it (on a cheese grater), the zest was unpleasantly large and crunchy. These pancakes don’t really need maple syrup, either, although adding it to the mac n cheese pancakes was definitely rewarding.

Joey, Florence, and Alfred (A. Knopf)