In Conversation with Stephen L. Carter 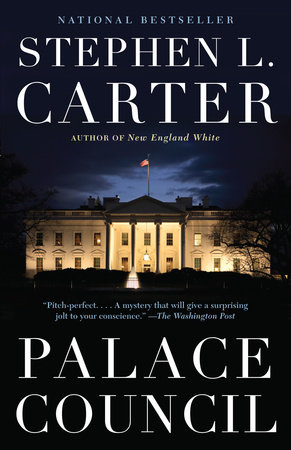 Vintage sat down with Stephen L. Carter to discuss suspense, inspiration, and plot. Carter’s most recent book, Palace Council, is out in paperback June 2009.

Palace Council is, like your other novels, a page-turner about families and secrets, but it is also a departure from your previous novels in its historical scope. At its heart it’s a novel about the 1960s and the tumultuous events and radical politics of that decade. What made you want to explore this particular period in history?

I once heard a great novelist warn that one should never disclose the source of one’s ideas for stories — not because there is some great secret to be kept, but because any answer will be a lie. There is a sense in which the novelist never knows the answer.

Still, if I cannot give the answer, I can at least give a clue. I have long held the view that modern America was shaped in the 1960s, which I date as the era from the Supreme Court’s desegregation decisions in the 1950s, to the end of the Nixon Administration, and of the Vietnam War in the mid-1970s. I have touched on the importance of this era in some of my non-fiction work, particularly my 1996 book Integrity. I suppose the lasting influence of those years, on my life as well as on the nation, led me finally to decide to explore the era in fiction.

There is also, now that I think about it, a simpler reason that must have played a role. I wanted to continue the stories of some of my characters from The Emperor of Ocean Park and New England White, but what I wanted to know was what they were like when they were younger. The years this novel covers are also the formative years for many of those characters. In that sense, the time period suggests itself quite naturally.

What are your own recollections of this particular time in your own life?

Oh, dear. I remember so much! I can close my eyes and see the Harlem of my childhood, the shades, the sounds, the excitement; or the Washington, D.C., of my late youth; or the Ithaca, New York, of my adolescence. The Kennedys, King, Nixon — all fresh in my mind. It is difficult sometimes for those of my generation to remember that when today’s college freshmen were born, JFK had been dead for nearly thirty years!

Without giving anything away, of course, can you tell us a little about The Palace Council and the people who make it up?

The world is today as it is in my novel: people of power get into lots of trouble when they are determined to do what they consider the right thing, and not interested in anyone else’s opinion.