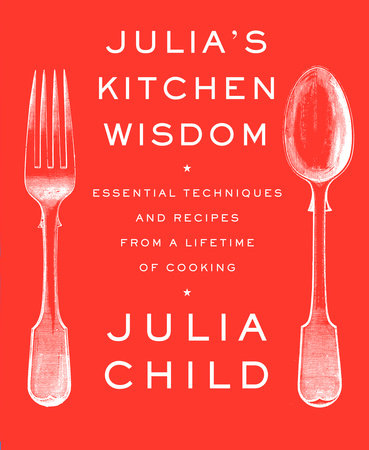 How many minutes should you cook green beans? Is it better to steam them or to boil them?
What are the right proportions for a vinaigrette?
How do you skim off fat?
What is the perfect way to roast a chicken?

Julia Child gave us extensive answers to all these questions–and so many more–in the masterly books she published over the course of her career. But which one do you turn to for which solutions? Over the years Julia also developed some new approaches to old problems, using time-saving equipment and more readily available products. So where do you locate the latest findings?

All the answers are close to hand in this indispensable little volume: the delicious, comforting, essential compendium of Julia’s kitchen wisdom–a book you can’t do without.

Julia Child was born in Pasadena, California. She was graduated from Smith College and worked for the OSS during World War II in Ceylon and China, where she met Paul Child. After they married they lived in Paris, where she studied at the Cordon Bleu and taught cooking with Simone Beck and Louisette Bertholle, with whom she wrote the first volume of Mastering the Art of French Cooking (1961). In 1963, Boston’s WGBH launched The French Chef television series, which made her a national celebrity, earning her the Peabody Award in 1965 and an Emmy in 1966. Several public television shows and numerous cookbooks followed. She died in 2004.