Guess what I’m doing next weekend? Hiking up to Harriman State Park to go blueberry picking. Then I’m going to make some blueberry jam. This is shaping up to be the best weekend ever!

But not everyone can take off for an afternoon of berry picking—if you end up picking up your blueberries at the store, avoid any packages that appear stained or damp, as the fruit inside may be spoiled. If you don’t eat all the blueberries at once, you can refrigerate them in their original container for up to 5 days.

Even if I hadn’t already decided on jam, I wouldn’t be at a loss for blueberry condiment ideas. Here are three inventive recipes from our cooking blogroll: 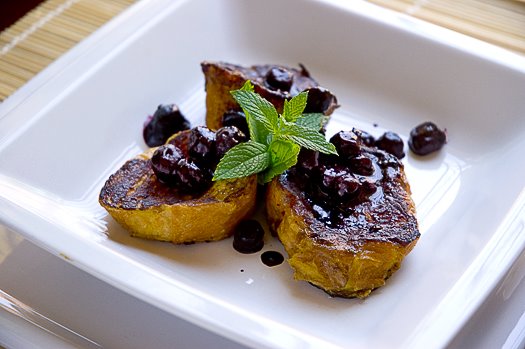 Over the Hill and On a Roll offers up a blueberry compote recipe that calls for frozen blueberries. If you decide to work with fresh blueberries, you can probably take the berry-sugar-triple sec mixture off the heat in less time.

Infusing maple syrup with blueberries—101 Cookbooks, you are a genius!

I’m glad Baking Delights is around to think outside the box. I had considered using blueberries as a topping for pastries, but not as a topping for meat. I love the idea of building upon the blueberry’s flavor by adding habanero peppers and adobo sauce.

Of course, blueberries don’t always have to play a supporting role as a sauce. The following recipes put blueberries front and center: The Fourth of July may have come and gone, but berry season is still in full swing. Rather than shelf this recipe until next year, whip up Recipe Girl‘s cheesecake bars in honor of Bastille Day. France’s flag is red, white, and blue, too! 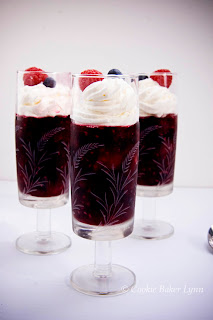 Cookie baker lynn‘s got the right idea for summer cooking: “Above all else, do not turn on the oven to bake!” With that in mind, she gives us this recipe for a blueberry parfait. Now that I know how to whip cream, I’d be inclined to make my own topping—provided I don’t work up a sweat!

For those of you who seek Julia Child recipes in order to enter our Be Like Julie: Cook From Julia contest, I spy a blueberry clafouti and an exotic-looking rum babas with fruit recipe in my copy of Mastering the Art of French Cooking. Prizes and glory could be yours—hop to it!