Now On Sale: The Girl Who Played with Fire by Stieg Larsson 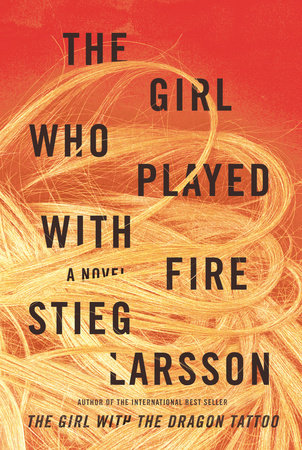 “Lisbeth Salander was one of the most original and memorable heroines to surface in a recent thriller: picture Angelina Jolie’s Lara Croft endowed with Mr. Spock’s intense braininess and Scarlett O’Hara’s spunky instinct for survival . . . [The novel] boasts an intricate, puzzlelike story line that attests to Larsson’s improved plotting abilities, a story line that simultaneously moves backward into Salander’s traumatic past, even as it accelerates toward its startling and violent conclusion . . . The reason [the novel] works is the same reason that Dragon Tattoo worked: Larsson’s two central characters, Salander and Blomkvist, transcend their genre and insinuate themselves in the reader’s mind through their oddball individuality, their professional competence and, surprisingly, their emotional vulnerability.”—Michiko Kakutani, The New York Times

Mikael Blomkvist, crusading journalist and publisher of the magazine Millennium, has decided to run a story that will expose an extensive sex trafficking operation between Eastern Europe and Sweden, implicating well-known and highly placed members of Swedish society, business, and government.

But he has no idea just how explosive the story will be until, on the eve of publication, the two investigating reporters are murdered. And even more shocking for Blomkvist: the fingerprints found on the murder weapon belong to Lisbeth Salander—the troubled, wise-beyond-her-years genius hacker who came to his aid in The Girl with the Dragon Tattoo, and who now becomes the focus and fierce heart of The Girl Who Played with Fire.

As Blomkvist, alone in his belief in Salander’s innocence, plunges into an investigation of the slayings, Salander herself is drawn into a murderous hunt in which she is the prey, and which compels her to revisit her dark past in an effort to settle with it once and for all.

Stieg Larsson, who lived in Sweden, was the editor in chief of the magazine Expo and a leading expert on antidemocratic right-wing extremist and Nazi organizations. He died in 2004, shortly after delivering the manuscripts for The Girl with the Dragon Tattoo, The Girl Who Played with Fire, and the third novel in the series.