With Julie and Julia hitting screens this Friday, and the resulting hubbub of media attention, it’s almost easy to forget that it’s the cooking—the joy, the messiness, the comforting rhythm of it—that is at the heart of it all. So last weekend, we returned to Julia’s wonderful, inimitable recipes in Mastering the Art of French Cooking.

The Knopf crew was peppered (pun not intended!) with vegetarians, so we decided to make what might be the only recipe in Mastering the Art of French Cooking that calls for both no butter or meat: ratatouille. With zucchini and eggplant in season, it’s a great way to cook up all those summer vegetables. 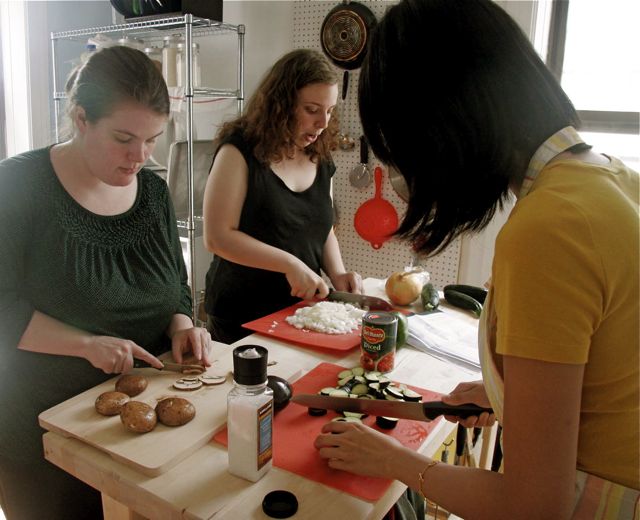 Here we are hard at work, dicing and slicing.

First, we sliced about 1 lb of eggplant and 1 lb of zucchini, placing the slices in a bowl and tossing with some sea salt. (If the vegetables look funny, it’s because they are from my CSA—pesticide-free produce, as it turns out, is often funnily shaped!) We let this stand for 15 minutes or so, while we prepped the other vegetables. (Julia says to let the vegetables stand for 30 minutes, but we were too hungry to wait. She also says to drain the vegetables, but we found that there was no residual water.) 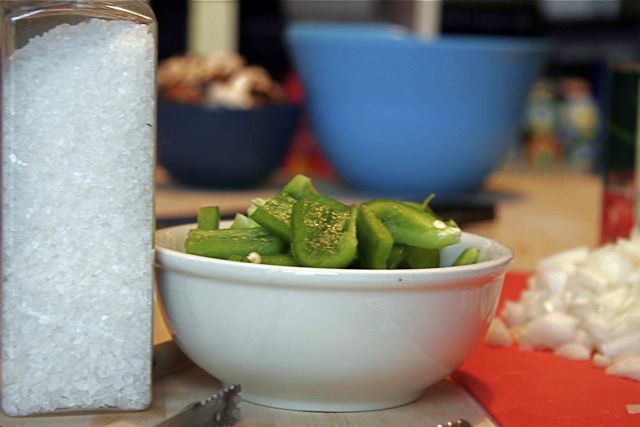 Diced green bell pepper and lots of onion. Dicing onions made poor Meg and Claire cry! A tip: use a sharp knife. The less contact the knife makes with the onion, the less juice explodes into your sensitive eyes. Post-ratatouille making, I definitely went out and bought a new knife and sharpener. It was time to retire the old one.

Meanwhile, we diced 1 large onion, a few cloves of garlic, a large green bell pepper, and about 5 brown mushrooms. (The mushrooms weren’t called for in Julia’s recipe, but I had them on hand and love them, so they went in.) 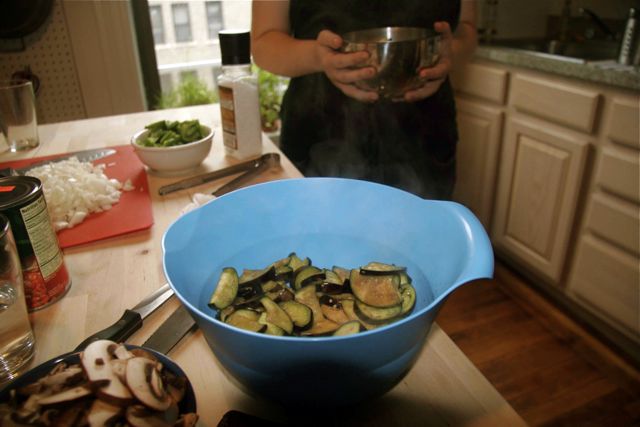 We then sautéed the eggplant and zucchini in hot olive oil, browning both sides of each slice lightly and removing them to a side dish. 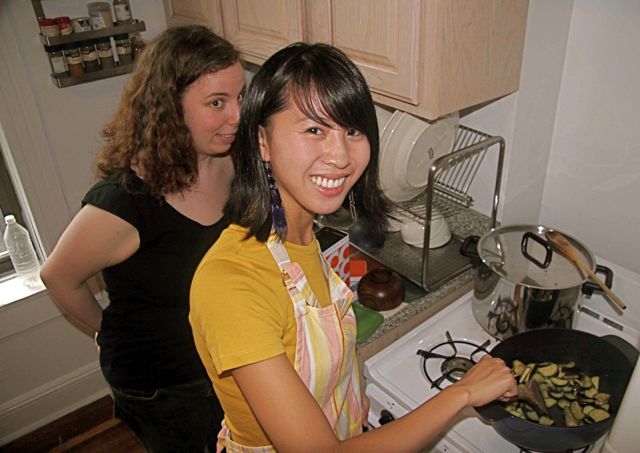 Here Meg and I are sautéing the zucchini slices. Who knows what secret ingredient Meg is slyly planning to slip in?

In the same dutch oven, we cooked the onions, mushrooms, and peppers slowly in olive oil, until they were “tender but not brown.” We then stirred in the garlic and seasoned with some salt and pepper.

Instead of peeling, seeding, and juicing tomatoes to create a pulp (as Julia calls for in her recipe), I bought a can of diced tomatoes, which seemed to work just as well. We threw these in with the onions and peppers, and let the mixture simmer a bit. Then we put in the rest of the eggplant and zucchini (neglecting to layer each slice—we thought it was prettier and tastier all mixed in!), and a few tablespoons of parsley from my potted plant. 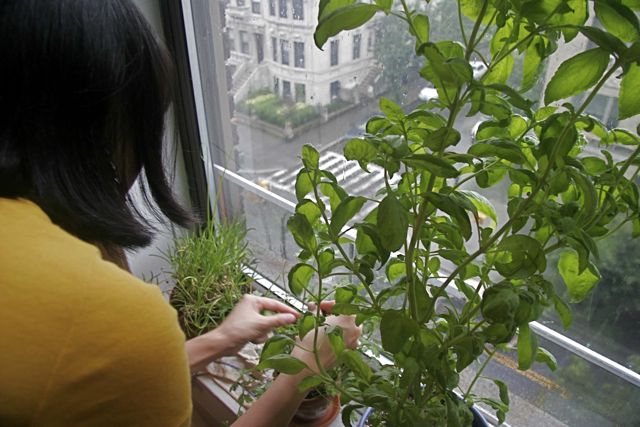 Gathering some parsley from my plant. 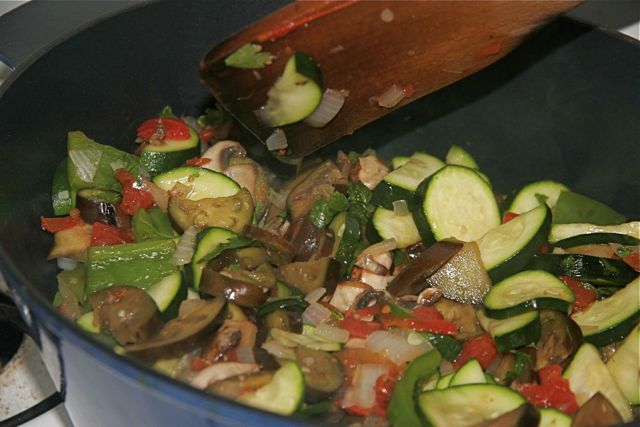 Simmering away… Beautiful, isn’t it?

The casserole simmered over low heat for another 10 minutes, and was very tasty indeed. 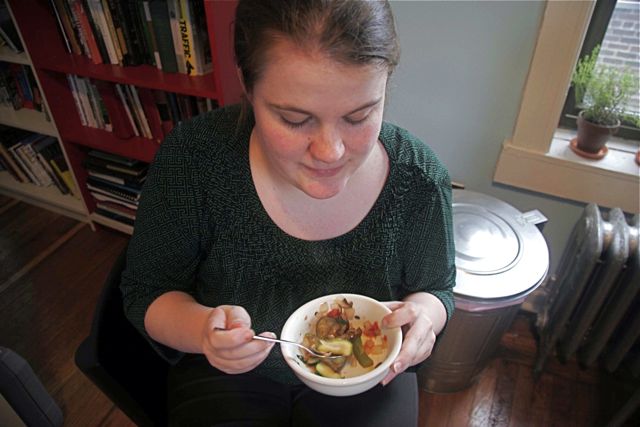 Andrea has the first taste. She approves. 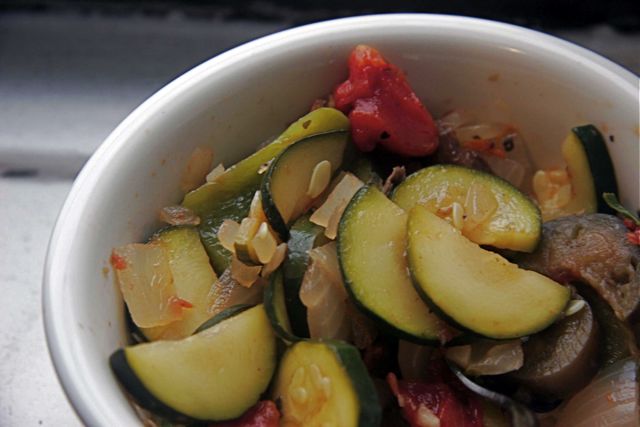 A hearty, satisfying bowl of ratatouille. 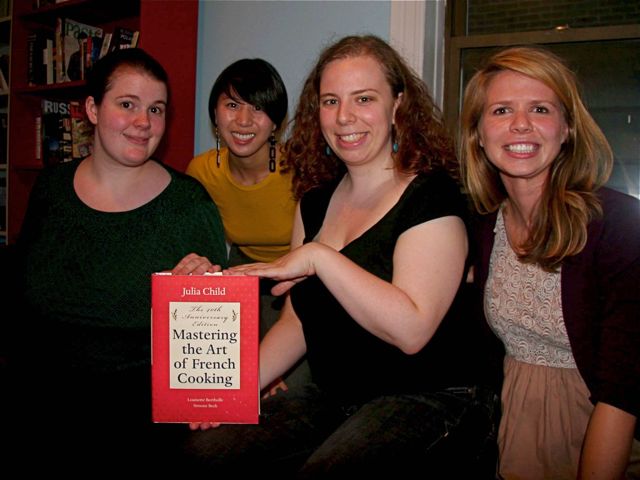 From left to right: Andrea, Florence, Meg, and Claire. And Julia, of course, is front and center.