The Gone-Away World by Nick Harkaway 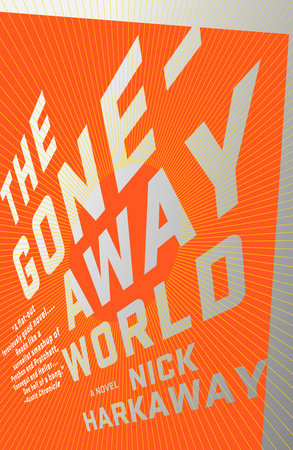 “We stared at the screen and tried to make sense of what was on it. It looked, for a moment, as if the Jorgmund Pipe was on fire—but that was like saying the sky was falling…. Everyone in the Livable Zone was united in the desire to maintain and safeguard it. There was absolutely no chance that it could imaginably, conceivably, possibly be on fire. It was on fire in a big way.”

The last thing the world needed was a fire along the Jorgmund Pipe. But there it was—burning bright and on national television. The Pipe was the backbone of the gone away world. It was the only thing keeping the Liveable Zone safe from the bandits, monsters, and nightmares that the Go Away War left in its wake. The fire was a problem. It was a very big problem.

And now Gonzo Lubitsch and his sidekick—his chronicler and best friend—have been for the incredibly perilous mission of saving the world. They quickly see that this assignment is far more complex than it seems, and before it is over, they will have encountered everything from ninjas to mimes to one ultra-sinister mastermind, whose only goal is world domination.

Read an excerpt of The Gone-Away World.

“A digressive, panoptic, sci-fi, kung-fu epic…. Few books have shown us such a good time all year…like throwing a star to the heart.”
—Time Out, Chicago

“A flat-out ferociously good novel…. Reads like a surrealist smashup of Pynchon and Pratchett, Vonnegut and Heller…. One hell of a bang.”
—Austin Chronicle

“Bewilders, amazes, entertains…. A Catch-22 for the 21st century…. A work of extra ordinary imagination and charisma.”
—The New York Observer