Julia vs. Lidia: A Culinary Showdown

This past weekend, my co-workers in the Knopf Doubleday advertising, promotions, and new media department prepared two recipes by Julia Child and two more recipes by Lidia Bastianich. The bake-off resulted in a delicious after-work gathering. And lest you accuse me of burying the lead, the showdown was a tasty tie! Here are our reports: 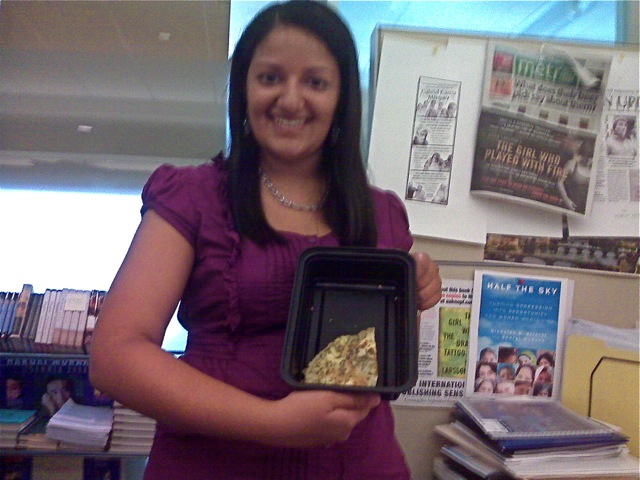 I turned to Lidia’s Family Table for inspiration on what to cook for our office soirée. The dish needed to fit three qualifications: light, bite-size, and tasty. So, I chose Lidia’s Herb Frittata. The recipe called for few, (and most importantly) easy-to-find ingredients.

To prepare the dish, simply follow the directions below:

1. In a bowl, whisk the eggs, milk, salt, fresh herbs, and asparagus until just blended.

2. Heat the butter and oil in a frying pan, when it starts to sizzle, pour in the eggs, and turn the heat down to low. (At this point the eggs will start to puff up and sizzle – this is a good thing.)

3. Lift a corner of the frittata with a spatula, and check to see if the bottom has browned. When it has, flip the frittata over by giving the pan a firm, quick shake up and over toward you. (Now, I have some skills in the kitchen, but this was beyond me. I resorted to using a spatula in an attempt to prevent egg pieces flying all over my kitchen.)

5. Serve right away, or let cool to room temperature.

I opted to serve the dish cool to my colleagues the next day and they each approved my culinary skills with an affirmative head nod while munching away. I have prepared the frittata a couple of times since my first undertaking, and have decided it makes a lovely breakfast on-the-go as well as tasty companion to a dinner of soup and salad. Hope you enjoy! 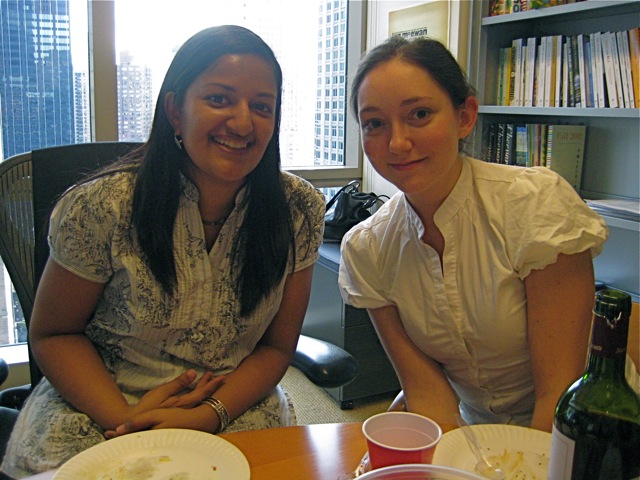 I had never actually prepared an artichoke before embarking on this recipe. This is why I chose to make this dish, to broaden what I cook. And I love finger-foods. The recipe called for six artichoke bottoms. So I had to peel and cut away the outer layers leaving just the base of six artichokes. Surprised by how much artichoke I discarded in this process, I have to say I’m still a little worried I didn’t prepare them exactly right. 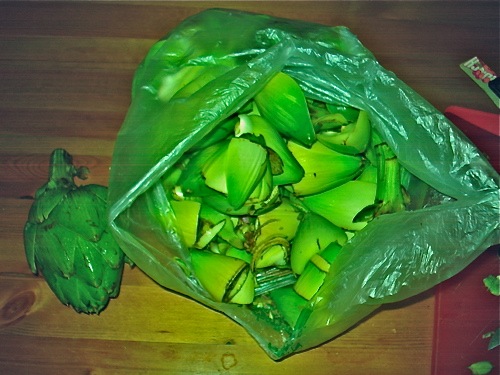 Then I prepared the cream filling and scooped it into the artichokes. This part of the recipe I got exactly right, and it was delicious! Then I baked the bottoms with a little Swiss cheese and, of course, butter, and voilà! 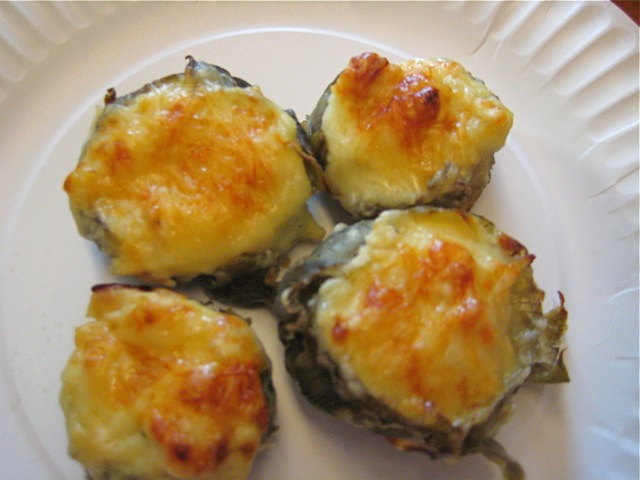 Although I do have to say I am still a little shocked by how little of the original artichoke I used, in the end, these did turn out to be quite delicious. 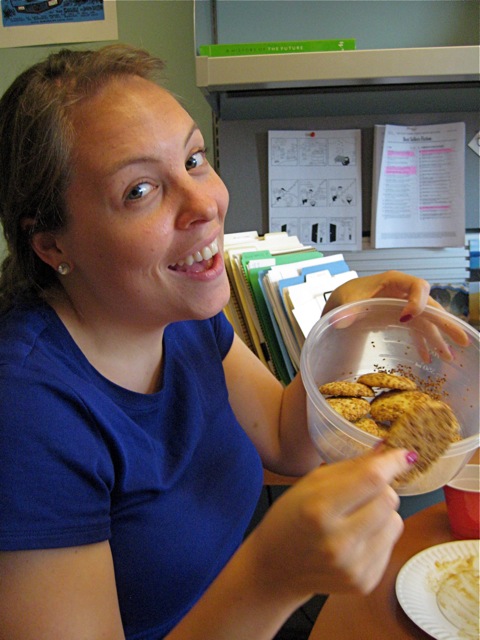 In deciding what to make for our bake-off, I knew I wanted to do something sweet (since Sonia decided on the frittata) and simple (I had just got back to town from a wedding, so my weekend didn’t afford me to prepare the show-stopping dessert like someone in the group who will remain nameless!). Lidia Bastianich’s sesame cookies seemed like a task I could handle.

The process was pretty seamless, except the dough was a bit too sticky to wrap in plastic and then roll out, leading me to neurotically re-read the recipe three times to make sure I wasn’t missing a key ingredient. So, what was to be a biscotti-shaped cookie ended up being ball-shaped. 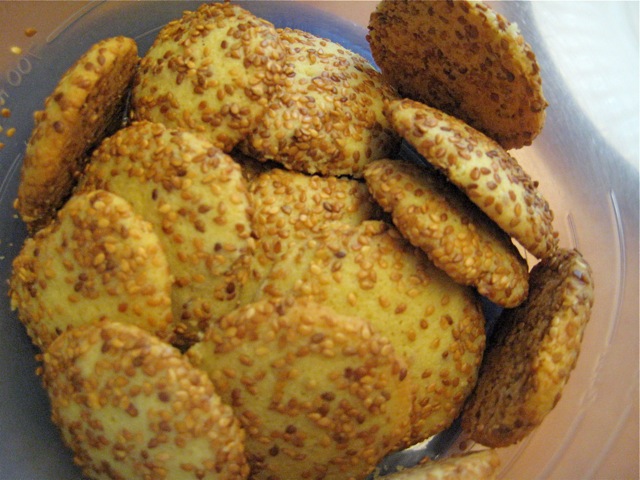 We all agreed the cookie and sesame seeds were a perfect pair. The cookie itself is subtle in flavor but the sesame seeds give it a nice punch. I would suggest putting some jam on it and having it with tea. It’s a great morning/afternoon treat.

All in all, Lidia’s sesame cookies stand a good fight in the cookie arena, but,when Pam rolled in with her pretty peach tart, it was time to throw in the kitchen towel.

Arrange one oven rack in the upper third of the oven and and the other in the lower third. Preheat the oven to 350 degrees F. Spread the sesame seeds out on a baking sheet and bake them on the lower rack until toasted golden brown, about 10 minutes. Shake the pan once or twice as they bake so they toast evenly. While the sesame seeds are toasting lightly grease two baking sheets with some of the softened butter (not necessary for non-stick baking sheets).

Stir the all-purpose flour, semolina flour, baking powder, and nutmeg together in a mixing bowl until blended. Beat the eggs and salt together in a separate mixing bowl with a handheld electric mixer until blended, then beat in the vanilla. Continue beating, adding the sugar gradually until smooth. Drop the eight pieces of butter into the bowl and beat until almost smooth. Pour the dry ingredients into the egg mixture and beat at low speed just until incorporated. Wrap the dough in plastic wrap, and chill at least 1 hour or up to 1 day before forming and baking the cookies

Pinch off a nectarine-size piece of the dough and roll it out with the palm and fingers of your hands, using light pressure, to a rope about 1/2 inch in diameter. Cut the rope into 2-inch lengths, and roll them in the sesame seeds to coat completely. Transfer the coated cookies to the prepared baking sheets, and repeat with the remaining dough and seeds.

Bake the cookies until deep golden brown, about 20 minutes, Rotate the baking sheets from rack to rack and side to side at least once during baking, so the cookies bake and brown evenly. Remove, and cool completely before serving. 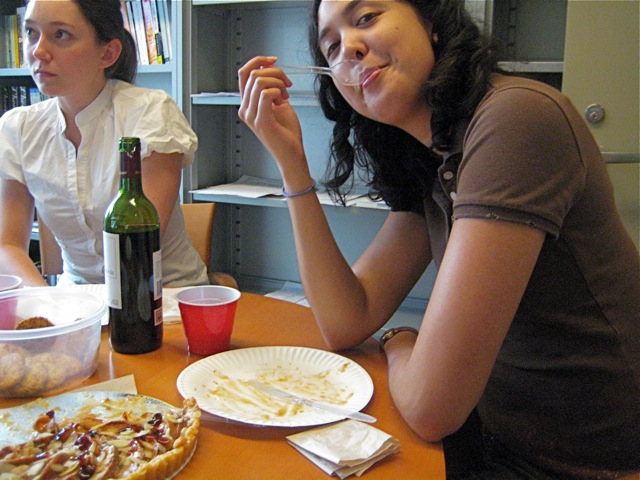 Like the masochist that I am, I volunteered to prepare a recipe from Julia Child’s Mastering the Art of French Cooking. After months of posting recipes from the cookbook and administering a Julia Child contest, it seemed hypocritical of me not to give Julia’s iconic cookbook a go. Since I recently acquired a tart pan for my birthday, I decided upon a tarte aux pêches, or a fresh peach tart.

It was only after I announced my intentions that I realized that Julia’s one-page tart recipe relied upon four ancillary recipes and cooking tutorials. Eek! All of a sudden, my Saturday afternoon activity had turned into a weekend-long self-guided cooking class.

On Saturday morning, I got a head start on preparing the pâte brisée sucrée, aka the sweet short pate that would eventually become my tart’s shell. Mixing the ingredients and working the dough proved no problem (er, aside from a failed first attempt in which I added twice as much butter as was called for), and I learned about the neat trick of the fraisage, or the final blending of the butter with the flour. It essentially involves smearing out the dough bit by bit on a cutting board. Fun!

The real drama set in when I attempted to roll out the dough. I don’t know how people on television roll out these beautiful round discs—mine always look like lopsided asterisks. Nevermind trying to lift the dough—it tore in several places! Muttering apologies to Julia Child (who would undoubtedly respond, “Never apologize!”), I picked up the dough scraps, placed them in the tart pan, and pushed everything around so it once more formed an even layer of dough.

The next few steps passed without incident: I partially baked the shell, using lentils as pie weights because I had no beans in the pantry. Then I blanched the peaches in order to peel and slice them, and I thanked Julia again for the fine tip: having laboriously peeled and sliced peaches without blanching in past recipes, I will never look back.

Applying the apricot glaze to the top of my fully-baked-and-cooling tart proved to be a little more onerous. I had never worked with melting and straining apricot preserves, and so I kept reheating and straining in stuttering steps, to the point where the preserves cooled into a gummy apricot candy. A delicious gummy apricot candy! But certainly not appropriate for glazing. Not wanting to waste a perfectly good jar of apricot preserves, I took the quickly stiffening candy and scattered it across the top of the tart. Not exactly what Julia Child had in mind, but who’s going to complain about a candy-strewn tart? 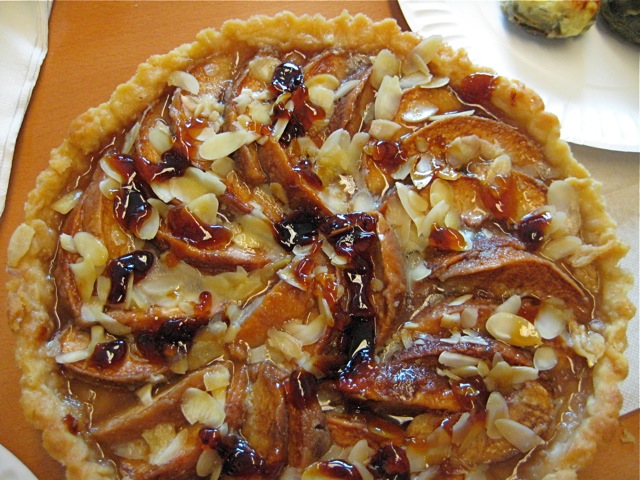 True to my impression, Mastering the Art of French Cooking is less of a cookbook than it is an instruction manual—and I need to practice! Fortunately, practicing never tasted so good.

From our kitchens to your screens (and our bellies), we are… 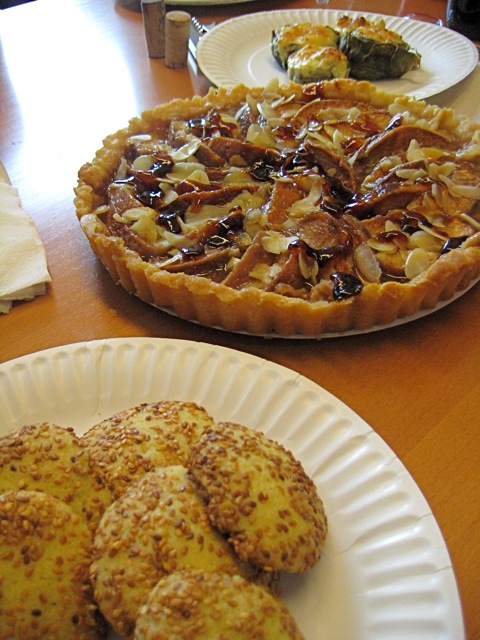