This past weekend, our assistant managing editor Jessica Freeman-Slade prepared two recipes from the new book by the legendary Judith Jones, The Pleasures of Cooking for One. What resulted was a culinary finale to the summer, and an introduction to Judith Jones, the master chef:

Anyone who’s cooked from a Knopf cookbook (be it from Julia Child, Marcella Hazan, Madhur Jaffrey, or any of our other cooks) should know: what you’re reading couldn’t have happened without Judith Jones. Not only did she bring Julia—and sophisticated yet accessible French cooking—to America, but she also introduced a new kind of cookbook writing to legions of American home cooks: concise yet inspiring, clear yet compelling recipes that asked you to understand why you were cooking the way you were, and what lessons you could take away to apply to all future recipes. A summer started to wane, I took advantage of my Labor Day–vacation kitchen to cook up two of the most appetizing recipes from Judith’s new book, The Pleasures of Cooking for One.

As Judith says in her introduction, she questioned her love of cooking after the death of her husband Evan in 1996. “But,” she says, “I soon realized that the pleasure that we shared together was something to honor. I found myself at the end of the day looking forward to cooking, making recipes that work for one, and then sitting down and savoring a good meal.” She goes on to imagine all the possibilities that come with cooking just for yourself: taking charge of your own ingredients and resources, freeing yourself from perfection, and being just a little bit selfish, in the best way possible. “There is something about going home at the end of the day or giving over a quiet Sunday afternoon to cooking—smashing the garlic, chopping an onion, getting all those good cooking smells going, stirring, and tasting mindfully, and then adjusting the seasonings—that makes us feel creative. It is a comforting form of relaxation . . . I always love the moment of drama, too, when everything comes together and I quickly dish up my handiwork. . . . I wouldn’t miss this pleasure for anything.”

Taking Judith’s challenge to heart, I opened up her new book to two perfect end-of-summer recipes: Fillet of Fish in Parchment, and Summer Pudding (each recipe is sized for one serving, yet they were easy to duplicate for two people.)

Fillet of Fish in Parchment

Oil lightly the center of your Silpat mat set on a baking sheet, or, if you don’t have the mat, oil a piece of foil. Scatter the potato slices over the oiled area, then turn them. Salt and pepper lightly. Roast in the preheated oven for 10 minutes, turning once.

Meanwhile, cut off an 18-inch piece of parchment paper, and fold it in half. Open it up, and on one half place the fish alongside the folded edge, after salting and peppering it on both sides (see illustrations on preceding page and opposite). Pile the zucchini, carrot, scallion, and ginger on top of the fish, salt again lightly, and splash on enough wine to bathe the fillet(s) lightly. After the potato slices have had their 10-minute pre-roasting, arrange them on top or around the edge of the fish and sprinkle the herbs over all. Fold the other half of the parchment over, then fold in the open edge twice, and pleat it all around to make a semicircular airtight package. If it tends to open up where the folded edges meet, secure that place with a binder clip or a large paper clip. Place on the sheet pan, and bake for 12 minutes. If you have a fairly thick fillet, you may need to bake it 1 or 2 minutes more. Test with a skewer; if it goes in easily, the fish is done. Plunk the whole parchment package on a big dinner plate, and enjoy.

• ¾ cup blueberries, or other berries (see headnote, where Judith says: “I always remember my childhood summers in Vermont as a procession of summer puddings made with raspberries, blueberries, blackberries, or currants as they came along . . . You can even make Summer Pudding in winter when you may have bought from the local street stand more berries imported from South America than you can eat up.”)
• 1 tablespoon or more sugar
• 2 very thin slices white homemade-type bread (Judith’s note: “If you can’t find really thin-sliced white bread (such as Arnold’s), you can use the standard slice and cut it in half horizontally with a serrated bread knife—not an easy task, but if it breaks, you just patch the pieces back together.”)

Put the berries and sugar in a small saucepan with ¼ cup water. Set over low heat and let cook until soft, not more than 5 minutes. Remove from the heat. Taste when cool enough and add more sugar, if needed.

Meanwhile remove the crusts from the bread and line a 1-cup mold with one slice of the bread, pressing it firmly into the bottom of the cup and up the sides. Tear off pieces of the second slice of bread to fill the gaps in the sides. Pour the berries and their juice into the lined mold and fold any overlapping bread on the top, then fill in the uncovered area on top with the remaining bread. Press down so the juices seep into all the bread, put a plate on top, and refrigerate for several hours or overnight. When you’re ready to eat the pudding, loosen the sides with a knife and then turn the mold upside down onto a plate. It should slip out easily. Enjoy with heavy cream, lightly whipped, if you wish.

(Recipe excerpted from The Pleasures of Cooking for One by Judith Jones. Copyright 2009 by Judith Jones. Excerpted with permission by Alfred A. Knopf, a division of Random House, Inc. All rights reserved. No part of this excerpt may be reproduced without permission in writing from the publisher.)

Judith’s fish in parchment recipe is a classic example of simple, perfectly seasoned cooking—and as she would know, it’s classically French! This is fish cooked en papillote (“in parchment”), which holds steam in to the food as it cooks and keeps the fish and vegetables tender and flavorful. As Pam also noted earlier this summer, summer’s perfect antidote is a big dose of juicy zucchini (and carrot, ginger, scallions, potatoes, and summer herbs can’t be too shabby, either). On our way to our vacation destination, my sous-chef Nick and I passed by a number of fantastic farms, and were able to snag everything from local farm stands. We stopped at both Russell Orchard Farms, where we snagged zucchini, berries, and fingerling potatoes, and at Willow Rest, a former gas station in Gloucester that now carries locally-grown produce, and where we were able to find scallions, ginger, and carrots. (Sadly, the fish we needed came from a grocery store, not from the local cove. Oh well.)

Nick set up in his corner for the pudding, and I tackled the fish. First, thin slices of potato went onto the Silpat sheet for roasting (these are a great investment if you’re tired of scrubbing butter and grease off cookie sheets). The potatoes need to pre-roast because they won’t cook thoroughly if left raw in the parchment paper. 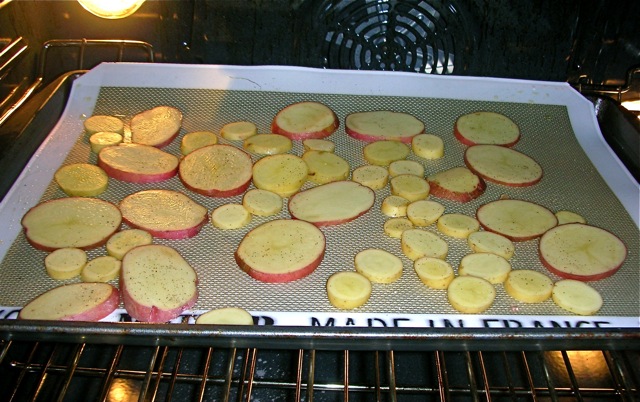 While the potatoes crisped up, I julienned some zucchini, carrots, and scallions. (We should have julienned the ginger, but were dumb and didn’t read very carefully, subsequently leaving the ginger in big coins that gave an unexpected eye-watering punch when eaten whole in the final product.) 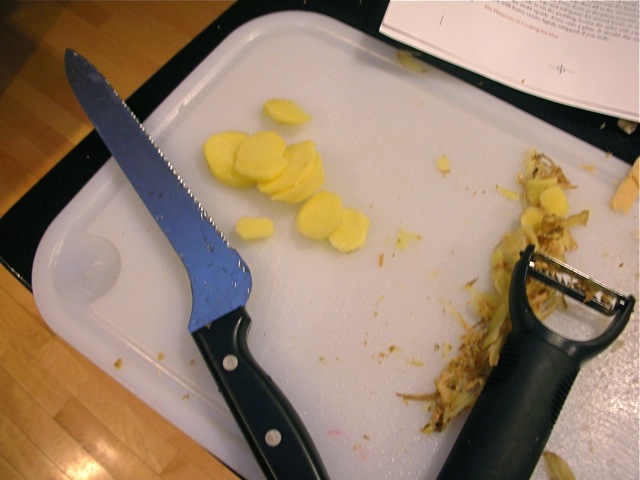 (What NOT to do with the ginger)

Then, after laying down the well–S&Ped fish in the middle of a big piece of parchment (most grocery stores should carry this, but you can always use a piece from a clean paper bag), we piled the vegetables on top of the fish, and added a splash of wine. 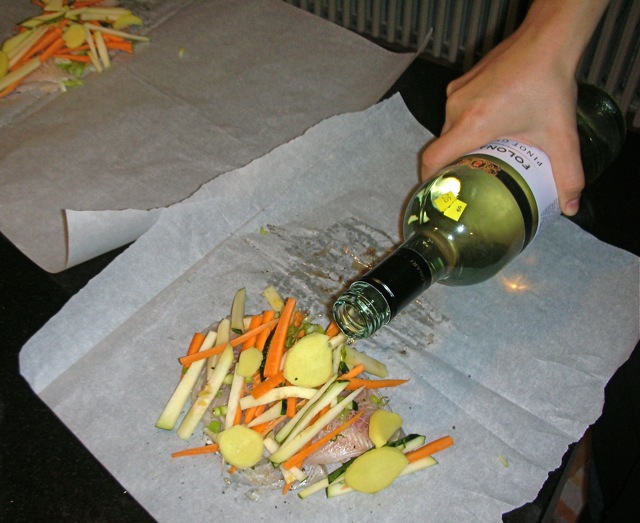 Then we sprinkled on the perfectly roasted potatoes and some fresh herbs (this time, parsley and tarragon—Judith recommends no specific amount, just a nice small handful to keep things flavorful). Then, using the gorgeous photographs from the book as a guide, you fold over the parchment paper and crimp the whole thing around until it looks like a giant paper empanada. (Judith says to secure the package with paper clips if necessary.) 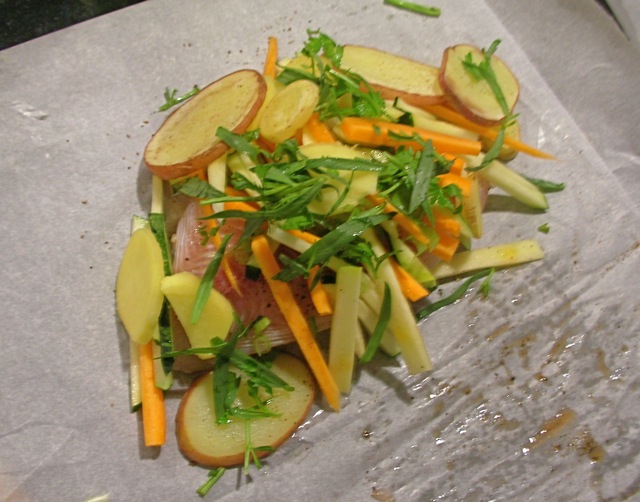 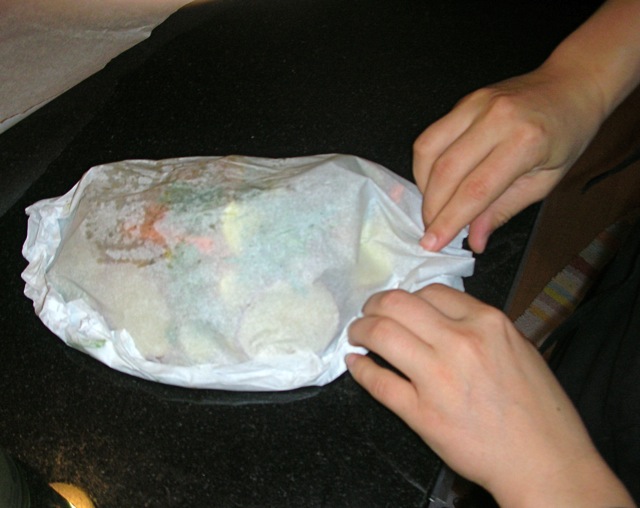 After popping the fish packets in the oven, I turned my attention to Nick and his pudding–making in the corner. I must confess that I’m a bit of a pudding neophyte, and I expected something a little bit more like what Bill Cosby had been pushing on me through my formative childhood years. But I could see that Judith had something very different in mind…

The berries were boiling away with sugar, and couldn’t have been more photogenic. And though our bread wasn’t quite as thin as Judith would have liked, they lined the soufflé cups perfectly. 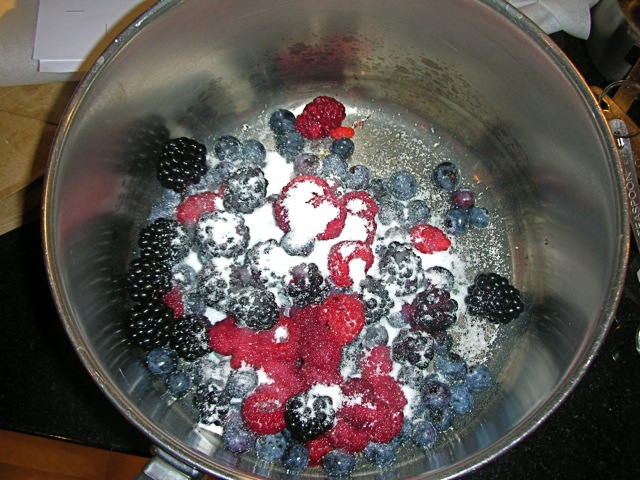 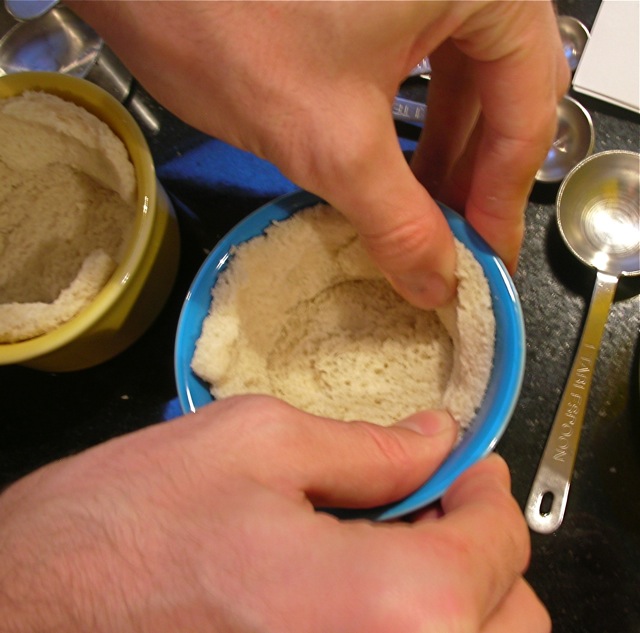 After the berries were softened, he filled the bread cups with warm fruit, and then covered it with another layer of bread, creating a kind of improvised Twinkie-like casing. 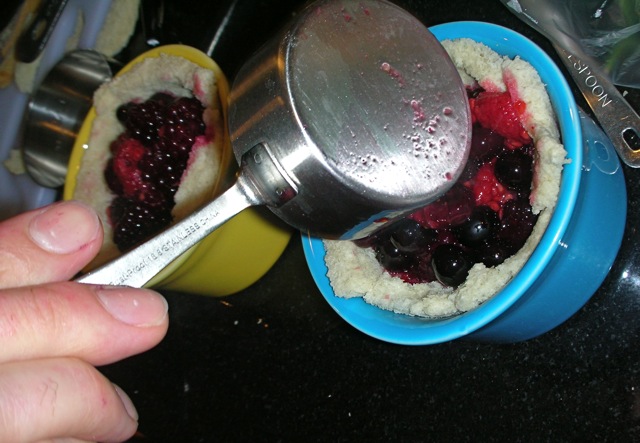 Then the whole thing went into the refrigerator, stacked with plates ready for turning over and eating in a few hours. 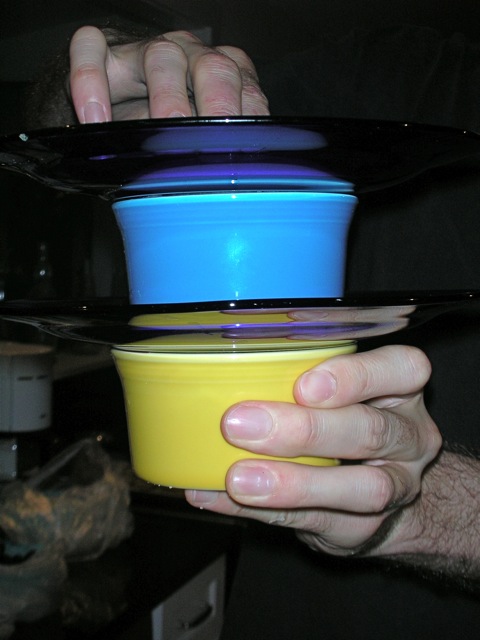 Just when the pudding went into the refrigerator, the fish was ready! We each took a crispy brown parchment packet onto our plates, along with a helping of one of Judith’s other recipes, Potato Dish for Julia (yes, that Julia), and… 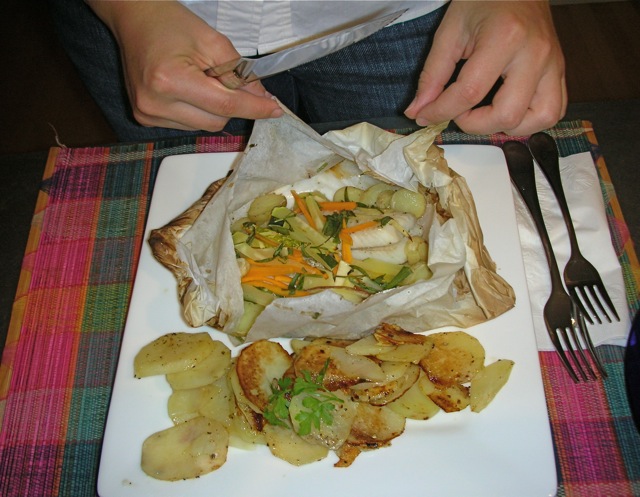 The fish and vegetables had cooked perfectly, smelled divine, and looked beautiful as well. 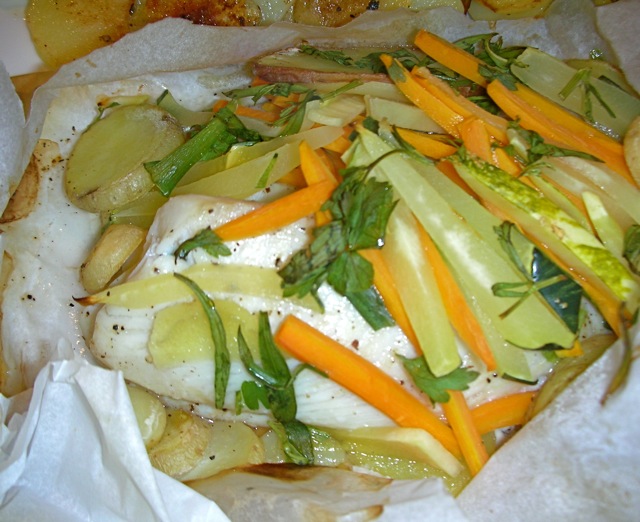 Minus the aforementioned ginger attack, every bite of this was light, well-seasoned, and completely satisfying. 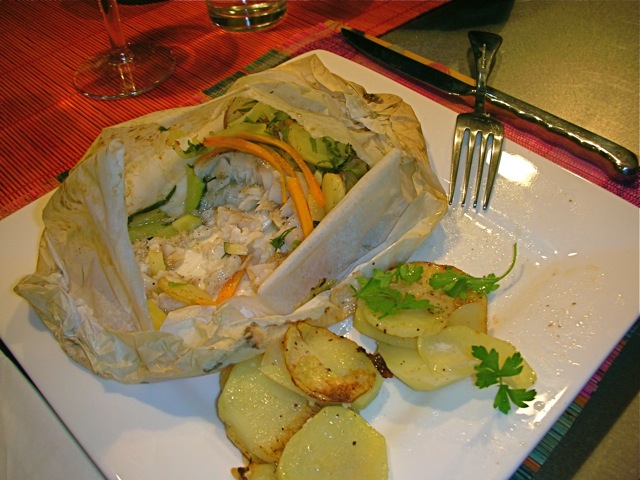 And as a late-night treat, we went back to try the pudding, with some freshly whipped cream: 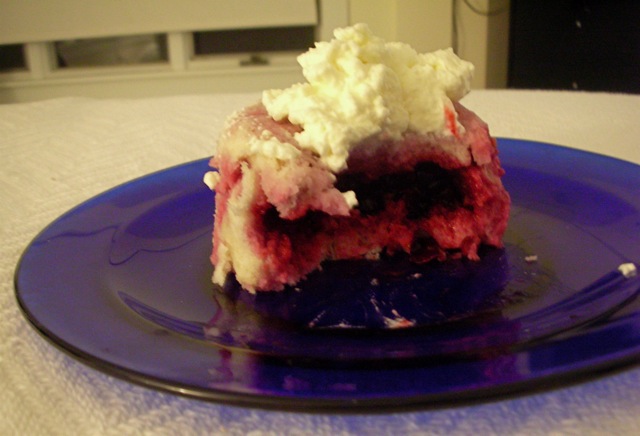 Upon first bite, Nick declared, “We are definitely making this again…” Over just a few hours in the fridge, the berries had soaked into the bread and become transcendentally delicious. If our dinner was a hit, this dessert was a home run.

We concluded from these two dishes that, not only can Judith Jones edit the best chefs, but she should be counted among them. These recipes earned a permanent place in my repertoire—thank you Judith, for a fantastic meal!