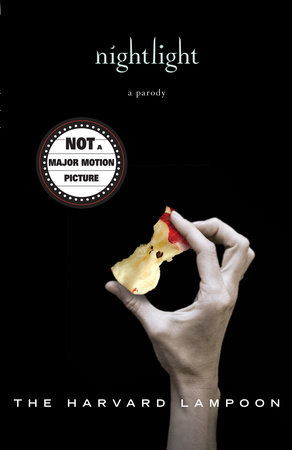 VINTAGE BOOKS TO PUBLISH NIGHTLIGHT: A TWILIGHT PARODY
AS A VINTAGE ORIGINAL IN TIME FOR THE MAJOR MOTION PICTURE RELEASE OF TWILIGHT SEQUEL “NEW MOON”

New York, NY 10/05/09: Vintage Books announces the publication of the first Harvard Lampoon novel parody in exactly 40 years. In 1969, The Harvard Lampoon took affectionate aim at a massive pop culture phenomenon with Bored of the Rings. The paperback original Nightlight, a pitch-perfect spin on the Stephanie Meyers series, will be available on NOVEMBER 3. The Twilight movie sequel, “New Moon,” arrives in theaters on November 20.

“Funny” might get you a blog post these days, but it’s the Lampoon-level of satire that makes Nightlight worth every pseudo-bloodsucking, angst-ridden page. Nightlight stakes at the heart of what makes Twilight tick…or, really, cuts to the core of it. As demonstrated by the cover of the book. Or takes a bite out of it, as also demonstrated by the cover of the book. Brooding and hilarious, let Nightlight be your guide through the Twilight fandom that has eclipsed the mind of every teenager you have ever met.

Pale and klutzy, Belle Goose arrives in Switchblade, Oregon looking for adventure, or at least an undead classmate. She soon discovers Edwart Mullen, a super-hot computer nerd with zero interest in girls. After witnessing a number of strange events—Edwart leaves his Tater Tots™ untouched at lunch! Edwart saves her from a flying snowball!—Belle has a dramatic revelation: Edwart is a vampire. But how can she convince Edwart to bite her and transform her into his eternal bride, especially when he seems to find girls so repulsive? Complete with romance, danger, insufficient parental guardianship, creepy stalker-like behavior, and a vampire prom, Nightlight is the uproarious tale of a vampire-obsessed girl, looking for love in all the wrong places.

About The Harvard Lampoon

The first volume of the Lampoon appeared in February, 1876. Written by seven undergraduates and modeled on Punch, the British humor magazine, the debut issue took the Harvard campus by storm. “Our success was immediate,” wrote founder John Tyler Wheelwright. “Our first edition of twelve hundred was sold at once.” United States President Ulysses S. Grant was advised not to read the magazine, as he would be too much “in stitches” to run the government.

While no human was safe from jests within the magazine, the Lampoon soon branched out, supplementing its regular issues with parodies of other publications. The first target was Life, which the Lampoon parodied in 1896. But from the beginning, the Lampoon found its richest source of parodies and fake-issues in the Harvard Crimson, the daily newspaper that seems so bad as to be inimitable.

The Lampoon was led by such figures as humorist Robert Benchley ‘12, novelist John Marquand ‘15, poet David McCord ‘21, and communist agitator John Reed ‘10. Under Reed’s term as president, the Lampoon evolved from salacious puns and localized “Harvard humor” to highly literate, scathing social commentary. Influenced heavily by The New Yorker, Lampoon editors developed a knack for short fiction, punchy cartoons, cutting-edge layout, and jet-set cocktail-party success. When local authorities banned a bawdy parody of Esquire in 1935, Lampoon members pretended to burn issues in a bonfire outside the Castle while selling the parody out the side door. During this period, the Lampoon also invented the word “pizzazz” and began its annual “Movie Worsts” issue, a tradition that held until the mid-1990s, when people stopped going to movies.

In the Lampoon’s “Golden Period,” 1946-1961, the magazine took its parodies to the national level, consensually distributing fake issues of Mademoiselle alongside the actual issues. Three notable alumni—George Plimpton ‘48, actor Fred Gwynne ‘50, and John Updike ‘54—flashed comedy chops during this time, as all three men served as Lampoon presidents. Following the “Shit Period” (1962-1975), the Lampoon entered a second “Golden Period” from 1975 to the present day. The lengthy stories in older issues have been eliminated in the modern Lampoon, which boasts lightning-quick, joke-heavy “kind-of-stories” that are so hilarious as to be a medical risk for some.

Download a pdf file of this press release here.