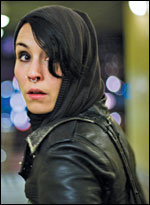 Yesterday Variety announced that the U.S. film rights to Stieg Larsson’s Millennium series, which includes The Girl with the Dragon Tattoo, The Girl Who Played with Fire, and the forthcoming Girl Who Kicked the Hornet’s Nest, have been picked up by Music Box Films.

The Girl with the Dragon Tattoo, which stars Michael Nyqvist and Noomi Rapace, will hit American theaters in early 2010. See you there!