A Note from Graeme Gibson 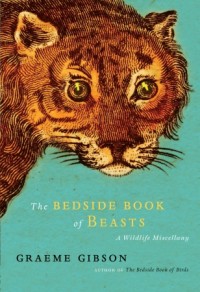 “the natural world is imbedded in our genes and cannot be eradicated.” —E. O. Wilson

The Bedside Book of Beasts follows on the heels of my Bedside Book of Birds, and is intended to complement it. Whereas birds are associated with creativity, longing, and imagination—with spiritual matters rather than earthly ones—beasts are overwhelmingly physical. They and we—our animal side—are the body itself, with all its physical hungers, its strength and joyfulness, its vulnerability, grace, inventiveness, and courage—and, beyond that, its mortality.

This miscellany is devoted to alpha predators and their prey. They are central to us, and to our understanding of our place in nature, because the primal fact of hunting and/or being hunted, and the inescapable demands of hunger, have largely defined animal life on earth, and are undoubtedly among the key engines driving evolution. We are what we are largely because we must eat—and have lived in danger of being eaten. Dean William Inge, the “Gloomy Dean”, isn’t far wrong when he says, “The whole of nature… is a conjugation of the verb to eat, in the active and passive.”

Those who have had the good fortune to walk in a landscape harbouring carnivores bigger and more powerful than ourselves know that such an experience can evoke a profound sense of the relationship that we—we human animals—have always had with true wilderness—for wilderness almost invariably contains an alpha predator. Indeed, there is good reason to believe that without an alpha predator there is no true wilderness. But more of that elsewhere.

I recently returned, for the first time in sixty-two years, to a lake where I’d spent three summers at a boys’ camp during the War. Punctuated now with cottages along the shore, the low tight forest had nevertheless overgrown the place where the camp had been. Preparing for bed that evening in the old log house of friends, I listened to the distant thumping bass of a boom-box somewhere back along the road, and what sounded like the strangled chatter of an amplified disc-jockey.

At camp, it was the freedom of canoe trips I fed on. We slept in blanket-rolls wrapped in groundsheets, with our heads under overturned canoes if it rained. Lying beneath the stars and spiky conifers, I imagined feeling the curve of the turning earth beneath me. I already knew the cries of loons and had heard owls calling at night from a wet cedar bush, but I was utterly unprepared for the explosive rising call of a wolf that jolted me from sleep one night. It was a sound that Aldo Leopold describes as “an outburst of wild defiant sorrow, and of contempt for all the adversities of the world.” The wolf’s family quickly joined in with a hair-raising chorus of harmonic howls over a cacophony of underlying yips and barks. Then just as suddenly as the chorus began, it stopped. It was an enchanting gift for an eleven-year-old boy from the city, and I had to wait fifty years before receiving it again. I was transfixed on that occasion, too, as if those ancient voices had once again touched something in me that I almost remembered.

We harbour an ancient animal memory in our being. Although largely inaccessible, its shadows dwell in our instincts, just as they stir in our dreams and fears. Sometimes they can be sensed in the beating of our hearts, or in an unexpected encounter with wild creatures—the sudden howling of wolves, or the appearance of a stag that stares intently before vanishing over the edge of a hill.

Not surprisingly, there is growing evidence that spending time in the natural world restores and even heals us in remarkable ways. Not only can it reduce stress, lower blood pressure, and strengthen the immune system, it has been shown to bolster the attention span of children and shorten the healing process for post-operative adults.

While this book explores these and other ideas, it also strives to celebrate the deeply moving truth of creatures that are truly wild. Although tragically diminished, the natural world that made us is out there still. With effort and some passing luck, we might find our own ways of reconnecting, and in doing so learn to honour our ancient and long-standing debt to life on earth.