Now On Sale: Lidia Cooks from the Heart of Italy 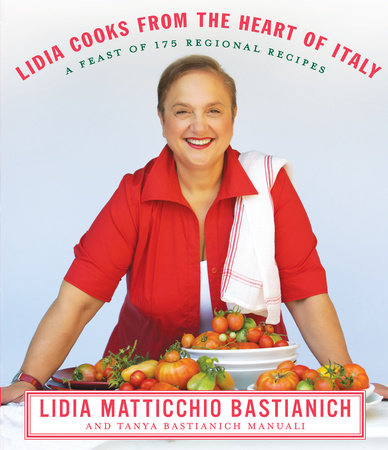 In this inspiring new book, Lidia Bastianich awakens in us a new respect for food and for the people who produce it in the little-known parts of Italy that she explores. All of the recipes reflect the regions from which they spring, and in translating them to our home kitchens, Lidia passes on time-honored techniques and wonderful, uncomplicated recipes for dishes bursting with different regional flavors—the kind of elemental, good family cooking that is particularly appreciated today.

Penetrating the heart of Italy—starting at the north, working down to the tip, and ending in Sardinia—Lidia unearths a wealth of recipes:

From Trentino–Alto Adige: Delicious Dumplings with Speck (cured pork); apples accenting soup, pasta, salsa, and salad; local beer used to roast a chicken and to braise beef
From Lombardy: A world of rice—baked in a frittata, with lentils, with butternut squash, with gorgonzola, and the special treat of Risotto Milan-Style with Marrow and Saffron
From Valle d’Aosta: Polenta with Black Beans and Kale, and local fontina featured in fondue, in a roasted pepper salad, and embedded in veal chops
From Liguria: An array of Stuffed Vegetables, a bread salad, and elegant Veal Stuffed with a Mosaic of Vegetables
From Emilia-Romagna: An olive oil dough for making the traditional, versatile vegetable tart erbazzone, as well as the secrets of making tagliatelle and other pasta doughs, and an irresistible Veal Scaloppine Bolognese
From Le Marche: Farro with Roasted Pepper Sauce, Lamb Chunks with Olives, and Stuffed Quail in Parchment
From Umbria: A taste of the sweet Norcino black truffle, and seductive dishes such as Potato-Mushroom Cake with Braised Lentils, Sausages in the Skillet with Grapes, and Chocolate Bread Parfait
From Abruzzo: Fresh scrippelle (crêpe) ribbons baked with spinach or garnishing a soup, fresh pasta made with a “guitar,” Rabbit with Onions, and Lamb Chops with Olives
From Molise: Fried Ricotta; homemade cavatelli pasta in a variety of ways; Spaghetti with Calamari, Shrimp, and Scallops; and Braised Octopus
From Basilicata: Wedding Soup, Fiery Maccheroni, and Farro with Pork Ragù
From Calabria: Shepherd’s Rigatoni, steamed swordfish, and Almond Biscottini
From Sardinia: Flatbread Lasagna, two lovely eggplant dishes, and Roast Lobster with Bread Crumb Topping

This is just a sampling of the many delights Lidia has uncovered. All the recipes she shares with us in this rich feast of a book represent the work of the local people and friends with whom she made intimate contact—the farmers, shepherds, foragers, and artisans who produce local cheeses, meats, olive oils, and wines. And in addition, her daughter, Tanya, takes us on side trips in each of the twelve regions to share her love of the country and its art.

Lidia Mattichio Bastianich is the author of four previous books, three of them accompanied by nationally syndicated public television series. She is the owner of the New York City restaurant Felidia (among others), and she lectures on and demonstrates Italian cooking throughout the country. She lives on Long Island, New York. Lidia Bastianich is represented by the Random House Speakers Bureau.

Tanya Bastianich Manuali, Lidia’s daughter, received her Ph.D. in Renaissance history from Oxford University. Since 1996 she has led food/wine/art tours. She lives with her husband and children on Long Island.