The Complete Lyrics of Johnny Mercer 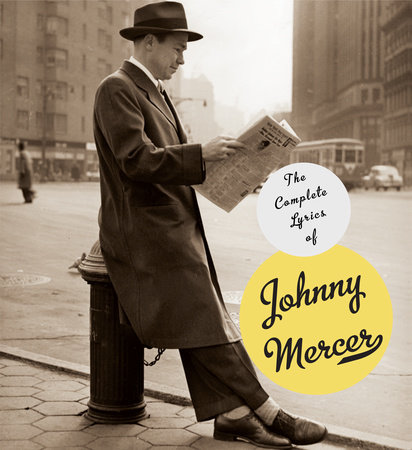 The seventh volume in Knopf’s critically acclaimed Complete Lyrics series, published in Johnny Mercer’s centennial year, contains the texts to more than 1,200 of his lyrics, several hundred of them published here for the first time.

Johnny Mercer’s early songs became staples of the big band era and were regularly featured in the musicals of early Hollywood. With his collaborators, who included Richard A. Whiting, Harry Warren, Hoagy Carmichael, Jerome Kern, and Harold Arlen, he wrote the lyrics to some of the most famous standards, among them, “Too Marvelous for Words,” “Jeepers Creepers,” “Skylark,” “I’m Old-Fashioned,” and “That Old Black Magic.”

During a career of more than four decades, Mercer was nominated for the Academy Award for Best Song an astonishing eighteen times, and won four: for his lyrics to “On the Atchison, Topeka, and the Santa Fe” (music by Warren), “In the Cool, Cool, Cool of the Evening” (music by Carmichael), and “Moon River” and “Days of Wine and Roses” (music for both by Henry Mancini).

You’ve probably fallen in love with more than a few of Mercer’s songs–his words have never gone out of fashion–and with this superb collection, it’s easy to see that his lyrics elevated popular song into art.

Robert Kimball was educated at Yale College and Yale Law School. He has been the music critic of the New York Post and is the co-author or editor of many books on musical theater, including Cole, the celebrated book about Cole Porter that he edited with Brendan Gill. He also edited for the Complete Lyrics series the volumes of Cole Porter, Lorenz Hart, Ira Gershwin, Irving Berlin, and Frank Loesser. He is co-editor, with Robert Gottlieb, of Reading Lyrics. He lives in New York.

Barry Day was born in England and is an MA from Balliol College, Oxford. He has written or edited some twenty books as well as plays and musical revues showcasing the work of Dorothy Parker, P. G. Wodehouse, the Lunts, Oscar Wilde, and Sherlock Holmes. His eight books on Noël Coward include Noel Coward: The Complete Lyrics. He has also edited P. G. Wodehouse: The Complete Lyrics. He is a Trustee of the Noël Coward Foundation, a board member of Shakespeare’s Globe Theatre, and winner of an ASCAP Deems Taylor Award. He was awarded the Order of the British Empire “for service to British Culture in the United States.”

Miles Kreuger is a native New Yorker and a graduate of Columbia Grammar School and Bard College. He has been writing about musical theater and film since 1958, including the definitive study of Show Boat. In 1965, he created the world’s first academic course on the American musical, at New York University, and has since taught at Columbia, the University of Southern California, and UCLA. He is president of The Institute of the American Musical and lives in Los Angeles.

Eric Davis is an avid student of nineteenth- and twentieth-century American popular music. He received his BA from Indiana University and is currently pursuing graduate studies in musicology at the University of Southern California.