The Private Patient by P.D. James 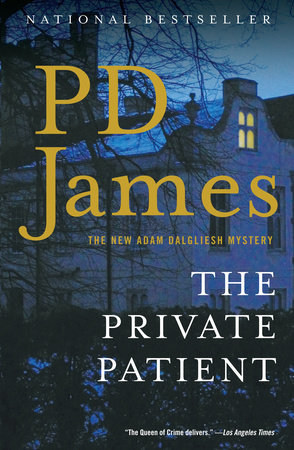 “No one is better than James at maintaining this tension between the cozy and the frightful.”—The Washington Post

“[James is] a master…Nothing is as it first appears.”—The Boston Globe

Cheverell Manor is a beautiful old house in Dorset, which its owner, the famous plastic surgeon George Chandler-Powell, uses as a private clinic. When the investigative journalist, Rhoda Gradwyn, arrives to have a disfiguring facial scar removed, she has every expectation of a successful operation and a peaceful week recuperating. But the clinic houses an implacable enemy and within hours of the operation Rhoda is murdered. Commander Dalgliesh and his team are called in to investigate a case complicated by old crimes and the dark secrets of the past. But Before Rhoda’s murder is solved, a second horrific death adds to the complexities of one of Dalgliesh’s most perplexing and fascinating cases.