In seventh grade, my intro chemistry teacher gave me an assignment: write a lab report on how to make a peanut butter and jelly sandwich. The class laughed, but he kept a straight face. “I want you to write me instructions as though I had never made this sandwich before. What items do I need? How much of each item? Should I use chunky peanut butter, or smooth? What kind of jelly? Do I spread it on the peanut butter, or on the other piece of bread?” He was asking us to think of cooking, of recipes, as a chemical reaction schema, a series of steps leading to a result that we had no previous knowledge of, to a final product we had never before seen. Cooking is the only kind of chemistry I’ve ever understood, and that lab report was the only A I got that entire semester.

Jason Epstein is no scientist—or if he is, he’s a mad scientist. “I seldom cook by numbers,” he says. “Recipes should be more like stories than like maps or formulae.” There is no list of ingredients, or step-by-step instructions; rather, he brackets his recipes with stories. It’s as though he’s standing beside you in the kitchen, a vague yet eternally helpful sous-chef.

This past weekend, I opened his new book, Eating, and right from the beginning of his chicken pot pie recipe, it’s clear that Epstein is more interested in how we experience food than the food itself. Epstein first started cooking while watching his grandmother Ida, who he said, “was not a great cook and not always even a very good one, but she tried. Her grandchildren respected and loved her and went along with the pretense that her food was delicious. Or perhaps, being children, they didn’t know any better.” Epstein doesn’t mince words about his grandmother’s culinary imperfections:

“My grandmother was a brave and cheerful soul . . . but some of her special dishes I recall to this day with dismay, especially her chicken pot pie made from a worn-out laying hen. The crust, shiny on top, was gummy underneath, the broth was thin, and the chicken itself overcooked, dry, stringy, and tasteless. Yet our family romance declared her chicken pie a favorite, and my cousins and I dutifully cheered when my dear, beaming grandmother brought the pie in from the kitchen. . . . There was joy despite the pie. She wanted us to be happy, and we were eager to accommodate her belief that the pie made us so.” (p. 14)

Maybe Epstein tells this story to make his own recipe sound delicious by comparison, or maybe he tells it to explain why he so endeavored to reinvent this dish. Either way, Epstein’s chicken pot pie recipe transcends any gummy, stringy, tasteless grandmother concoction, and as someone not previously a fan of chicken pot pie, I was hooked.

NOTE: Read the entire recipe, all the way through, and make a list of what items you will need ahead of time.

Epstein is demanding: he wants you to make puff pastry by hand. Mix up two and a half cups flour, a pinch of salt, and half a stick of cold butter in a food processor, adding a little cold water as you go, until it forms a “firm, crumbly paste.” Then flatten the dough into a rectangle, then an oblong about an eighth of an inch thing. His recipe, like any good one, involves lots and lots of butter (another stick), which you shape into another oblong to spread on top of the dough. 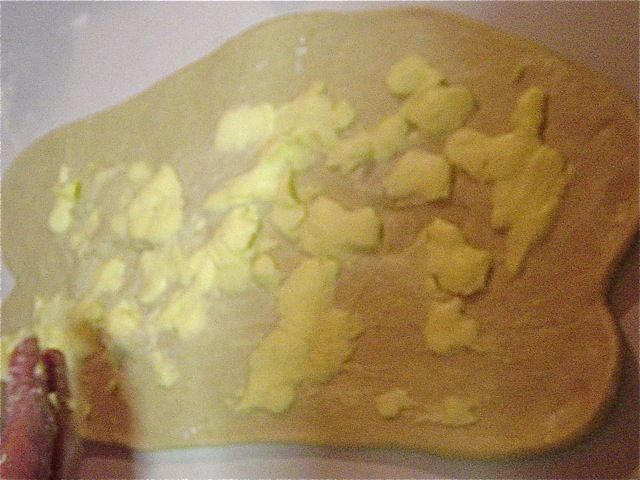 After folding the dough in thirds—“like a letter”, he says—to seal up the butter inside, you rotate the dough ninety degrees and roll it out like an oblong again, doing this six times until the butter has been thoroughly integrated (though be sure to keep the dough cold, or else the butter will melt rather than blend into the dough). 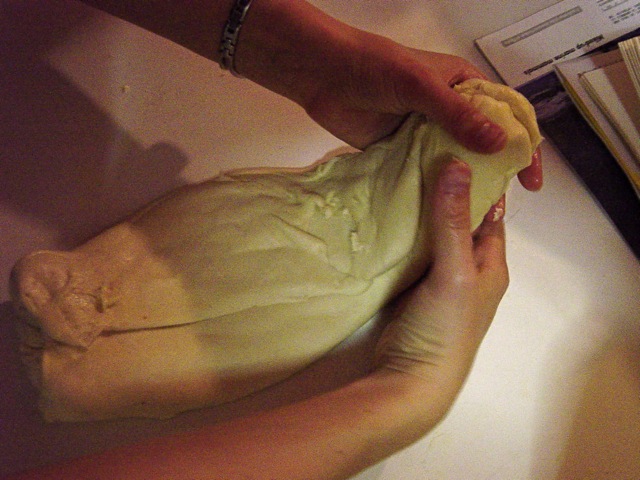 Finally, cut the dough into two rounds (if you’re doing this in a pie pan, use the circumference of the pan as your guide. Lay them on some parchment paper and pop in the oven (preheated to 425 degrees) for about 10 minutes, until they are starting to brown but remain soft. Remove from oven and let cool . . .

Chop two chicken breasts into cubes, pat dry, and toss with hot oil in a heavy Dutch oven (use the same one you used to make boeuf bourguignon). Set the chicken cubes aside and clean the pot. Melt two tablespoons of butter and add a dozen pearl onions (peeled—Epstein suggests you roast them for ten minutes to help the skins slip off easily). Add the onions to the chicken, and add to your now-empty pot one cup chopped carrots, one cup diced celery, one diced sweet onion, and a half-pound of bite-size cremini mushrooms. You’ll probably add an extra tablespoon of butter here, just to sauté all the vegetables until they’re soft, 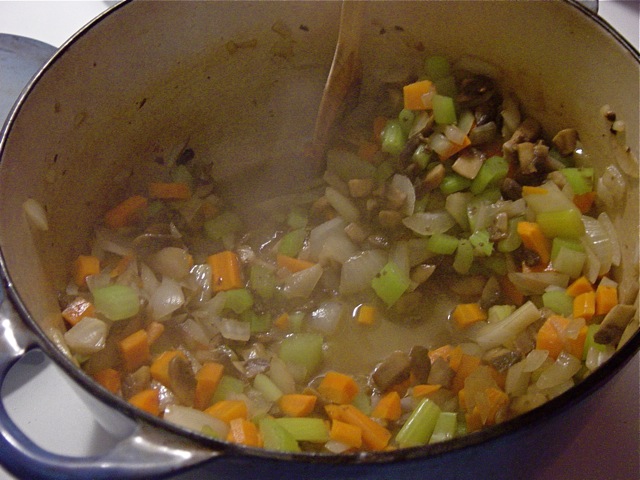 Set aside the cooked veggies and add some frozen peas on top (what’s a good pot pie without peas?) Then clean out the pot again, as you’ll need it to make the gravy . . . 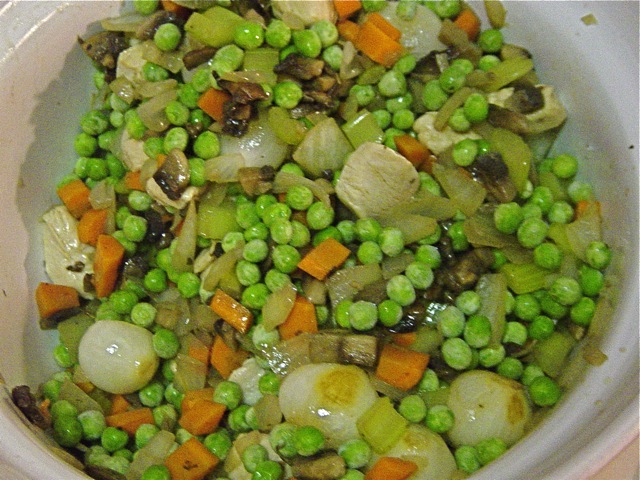 In your now-clean Dutch oven, melt six tablespoons butter, and whisk in three tablespoons of Wondra or arrowroot (substituting flour, cornstarch, or cake flour is fine) until light brown. Whisk in four cups of boiling chicken broth, as well as 1 ½ cups of half and half, three-four tablespoons dry sherry (or dry white wine), and about a handful of chopped rosemary, parsley, and fresh thyme. Add sea salt, pepper, and juice from two lemons, and you’ll start to have a sauce that’s so aromatic, it’ll be hard not to dip your spoon in for a taste (you’ll know it’s done when the spoon is thickly coated). 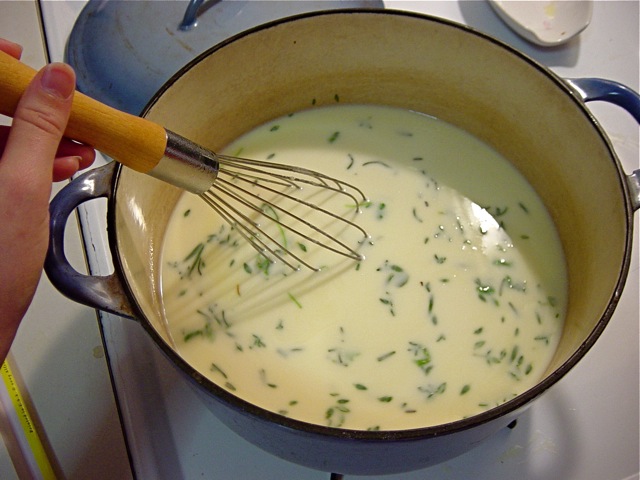 Take the set-aside chicken and vegetables, and stir it into the sauce over medium heat for a few minutes. 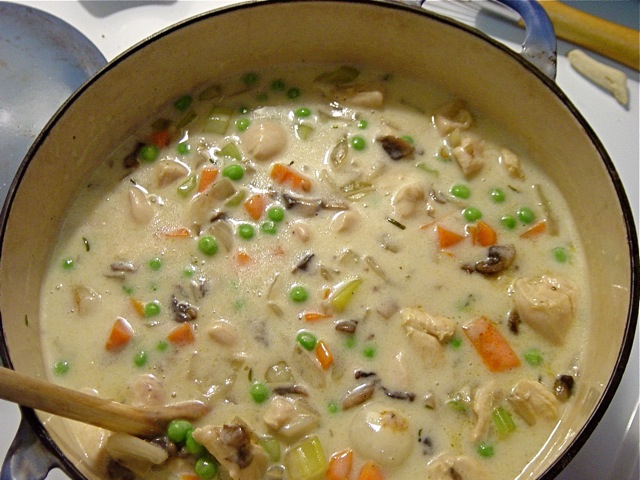 Now here comes the tricky part, and I read the recipe ten times before I figured this out: Epstein doesn’t tell you when to fill the pie crust. He, in fact, doesn’t tell you if has to go in a pan at all. This is one of those times where you realize, with a slight sense of panic, that Epstein has abandoned you . . . is this meant to be a crustless pie? Does he want the crusts to be like a wrapper to the filling, like a chicken pot pie sandwich? Or does he expect you to figure out what you want? I decided to make it a bit more like a conventional pot pie, lining a pan with one round of dough and using the other on top, but since Epstein doesn’t dictate, you can try whatever you like . . . 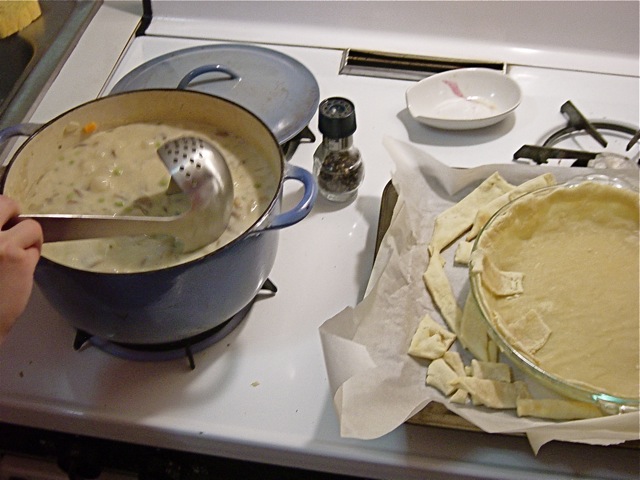 It’s quite likely you’ve made enough filling for more than one pie—freeze the rest, you’ll want a second go-around of this recipe later . . . 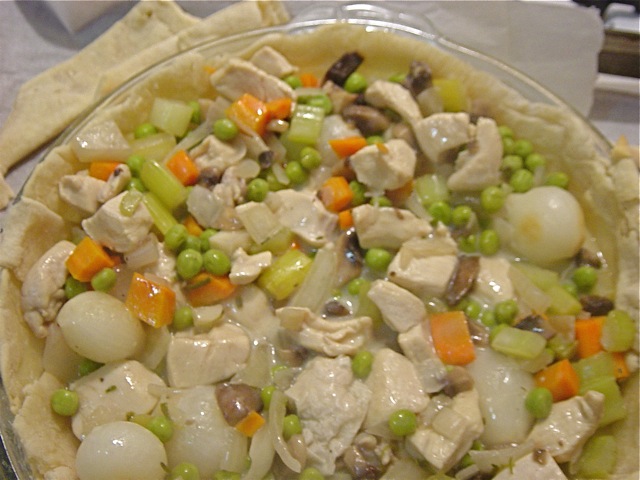 Put one of the pie rounds on top, crimp the edges as best you can (be sure you’ve pricked the top layer with a fork), and put the pie in the oven (at 350°F) for 15-20 minutes, until you can see the juices bubbling through the crust. 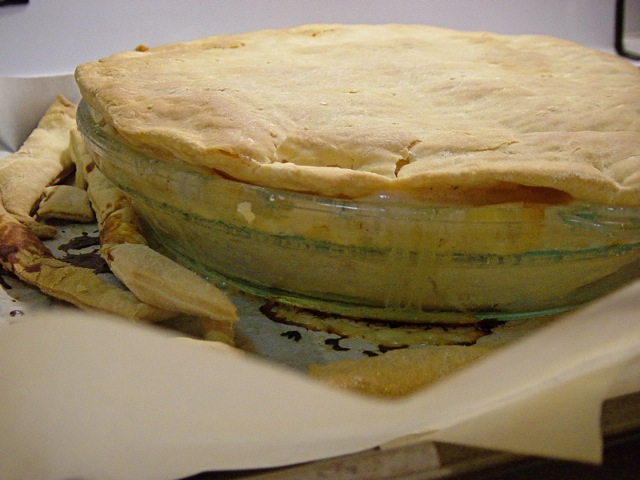 So yes, Epstein left me a bit to my own devices—but how often can you say that a cookbook writer trusts you enough to leave you alone? And as it turned out, the pie was perfect—crispy crust, tender chicken and vegetables, succulent sauce that was mopped up with a few scraps of dough baked into crackers. With almost three sticks of butter behind me, and a great dinner ahead, I started to understand how Epstein built a story into the very making of this dish. As a cook, he’s a bit like an ideal editor: he knows exactly what you need to do to make your project come out right, but he never comes right out and says it, instead leading you to a logical conclusion and letting you take ownership of the end result. And he gave me a great story to tell, about the time I made a fantastic dinner with a few key instructions missing . . . 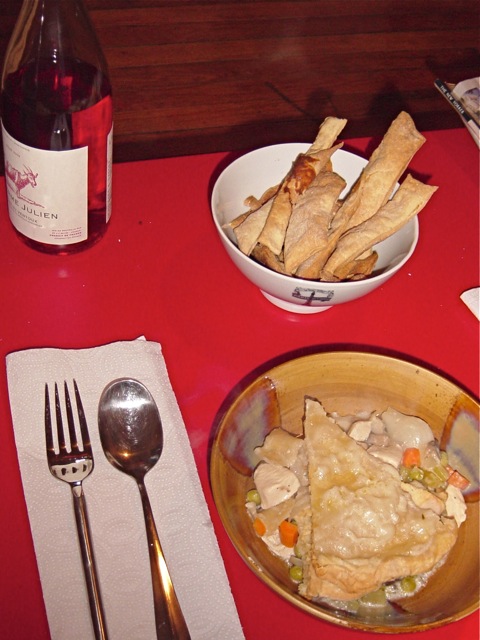