A Winner of the Nobel Prize in Literature Finally Translated 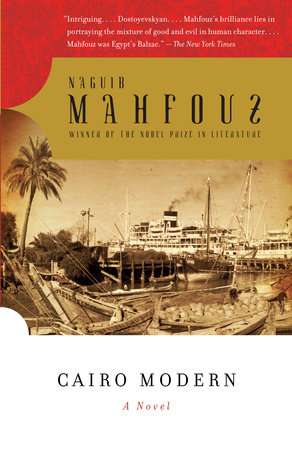 Naguib Mahfouz, In 1988, was awarded the Nobel Prize in Literature, the first writer in Arabic to do so. Now, newly translated, Cairo Modern, one of Naguib Mahfouz’s most daring novels brings us a tale of a doomed ménage a trois.

Cairo of the 1930s is a place of vast social and economic inequities. It is also a time of change, when the universities have just opened to women and heady new philosophies imported from Europe are stirring up debates among the young. Mahgub is a fiercely proud student who is determined to keep both his poverty and his lack of principles secret from his idealistic friends. When he finds that there are no jobs for those without connections, out of desperation he agrees to participate in an elaborate deception. But what begins as a mere strategy for survival soon becomes much more for both Mahgub and his partner in crime, an equally desperate young woman named Ihsan. As they make their way through Cairo’s lavish high society their precarious charade begins to unravel and the terrible price of Mahgub’s Faustian bargain becomes clear.

Naguib Mahfouz was born in Cairo in 1911 and began writing when he was seventeen. A student of philosophy and an avid reader, his works range from reimaginings of ancient myths to subtle commentaries on contemporary Egyptian politics and culture. Over a career that lasted more than five decades, he wrote 33 novels, 13 short story anthologies, numerous plays, and 30 screenplays.

To read an excerpt of Cairo Modern, click here.