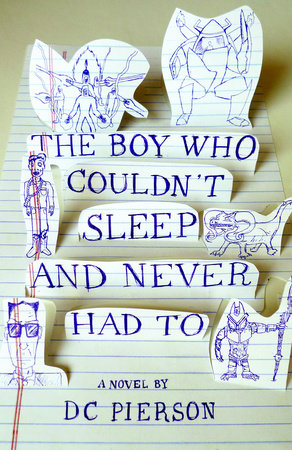 Thank you all who participated in the past sweepstakes for the advance readers’ edition of DC Pierson’s new novel, The Boy Who Couldn’t Sleep and Never Had To.

In preparation for the book’s launch on the 26th of this month, we recently had the opportunity to talk to DC Pierson.

Q: Before you wrote The Boy Who Couldn’t Sleep and Never Had To (BWCS) you were an active blogger, comic and short story writer. Why did you decide to write a novel?

A: I had just graduated from college. I was living in Astoria, Queens, and I boarded the N train one day. My friend and fellow comedian Eliza Skinner turned out to also be on the train. In the course of conversation, she mentioned that she liked my writing, and she asked if I’d ever thought about writing a novel. I told her I had, and it was something that I’d definitely like to try my hand at one day. Eliza said something along the lines of, “A lot of people say that, and a lot of them never do it.” This was precisely the right thing to say to trigger my competitive spirit.

That day, at my temp job, I somehow got around the firewall that was supposed to prevent staffers from sending personal e-mails, and sent Eliza an e-mail telling her that she had really gotten under my skin with her “a lot of people say that” remark, and that I would write a novel if she would be my “novel sponsor” by bothering me constantly and guilt-tripping me until I actually had a finished product. She agreed. I respond best to guilt and haranguing, so this arrangement ended up working out really well.

That night, I called my temp agency and told them I could not go back to that job the next day. I called when I knew my temping rep would have already gone home for the day, because I am a coward. Then I took a nap.

To learn more about The Boy Who Couldn’t Sleep and Never Had To, click here.