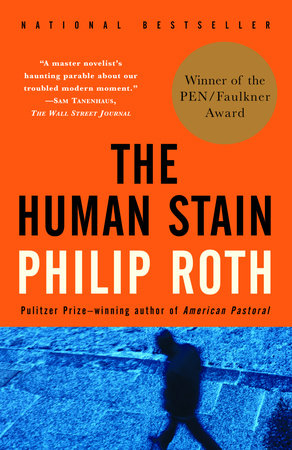 “In American literature today, there’s Philip Roth, and then there’s everybody else.” —Chicago Tribune

About this guide
The introduction, discussion questions, author biography, and suggested reading list that follow are designed to enhance your group’s reading of Philip Roth’s The Human Stain. We hope they will provide you with fruitful ways of thinking and talking about a novel that has been called “one of the most provocative explorations of race and rage in American literature.”*

Set in the summer of 1998, with Bill Clinton’s impeachment hovering in the background, The Human Stain chronicles the disgrace and downfall of Coleman Silk, an eminent classics professor at New England’s small Athena College. When Silk asks about two absent students, “Do they exist or are they spooks?” a specious charge of racism is brought against him, and in the bitter fight that follows, his life begins to unravel. After his wife’s death, which he attributes to the harassment they have suffered, Silk resigns, severs all ties with the college, and begins an affair with a thirty-four-year-old janitor, Faunia Farley. This, too, is exposed and turned into a public scandal by Delphine Roux, the ambitious Yale-educated literary theorist who led the attack against Professor Silk over his alleged racism. But Silk has another secret, a secret he has kept from his colleagues and friends, even from his wife and children, for fifty years, a secret more shocking than anything his enemies could have imagined about him. It is the stunning revelation of Silk’s real identity and his hidden history, that the narrator, Nathan Zuckerman, pursues in The Human Stain. In so doing, he uncovers a life that is both uniquely fascinating and yet deeply representative of an essential American impulse.

The concluding volume in Philip Roth’s acclaimed American trilogy, The Human Stain explores the ambiguous boundaries between truth and falsehood, past and present, perception and reality, and offers a moving meditation on the limits of what we can really know about each other.

Also in the American trilogy:
American Pastoral
I Married a Communist

For discussion
1. Why does Roth begin the novel by establishing the parallel story of the public scandal over Bill Clinton’s affair with Monica Lewinsky—a scandal that “revived America’s oldest communal passion, historically perhaps its most treacherous and subversive pleasure: the ecstasy of sanctimony” [p. 2]? How are Clinton’s and Silk’s stories similar? In what ways does this context extend the novel’s scope beyond one man’s experience to a larger critique of late twentieth-century American culture?

2. Coleman Silk’s downfall is caused, ostensibly, by the spurious charge of racism that results from his question about two absent black students. But as we learn more of Silk’s past—a past of which his colleagues at Athena have no knowledge—his disgrace takes on different meanings. What ironies are involved in Silk being charged with racism when he himself is black? By denying his own racial identity has he turned it into a kind of ghost? Is Coleman in any way responsible for his own destruction?

3. Delphine Roux appears to act on behalf of the aggrieved students, but what other motives does she have for orchestrating the attack on Coleman Silk? Is she aware of her motivation? What discrepancies are revealed between her public position and her emotional struggles?

4. Why do Silk’s colleagues fail to defend him? Why would highly educated academics—people trained to weigh evidence carefully and to be aware of the complex subtleties of any object of study—so readily believe the absurd stories concocted to disgrace Coleman Silk? Why does Ernestine describe Athena College as “a hotbed of ignorance” [p. 328]?

5. Coleman and Faunia are an unlikely couple—a seventy-one-year-old classics professor and a thirty-four-year-old janitor. What draws them together? What do they offer each other? How is their relationship—the relationship about which “everyone knows”[as Delphine Roux claims in her anonymous letter]—different from what others imagine it to be? Why is Coleman able to reveal his secret to her?

6. Throughout the novel, characters are portrayed as caricatures through a set of preexisting and clichéd stories—Coleman is the racist professor and lecherous old man who takes advantage of a woman half his age; Faunia Farley is the naíve and helpless victim; Les Farley is the crazed, abusive husband. How does the real story of each of these characters defy or complicate these simplifications?

7. In what ways are each of the major characters in the novel—Coleman, Faunia, and Les—controlled by the past?

8. After the funeral, when Ernestine reveals that Coleman was black, Nathan reflects, “I couldn’t imagine anything that could have made Coleman more of a mystery to me than this unmasking. Now that I knew everything, it was as though I knew nothing” [p. 333]. What is Roth saying about the limits of our ability really to know one another? At what other points in the novel does this problem arise?

9. Late in the novel, Nathan discovers that Faunia had kept a diary and that “the illiteracy had been an act, something she decided her situation demanded” [p. 297]. Why did Faunia feign illiteracy? Was there any reason why she chose this flaw in lieu of others? What are the implications of her secret?

10. In the overheard conversation that begins Chapter 3, one of the characters complains of his students, “They fix on the conventionalized narrative, with its beginning, middle, and end—every experience, no matter how ambiguous, no matter how knotty or mysterious, must lend itself to this normalizing, conventionalizing, anchorman cliché. Any kid who says ‘closure’ I flunk. They want closure, there’s their closure” [p. 147]. In what ways does The Human Stain resist this “conventionalizing” need for closure? How does it alter the classical unities of beginning, middle, and end?

11. The Vietnam vet Les Farley is a menacing, violently angry character, whose stream-of-consciousness rants reflect some of the most powerful writing in the book. What kind of mental and emotional damage has the war done to him? How has it changed who he is? What are the implications of Les’s being the instrument of Coleman’s destruction?

12. After an argument with Coleman, Faunia drives to the Audubon Society to visit Prince, a crow who was raised by people and achieved notoriety for acting like a “big shot” and stealing girls’ barrettes. When Faunia learns that Prince has ripped down the newspaper clippings about him, she says, “He didn’t want anybody to know his background! Ashamed of his own background! Prince! . . . Oh, you good boy. You’re a good crow” [p. 240]. And when she’s told that Prince can’t live among other crows, she says, “That’s what comes of hanging around all his life with people like us. The Human Stain” [p. 242]. In what ways can this episode be read as a parable of Coleman Silk’s own experience? How does this passage help to explain the novel’s title?

13. Nathan interprets Coleman’s choosing to reject his past and create a new identity for himself as “the drama that underlies America’s story, the high drama that is upping and leaving—and the energy and cruelty that rapturous drive demands,” whereas Walter thinks of his brother as a “calculating liar,” a “heartless son,” and a “traitor to his race” [p. 342]. Which of these views seems closer to the truth? Are they both legitimate? What is Ernestine’s position?

14. Coleman Silk is a professor of ancient Greek and Roman literature, and the novel abounds in classical references. The college is named Athena, Coleman thinks Viagra should be called Zeus, the author of the anonymous e-mail message that slanders Coleman calls herself Clytemnestra, the three young professors whom Coleman overhears commenting on the Clinton/Lewinsky scandal are referred to as a chorus, and so on. What do these allusions add to the novel? How are elements of Greek tragedy such as hubris, the hero’s fall, retribution, and ritual cleansing relevant to the action of the novel?

15. The Human Stain ends with Zuckerman finding Les Farley ice fishing in the middle of a secluded lake. Les says, “And now you know my secret spot. . . . You know everything. . . . But you won’t tell nobody, will you? It’s nice to have a secret spot. You don’t tell anybody about ’em. You learn not to say anything” [p. 361]. In what sense is the entire novel about revealing and concealing secrets?

16. The Human Stain is a novel of sweeping ambition that tells the stories not just of individual lives but of the moral ethos of America at the end of the twentieth century. How would that ethos be described? What does the novel reveal about the complexity of issues such as race, sex, identity, and privacy?