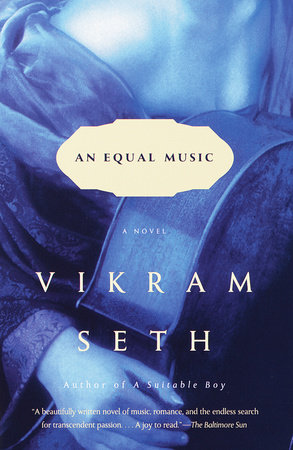 About this guide
The questions, discussion topics, and author biography that follow are intended to enhance your group’s reading of Vikram Seth’s An Equal Music.

While a music student in Vienna, violinist Michael Holme falls in love with pianist Julia McNicholl. They play together in a string trio, but when Michael has a nervous breakdown because of tensions with his stern and demanding violin teacher he abruptly leaves Vienna—and Julia—without warning. When, after some months pass, he tries to contact Julia again, he gets no reply. Ten years later, still in love with her, he meets her again in London when she attends a concert he is giving with his string quartet, the Maggiore. Still a performing pianist, she is now married to an American banker, has a child, and because of an auto-immune disease, is gradually going deaf. Unable to resist the power of their past, they begin to see each other again, this time under the shadow of Julia’s marriage and her tragic hearing loss. Julia agrees to tour Vienna and Venice with Michael and the Maggiore Quartet and for a brief, magical time everything seems possible.

A tour de force of poetic, impassioned writing, An Equal Music is an unforgettable tale of love lost and nearly regained, its events unfolding in the dramatic settings of contemporary London, Vienna, and Venice. Brilliantly interweaving themes of loss, longing, and the power of music, Vikram Seth has created a deeply moving story about the strands of passion that run through all our lives.

For discussion
1. The epigraph Seth has chosen—also the source of the book’s title—is taken from one of John Donne’s sermons and is a description of life after death. How does it relate to the story as a whole? How does it relate particularly to the love between Michael and Julia?

2. At the beginning of the novel, Michael says of his time in Vienna, “What I lost there I have never come near to retrieving” [p. 5]. What does the rest of his story tell us about the desire, or belief, that the past can be reclaimed or lived again, with different choices made, mistakes corrected, happiness attained? Is it possible to remap the path of one’s life?

3. Beethoven’s String Trio in C Minor, op. 1, no. 3, a piece that Michael had performed with Julia and Maria in Vienna, plays an important role in the novel. When Michael discovers that the piece exists in a version for quintet, he wants to play it with the Maggiore, and it’s important to him that he play the part of the first violin [p. 54]. Why? What is he hoping to experience? When the group plays the piece for the first time [pp. 78-80], does it matter that he must play second violin instead?

4. How does the novel make you aware of the particular difficulties and rewards of playing chamber music? What do you find most effective about the ways that Seth describes the life of a professional musician? Michael refers to his string quartet as “an odd quadripartite marriage with six relationships, any of which, at any given time, could be cordial or neutral or strained” [p. 14]. Would you say that, despite the fact that Carl Käll assumed that he’d want a solo career, being an ensemble player is better suited to Michael’s temperament? Why?

5. Vikram Seth has quoted someone as saying, “Writing about music is like dancing about architecture,” [Christian Science Monitor, 10 June 1999, p. 16]. How does Seth manage to communicate through language the experience of music? Try listening to any of the pieces of music that plays a part in the story—Ralph Vaughan Williams’ “The Lark Ascending” [see page 70], or the Beethoven trio mentioned above, for instance. How does the act of listening to the music change or deepen your experience of the novel?

6. How relevant to the story is the fact that Michael comes from a working class background? Why is he so bitter about what has become of Rochdale, his home town? What do the Rochdale scenes, and particularly his relationship with Mrs. Formby, tell us about Michael’s character?

7. Julia is the daughter of an Oxford professor of history and, unlike Michael, she grew up surrounded by music, literature, and art. Michael says, “she had in many ways been the making of me” [p. 82]. What does he mean by this, and to what degree would you consider this the reason for his undying love for her?

8. At their second meeting, Julia tells Michael she is married. When he asks why she doesn’t wear a wedding ring, she answers, “I don’t know. It distracts me. It distracts me when I play the piano. I look at it and I can’t concentrate on the music” [p. 107]. How do you interpret this remark?

9. Just before Michael and Julia go to bed together for the first time in ten years, she says, “Making music and making love—it’s a bit too easy an equation” [p. 136]. What does she mean by this? What is different about the love between musicians who play music together? Why has Julia chosen a husband who is not a musician? Does music provide a channel for intimacy between musicians that isn’t available to other people?

10. Why doesn’t Julia tell Michael about her hearing loss when she first meets him? Later, she and Michael keep her problem a secret even when she is rehearsing with the Maggiore for the concert in Vienna. Is it wrong of her not to reveal her secret to the other members of the quartet, since she is going to be performing with them? Is Michael right to feel that he’s betrayed Julia in telling Piers about it? Are the other members of the quartet cruel in doubting Julia’s ability to pull it off, or are they justified in wanting to protect their careers and the reputation of the quartet?

11. Why does Julia invite Michael to lunch to meet her husband? Is Michael correct in assuming that she wants to punish him for revealing her secret?

12. Should Julia leave her husband to be with Michael? Are the loves she has for Michael and for her husband equally real, equally deep, equally compelling? Which should take precedence over the other? Does the fact that she has a child make a difference?

13. What is the reason for the breakdown Michael has during the interval of the performance in Vienna? Is his mind coming unhinged? How much sympathy do you have for him after Julia decides not to see him any more, and after he loses his violin to Mrs. Formby’s nephew? Why does his leave the quartet for a life which seems so much less fulfilling?

14. Near the end of the novel, Michael finds that Mrs. Formby has returned his violin to him in a codicil to her will. Is this resolution a happy ending of sorts? Is Michael’s relationship with his violin ultimately the most satisfying and intimate one left him? What is the significance of his music teacher’s bequest to him?

15. The novel ends with Julia’s solo performance of Bach’s “Art of Fugue.” In the audience, Michael thinks, “It is a beauty beyond imagining—clear, lovely, inexorable, phrase across phrase…it is an equal music” [p. 380]. After the concert, he reflects, “Music, such music, is a sufficient gift. Why ask for happiness; why hope not to grieve? It is enough, it is to be blessed enough, to live from day to day and to hear such music—not too much, or the soul could not sustain it—from time to time” [p. 381]. How do you respond to this final reflection upon the novel’s conflicts, and upon the difficulties and rewards of life?

16. If An Equal Music is a story of unending love, it is also a story of wrenching loss. What do you find most painful about the novel? If you have read other novels in which the lovers find it impossible to be together—Michael Ondaatje’s The English Patient or Graham Greene’s The End of the Affair, for instance—would you say that there is something ultimately satisfying in reading about such intense emotion, even if the story ends tragically?

About Vikram Seth
Read an author bio and view a complete list of titles by Vikram Seth available from Random House here.