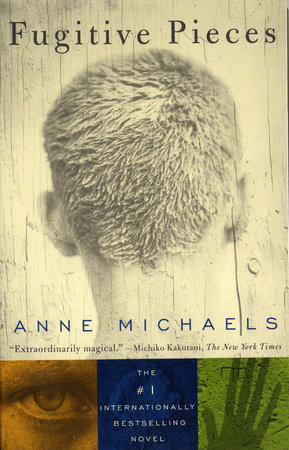 About this guide
The questions, discussion topics, and reading list that follow are intended to enhance your group’s reading of Anne Michaels’s Fugitive Pieces. We hope they will aid your understanding of the many rich themes that make up this radiant and lyrical first novel by one of Canada’s foremost poets.

In Poland during World War II, seven-year-old Jakob Beer’s parents are murdered by Nazi soldiers and his adored elder sister, Bella, is abducted. The mourning child flees and is miraculously rescued by Athos Roussos, a Greek geologist. Athos smuggles Jakob to his native island of Zakynthos, where he successfully hides him from the Nazi authorities and introduces him to a new world of geology, poetry, botany, and art. After the war the two move to Toronto, and Jakob embarks on marriage and a career as a poet. Through the experience of profound love, Jakob eventually transcends the tragedies of his youth; but his spirit remains forever linked with that of his lost sister. As Jakob gets older, his life and work provide inspiration and, eventually, spiritual regeneration, for Ben, a younger man whose own family has been blighted by the Holocaust.

Fugitive Pieces is an incandescent novel, heartbreaking and finally joyful. Its vivid images, its poetry and its wisdom will prove unforgettable.

For discussion
1. Why is the first section of the novel entitled “The Drowned City?” Why is the title repeated for a later section?

4. The communist partisans in Greece, who had valiantly resisted the occupying Nazis, themselves committed terrible atrocities after the war, as Kostas and Daphne relate. Do you agree with their theory that violence is like an illness that can be caught, and that the Greeks caught it from the Germans [72]? What other explanations can be offered?

6. “We were a vine and a fence. But who was the vine? We would both have answered differently” [108]. Here Jakob is speaking of his relationship with Athos; of what other relationships in the novel might this metaphor be used? Does Michaels imply that dependence is an integral part of love?

7. What is it about Alex’s character that attracts Jakob and makes him fall in love with her? Why does he eventually find life with her impossible? Do you find Alex a sympathetic character, or an unpleasant one?

8. “History is amoral: events occurred. But memory is moral” [138]. “Every moment is two moments” [161]. How does Jakob define and differentiate history and memory? Can you see Fugitive Pieces as a comparison of history and memory?

9. Music is an important element of Fugitive Pieces, and it is central to the lives of at least three of the characters, Bella, Alex, and Naomi. What does music mean to each of these characters? Why has Michaels given music such a prominent metaphoric role in the novel?

10. What does Fugitive Pieces say about the condition of being an immigrant? Jakob never feels truly at home anywhere, even in Greece. Ben’s parents feel that their toehold in their new home is infinitely precarious, an emotion that communicates itself to Ben. Does Michaels imply that real integration is impossible?

11. Can you explain the very different reactions Ben’s parents have had to their experience in the Holocaust? What in their characters has determined the differing ways they respond to grief and loss?

12. The relationship between Ben and Naomi is a troubled one. Why is he angry at her for her closeness to his parents and her attention to their graves? Why does he reject her by leaving for Greece without her? How can you explain his intense desire for Petra—is his need purely physical? How do Petra and Naomi differ? What is the significance of their names?

13. Science has as important a role in the novel as poetry and music. Why is geology so important to Athos, meteorology to Ben? Does science represent a standard of disinterested truth, or does it merely symbolize the world’s terrifying contingency?

14. Why might Jakob have named his collection of poems Groundwork, and in what way does that title relate to his life? Jakob calls his young self a “bog-boy” [5]. Why does Ben take such an interest in the preserved bog people he reads about [221]?

15. The last line of the novel is Ben’s: “I see that I must give what I most need.” What does he mean by this? What does he most need, what will he give, and to whom?

16. What is the significance of the novel’s title? What do “pieces,” or “fragments,” mean within Michaels’s scheme? Where in the novel can you find references to fragments?

About Anne Michaels
Read an author bio and view a complete list of titles by Anne Michaels available from Random House here.