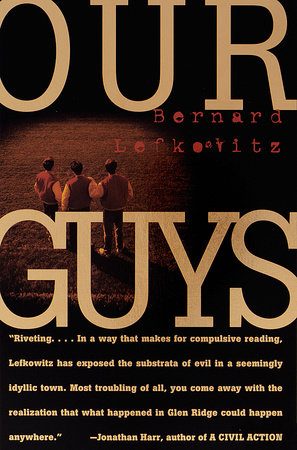 About this guide
The questions, discussion topics, and suggested reading list that follow are intended to enhance your group’s experience of reading Bernard Lefkowitz’s Our Guys. We hope they will provide you with a number of interesting angles from which to approach this harrowing and deeply revealing story of the violent undercurrents that exist within a “perfect” American suburb.

Glen Ridge, New Jersey: In March 1989, thirteen teenage boys lured a retarded girl into a basement where four of them gang-raped her while several others looked on. The boys were the most popular athletes in high school. And although rumors of the rape began quickly circulating through the town, it was weeks before anyone reported it to the police and years before the boys finally went to trial.

Glen Ridge is an affluent, idyllic suburb, the kind of town that exemplifies the
American Dream. What went wrong in Paradise? Why did the town’s supposedly responsible adults—including teachers, coaches, parents, and law-enforcement officers—turn a blind eye to the increasingly violent and aberrant behavior of Glen Ridge’s golden boys? In Our Guys, noted author and journalist Bernard Lefkowitz draws on hundreds of interviews with the case’s key players and observers to create a deeply disturbing portrait of an all-American town and the value system that shapes its children’s characters. The expertly told story of the rape and the subsequent trial makes a compelling national drama of conscience and morality, charged with a significance that reaches far beyond one town and its criminal justice system. A New York Times Notable Book of the Year, a Publishers Weekly Best Book of the Year, a Los Angeles Times Book Prize Finalist, and an Edgar Award Finalist, Our Guys raises vital questions about our values, our law, and our moral standards.

For discussion
1. One review of Our Guys described the priorities of the community of Glen Ridge as “large, protected homes, easy access to an endless array of consumer goods, and team sports, with education far down the line, except as a means of obtaining the first three” (The New York Times Book Review). Is this a fair assessment?

2. How do the jocks classify the girls in their high school class, and what, if anything, do these classifications tell us about the roles of girls and women in this community? Why do the girls put up with the treatment the jocks hand out, even agreeing to call themselves “pigs” to gain admission to jock parties [p. 203]?

3. “The ruling clique of teenagers adhered to a code of behavior that mimicked, distorted and exaggerated the values of the adult world around them” [p. 493]. Does this square with what you have read about the parents of the perpetrators? Does it conform with what you read about the teachers, coaches, and others whose job it is to deal with the youth of Glen Ridge? How does this compare with what is going on in your own community?

4. Lefkowitz believes that the social hierarchy and the social conditioning in Glen Ridge reflects the larger American culture. Do you agree with him? How do the society and the values of Glen Ridge resemble, or differ from, other communities and schools with which you are familiar? Do you agree with Lefkowitz’s implication that ours is an essentially unequal culture, where males get more breaks than women do?

5. “Of all the boys charged with sexually assaulting Leslie Faber, only Bryant Grober had sisters. The others grew up in families where males were the dominant personalities” [p. 68]. Also, Lefkowitz notes, there were no women in high positions in Glen Ridge High School. What effect might the lack of association between boys and girls have had upon these boys? Do you believe that it is the school’s responsibility to ensure that more women have important, responsible, and visible positions within its hierarchy?

6. “Achievement was honored and respected almost to the point of pathology,” said the minister of Glen Ridge Congregational Church, “whether it was the achievements of high school athletes or the achievements of corporate world conquerors” [p. 130]. “Compassion for the weak,” adds Lefkowitz, “wasn’t part of the curriculum.” Are these traits—the worship of success and a lack of concern for the weak—characteristic of our culture as a whole? Are our major institutions, like the educational system and the press, making any attempt to counterbalance such ideas?

7. In Chapter 16, why did the kids get away with trashing Mary Ryan’s house? Why was no legal action taken by the Ryans? Do you think that this sort of incident occurs, and gets covered up, in other towns or cities? What would have happened to these boys if they had been less affluent—or if they had not been white?

8. According to a national survey in 1993, 81 percent of female public school students said they had been sexually harassed in school; only 7 percent of those harassed told a teacher about it [p. 92]. Why do you think so few girls inform their teachers? Are they afraid of retaliation or of publicity? Do you believe that such fears are justified? What effect might the experiences of Leslie Faber or that of the Central Park jogger (whose story was in the news for months) at the hands of lawyers and media have on a woman who is wondering whether to report a rape?

9. “The guys prized their intimacy with each other far above what could be achieved with a girl” [p. 146]. What does sex represent for the boys in this jock culture? Why is it a passive experience—something “done to them, not something they actively participated in” [p. 148]? Do you think that Querques’s tactics in painting Leslie as a sluttish Lolita were legitimate—that he was simply doing the best he could to acquit his clients? Or do you find his behavior despicable? Why is it legally acceptable to make the sexual history of the victim public but not to reveal that of the suspect? How might the legal system try rape suspects without putting the victim on trial too?

10. In what ways do you feel that Glen Ridge High School failed its students—both the jocks, who were growing increasingly delinquent, and their victims? How did it fail the other students: the “Giggers,” for example, and those who were, or might have been, genuinely interested in their academic subjects? Do you see the schools in your community behaving similarly?

11. Do you agree with the final decision of the jury? That is, “was what the boys did a crime—or was it just a crummy thing to do” [p. 35]? What is your reaction to the judge’s sentencing of the boys? What messages did the verdict and the sentencing convey to the boys, the town of Glen Ridge, and to those who took an interest in this case?

12. Are all young males aggressive, potentially dangerous, when they are part of a group? Are athletes, by nature or training, violent and dangerous?

13. Bernard Lefkowitz has said, “I think that when we try to respond to men who commit crimes when they’re in their twenties and thirties, we’re way too late. Their values have been shaped when they were twelve,thirteen, and fourteen years old” (Salon magazine, August 1997). If this is the case, what might we do as a society to change the values these boys are acquiring? How might such change be effected?

14. One of the questions posed by this book is: “Is it worth ruining so many lives to punish guys who got carried away for an hour?” [p. 284]. What is your own answer? If it is “no,” do you believe that such leniency should apply in all similar cases?

15. Lefkowitz implies that there are two justice systems in America: one for the affluent, and one for everyone else. Does this seem a fair assessment of the situation? What other prominent legal cases in recent years might illustrate your point?

About Bernard Lefkowitz
Read an author bio and view a complete list of titles by Rohinton Mistry available from Random House here.