Henning Mankell's The Man From Beijing

There’s never been a better time to be in the business of Scandinavian crime. Laura Miller noted the formula for the genre’s success in the Wall Street Journal: “Take that wintery landscape and add a dead body, then take that mopey main character and make him a sleuth trying to figure out who’s responsible for the corpse. Double check to make sure we’re not far from the Arctic Circle, and suddenly you have the recipe for an international best seller.” Julia Keller of the Chicago Tribune also noted that this literature takes us to “a world of bleak twilights and tortured souls. A world of cold dawns and dour sleuths. A world of frozen lakes and repressed detectives. . . . A world of winters and losers.” (How I wish I had written that sentence.) If you’re a late comer to the genre, you’d think that the craze began with Stieg Larsson and his Millennium trilogy (and like you, I’m hankering after that final volume of Lisbeth Salander’s saga, The Girl Who Kicked the Hornet’s Nest). However, Larsson wouldn’t even be a blip on the American radar without the groundbreaking international success of  Henning Mankell. His Kurt Wallander series broke the mold of detective fiction with a protagonist as disheveled as he is brilliant. His newest book, The Man from Beijing, promises to revolutionize the genre again with a mystery that spreads across four contents and takes centuries to unfold.

WHO IS HENNING MANKELL?

Henning Mankell has completely dominated the genre of Scandinavian crime literature. He started writing fiction and nonfiction in his late 20s, but it wasn’t until his 40s, when his first novel starring Kurt Wallander, Faceless Killers, was published in 1991, that his fame spread across Sweden and then all of Europe. Mankell now travels the world and divides his time between Sweden and Mozambique (where he collaborates with the theater Teatro Avenida in Maputo). He says, “I stand with one foot in the snow and one foot in the sand.”

Mankell always wanted to be a writer, and now says “The only dream I had in my life is what I am doing now,” yet his early career was more steeped in criminal justice than great literature. His father was a judge in the small Swedish town of Sveg, and growing up in an apartment above the courthouse, it was almost inevitable that Mankell would be interested in the justice system and how it works. (Once his toy cars were used to demonstrate how a traffic accident occurred.) His novels are steeped in blood and mayhem, but also in the idea that an institution—a court system, a worldwide conglomerate, etc.—may be as dangerous as a knife-wielding criminal.

However, Mankell’s novels represent much more than just a chilly Nordic attitude. He creates unusually rich global portraits, in which mysteries extend far beyond their immediate reach. His early plays and novels have an international scope and are almost always about social injustice and the solidarity between nations necessary for obtaining peace. Mankell said, “I am like an artist who must stand close to the canvas to paint, but then take a step back to see what I have painted. Africa has provided my life with that movement. Some things you can only see at a distance.”

And what does the future hold for Mankell? More novels, he says, at least “until death interrupts. . . . But ars longa vita brevis — art is long but life is short. There will always be more stories than time.”

WHO IS KURT WALLANDER?

After many years living full-time in Africa, Mankell returned to Sweden in May 1989, wrote Faceless Killers, the book that introduced Kurt Wallander to the world. “I had been away from Sweden for some time,” he said, “and when I returned I became aware that racism was exploding and I decided to write about that. To me racism is a crime, and I thought: Ok, I’ll use the crime story. Then I realized I needed a police officer, and I picked the name Wallander out of the telephone directory.”

In Faceless Killers, an elderly couple is murdered on an isolated farm after being brutally tortured. The woman’s final word—“foreign”—unleashes a racist and xenophobic frenzy in the small town of Ystad, which August Strindberg described as “a nest of pirates and fraudsters.” The policeman Kurt Wallander (currently personified to great acclaim by Kenneth Branagh in a BBC adaptation, above) arrives to take the case, and he is not much more attractive than the town’s denizens—as his TV personifier has gone to great lengths to emulate, he has an unshaven face, red-rimmed eyes, and dirty laundry. He drinks too much, eats too much fast food, is usually recovering from a hangover. Yes, his brilliance is unwavering, but frankly he’s also a mess, prompting many readers to scream out “Get it together, man, and take a shower while you’re at it!” This is no cool Sam Spade, no purely professional George Smiley; Wallander is much more like his readers than most literary detectives. He’s flawed, with foot-in-mouth moments and sometimes following the wrong hunches, yet he, like us, can’t resist his own curiosity. Wallander has fans all over the world, and you can even tour Sweden in Wallander’s footsteps. He has all the traits of a classic curmudgeonly gumshoe, and Mankell’s series brilliant chronicles how the cases he’s solved have shaped his dark perspective on the world. But be sure that Mankell and Wallander are not the same person; Mankell notes, “Wallander and I have only three things in common: our age, our belief that no one is born evil, and our love of opera. If he were a real person, I don’t think that we would be friends. I don’t really like him, and that’s the way I like to keep it.”

Why You Will Love THE MAN FROM BEIJING: 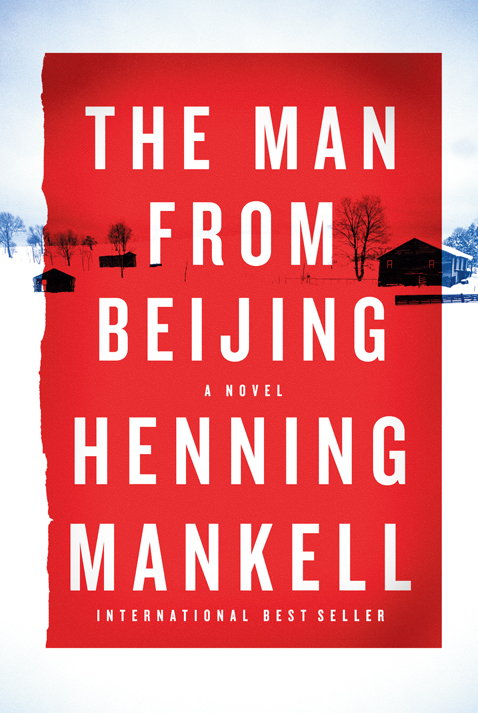 In a recent interview with the Irish Times, Mankell said, “my books all have in common my search for understanding of the terrible world we are living in and ways to change it.” Reading The Man from Beijing makes this abundantly clear—though Mankell begins with a vicious crime, the roots of this crime are in the injustices perpetuated hundreds of years earlier, through the systematic oppression of the powerless by the powerful. The scope of this novel is extraordinary—this is a mystery where the motive reaches far back into the past, its tendrils extending into wrongs perpetrated centuries before the crime scene we must explain in the present day. On top of all of this,
Mankell writes the best, goriest, most surprising and off-putting crime scenes I’ve ever read. He puts the blood where you haven’t seen it, and when the brutality emerges before you, you feel both the savagery of the crime and the immediate intrigue that comes with guessing at its perpetrator. (In the final Larsson book, careful readers will note a neat little homage to Faceless Killers in the form of a peculiar knot in a hangman’s rope. Clearly Larsson owes something major to Mankell’s great work, especially in crafting Mikael Blomkvist’s initial fall from grace.)

The novel opens in January 2006 in the Swedish hamlet of Hesjövallen. A wolf emerges from the woods, smelling blood in the air, and finds a carcass to drag home before the village dogs can get to it:

“The wolf starts eating when he comes to the edge of the trees. It is easy, as the flesh has not yet frozen. He is very hungry now. Having pulled off a leather shoe, he starts gnawing away at an ankle.

It snowed during the night but stopped before dawn. As the wolf eats his fill, snowflakes once again start dancing down toward the frozen ground.” (p. 4)

Nineteen people have been massacred; “it was as if a blood-laden hurricane had stormed through the village just as the old people who lived there were getting up” (p. 13). And in the middle of this horrifying scene, the only clue is a red ribbon.

Judge Birgitta Roslin has particular reason to be shocked: she is the first person to link the murders to a much larger plot when she sees her mother’s adoptive parents, the Andréns, are among the dead. As a reader, you’ll get behind Roslin when you realize she’s as magnetic and compelling as Wallander. Smart, tough, but compassionate from head-to-toe, Roslin’s keen intellect and her passion to clear away the lies and conspiracies drive the novel forward. She discovers the nineteenth-century diary of an Andrén ancestor—a gang master on the American transcontinental railway—that describes brutal treatment of Chinese slave workers. Roslin follows the diary’s path to Beijing, then to Zimbabwe and Mozambique, all the while excavating the motives behind the horrific murders in Hesjövallen.

The novels of Henning Mankell, from his earliest efforts to the Wallander chronicles, have provided readers with one hell of an addictive, spellbinding ride, and The Man from Beijing proves to be no different. In just two short weeks, this thrilling new novel is up for grabs, so be sure to get your hands on a copy!