Art and Intrigue in Paris: Sara Houghteling's Pictures at an Exhibition 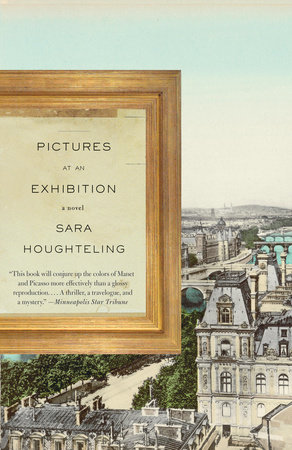 In her sweeping debut novel, Pictures at an Exhibition, Sara Houghteling tells the story of one son’s quest to recover his family’s lost masterpieces, looted from Paris under Nazi occupation. This period of history held particular fascination for the author, and in the following interview she discusses the genesis of the novel and its characters and how her love of art influenced the story.

Q: Pictures at an Exhibition tells a story that centers on the looting of European art in Paris during World War II. What drew you to this time and place, and where did the idea for this novel come from?
A:
My father’s family lived in Paris after the war. My grandfather was officially working for the Marshall Plan, but was in fact a member of the OSS—the precursor to the CIA—gathering information about French bridges in preparation for the possible next war. My grandmother Fiora’s stories from this time made me feel as if I had been living on rue Scheffer in the 1940s. She told me about the Russian count who lived across the courtyard, about the rationing of butter and gasoline, and how she was recognizable as an American to Frenchmen on the street by her shiny hair: the French used the same soap to wash their hair as they did the floor and the dishes. Only Americans used shampoo, imported in their suitcases, alongside silk stockings, cigarettes, and coffee. My father’s memories are a child’s memories: pushing a toy boat in the Luxembourg Garden fountain; wearing short pants even in winter; sharing the tub with my grandmother’s friend’s children since the French family couldn’t afford to heat the water for their bath; being surprised that French children did not like peanut butter. I found this contrast between adult and childhood memories intriguing. I knew I wanted to write about France in this post-war period, and I knew I wanted to write about Edouard Manet’s paintings, which I find beautiful and unsettling. Whenever I was stuck in the novel, I would study a new painting and see where it took me.