It’s a great time to learn how to make bread: all across the country, people are discovering that it’s easy and satisfying to whip up a batch of your own (often superior to supermarket, and longer lasting) bread in just a few short hours, and save money while you’re doing it. What you come away with is not only a delicious, warm, crusty, golden loaf, but also a sense that you’ve mastered one of the most difficult and temperamental challenges in cooking: that of regularly baking and devouring your own bread.

Our very own Judith Jones has been extolling the virtues of bread baking on her blog, saying, “I have long believed that if you want children to be interested in cooking, start making yeast breads together. They feel something so magical as the dough changes from a sticky mess under their hands to a smooth and bouncy mass that holds together. . . . They also love the shaping and are always surprised at how when it comes out of the oven its shape has changed. It has a mind of its own.” It’s one of the most transformative, magical methods of cooking, letting the chemical interactions of yeast and water and flour percolating together until you have an entirely new invention. And so the Borzoi cooks just had to take it up for ourselves this past weekend, taking on James Beard’s classic recipe for Maryetta’s Oatmeal Bread.

First step is to make some oatmeal–yes, cooked oatmeal. I poured boiling water over the oatmeal (cooks very quickly), then added two cups of the flour and the yeast, stirring together. (Claire worked as shutterbug, snapping away as I got out the oatmeal…) 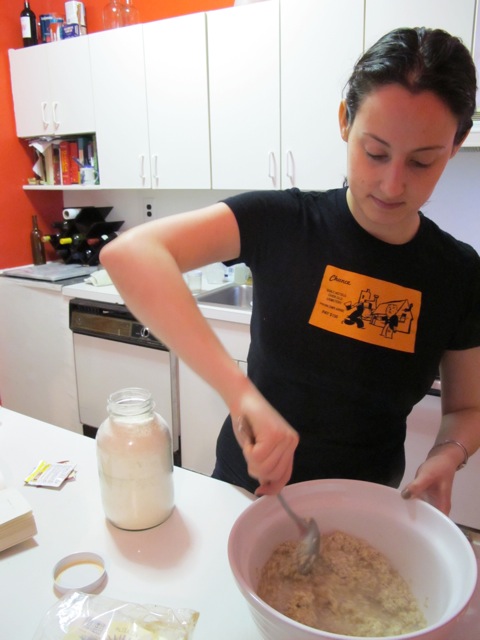 Put the dough in a “warm, draft-free spot and allow to rise, uncovered, until doubled in bulk.” Even though Beard recommended it rise uncovered, Florence saw that the apartment wasn’t quite “draft-free” and so we draped a damp cloth over the bread to keep it warm. (Best place to put the bread is near or on top of a warm radiator–though not too long, or it will over-rise. So I let it hang out in a warmer room for about an hour, plenty of time to double the dough…) 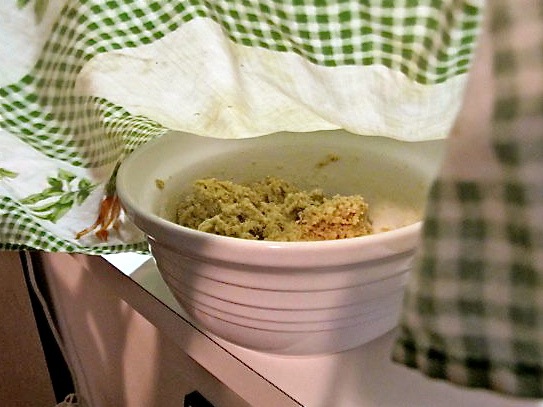 Once the dough has doubled, we punched it down and added salt, salad oil (either olive oil or vegetable oil can work, so we used up the last bit of olive oil in a bottle), molasses, and enough remaining flour to make a stiff dough. If you haven’t made much bread before, you’re looking for the texture of a good stiff lump of playdough, easy to manipulate with your fingers but not dried out. As you can see, it’s the molasses that takes it to an oozy, mud-like texture and color… 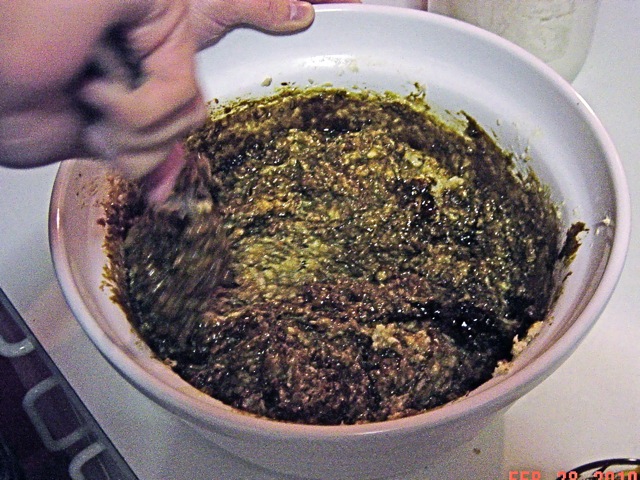 Florence started to mix the dough with a spoon, but after a while we couldn’t resist diving in with our hands. 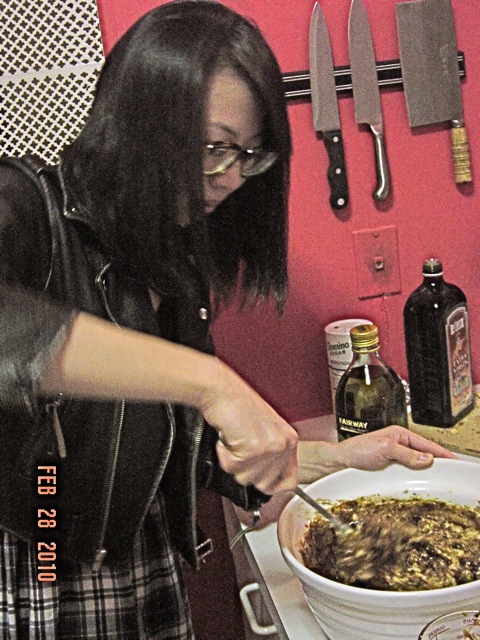 Yes, it ruined my brand-new manicure, but there’s really no better way to mix bread dough than with your hands…and we felt so tough doing it! 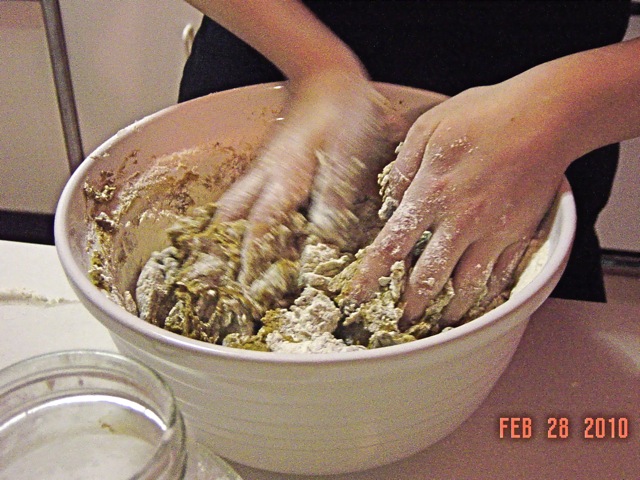 Once the dough has come to the texture we wanted, we turned it out onto a floured countertop and started kneading–this is a basic pushing and pulling of the dough, working remaining bits of flour in, moving the dough first away from you and towards you until it becomes nice and springy. (You’ll know you’ve needed enough when the dough springs back when you poke it–the dough will have become elastic, capturing all the gases generated by the yeast, and there’ll be plenty of gluten in the bread to give it a smooth, airy taste.) Beard says about 10 minutes kneading will be sufficient, but you cannot knead too much. 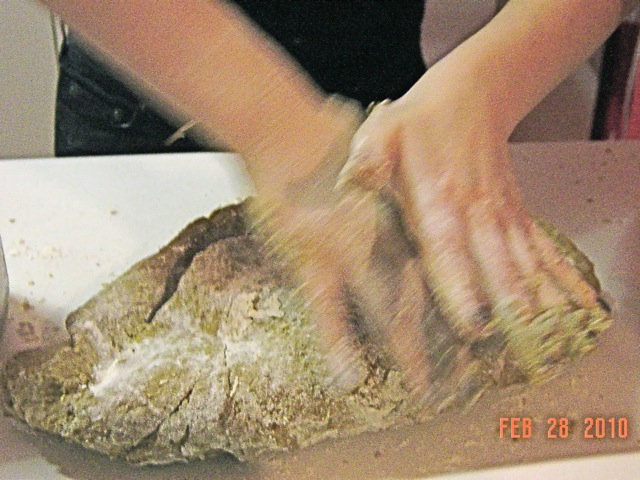 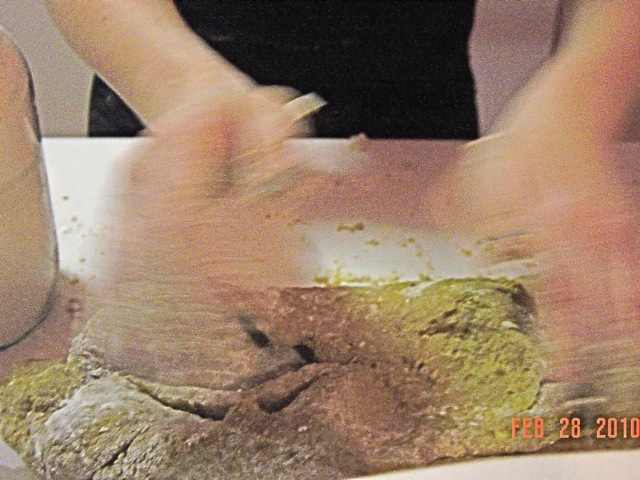 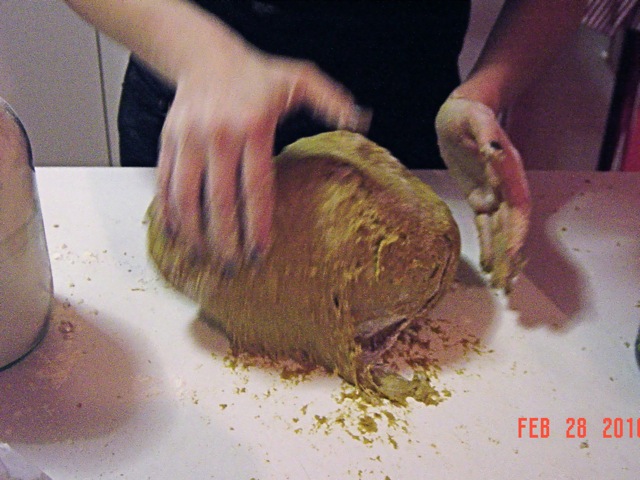 Once the dough came together, we divided it into loafs for three buttered pans (another great thing about making bread at home: you make a lot of it right away, big cost savings–you can always freeze the dough if you don’t want to eat it right away!) Allow the loaves to rise again until doubled in bulk. (Again, give it about an hour–bread-making’s easy to do when you’ve got a stack of unfinished novels calling your name…) 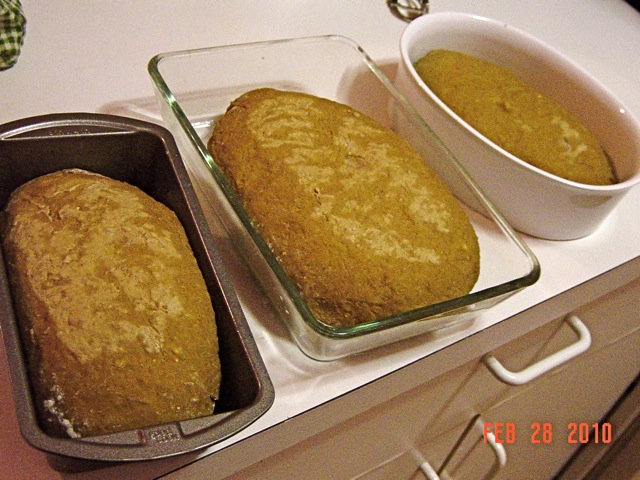 Once they’d doubled, we popped them in the oven an baked for about 40-60 minutes, or until the bread sounds hollow. (You can also use the famous toothpick test–if it comes out clean, your bread is done!) Let cool, then slice and serve… 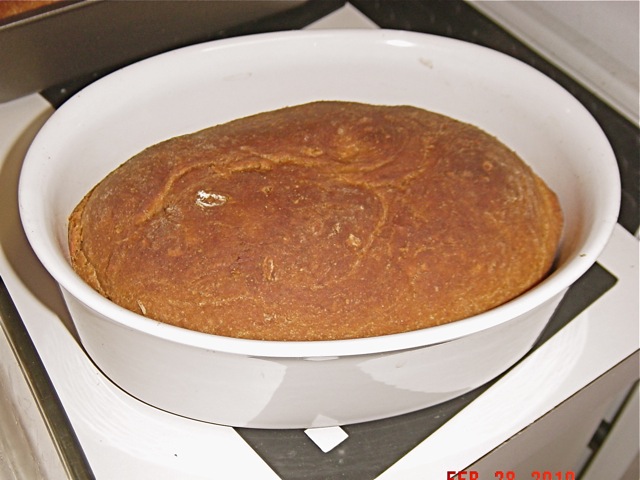 Florence said she could taste the molasses right away, making the bread very hearty, filling, and dense…a great snack Monday morning, when we brought two loaves into the office for snacking! The only problem we encountered was that it went stale very quickly–perhaps this is a result of having no chemical preservatives, those you might find it in a commercial brand. If you want to keep your bread fresh longer, try freezing it and slicing it up as need be, or keeping it in the refrigerator wrapped in an air-tight bag…anything to prolong how many tastes you might get of your culinary invention!

ADDENDUM: Some of our very smart readers have noted that there are, in fact, TWO oatmeal bread recipes back-to-back in Beard’s book. The one you see here is for Maryetta’s Oatmeal Bread, while the other one available is for Cooked Oatmeal Bread. Both are delicious, and we’ll have both recipes available for you soon!