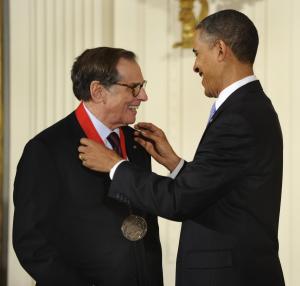 Robert A. Caro and Nobel laureate Elie Wiesel. The Washington Post reported that during the ceremony “the president gave his own big hug” to Wiesel and then singled out Caro by saying: “I think about Robert Caro and reading THE POWER BROKER back when I was 22 years old and just being mesmerized, and I’m sure it helped to shape how I think about politics.”

Books by Robert A. Caro
Books by Elie Wiesel