The Yankee Years Now In Paperback! 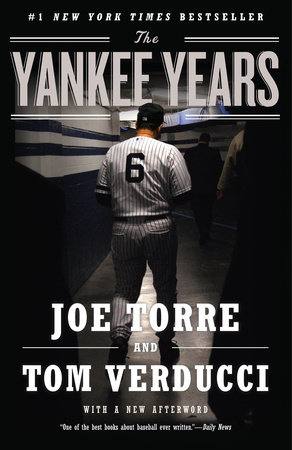 A #1 New York Times Bestseller finally comes to paperback. Written by Joe Torre and Tom Verducci, The Yankee Years brings us the definitive story of one of the greatest dynasties in baseball history.

Included in this new paperback edition is a new afterward!

When Joe Torre took over as manager of the Yankees in 1996, they had not won a World Series title in eighteen years. In that time seventeen others had tried to take the helm of America’s most famous baseball team. Each one was fired by George Steinbrenner. After twelve triumphant seasons—with twelve straight playoff appearances, six pennants, and four World Series titles—Torre left the Yankees as the most beloved manager in baseball. But dealing with players like Jason Giambi, A-Rod, Derek Jeter, Mariano Rivera, Roger Clemens, and Randy Johnson is what managing is all about. Here, for the first time, Joe Torre and Tom Verducci take readers inside the dugout, the clubhouse, and the front office, showing what it took to keep the Yankees on top of the baseball world.

“One of the best books about baseball ever written.” —Daily News