Ah, Passover. It’s like the Jewish Thanksgiving—storytelling, family gathered around, and lots of delicious and symbolic food. And for my Passover seder this year, there was only one cook book I needed to turn to: Joan Nathan’s Jewish Cooking in America. 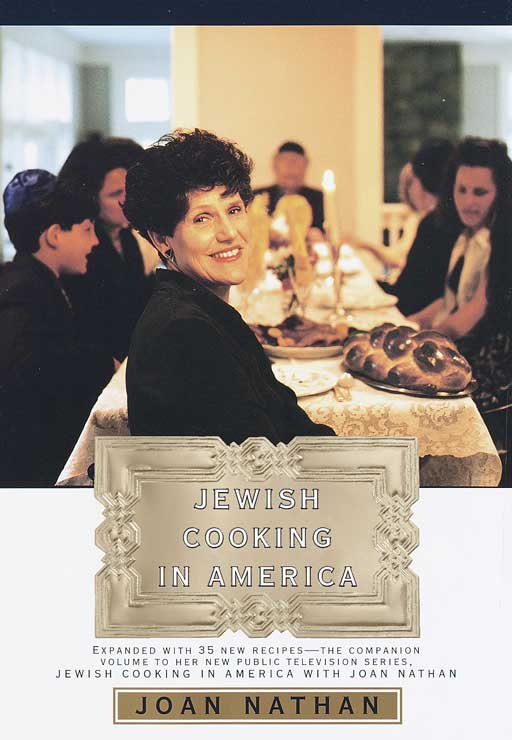 Nathan’s book is a hybrid of history and food: with every recipe, she gives you a bit of its backstory, the evolution of how it came from its Jewish homeland to the United States, and where it can be found in contemporary Jewish America. Beyond all the fantastic recipes, Nathan also includes a hilarious look at the fun facts of Jewish cuisine. Did you know that the matzah business was revolutionized when Dov Behr Manischewitz invented a machine that produced 50,000 pounds of matzah a day? Nathan also tells us how lox and bagels and Lindy’s cheesecake became household words, and how American products like Crisco, cream cheese, and Jell-O changed forever Jewish home cooking. Nathan’s book, like the Passover meal itself, is full of history, and it inspired me to make something as authentic as what my great-grandparents would have made during their first Passover after leaving the shtetls of Hungary and Poland—something Nathan herself deems“My Favorite Brisket (Not too Gedempte Fleysch)”

What is Gedempte Fleysch? Well-stewed, Nathan says. “That’s how Eastern European Jews prefer their meat. Slow cooking, of course, became a practical necessity with grainy cuts of forequarter meat. Because a brisket stretched into many meals, it was an economical cut for large families in Europe. Leftovers were ground up to stuff knishes or kreplach. The meaty gravy became the base for a midweek cabbage or potato soup or a sauce to cover pompushki, Ukrainian baked dumplings, which resemble Pepperidge Farm’s rolls. In this country it became particularly popular.” Of course, if you were at my seder, you didn’t leave any for leftovers . . .

Brisket is usually a large cut of meat, fatty on one side, rippled and meaty on the other, from the front quarters of the cow. You cook the meat much like you would for boeuf bourguignon, stewing the meat for several hours with vegetables and broth, until it’s so tender it flakes apart on your fork and melts in your mouth. Make sure you get out the biggest pot you own, you’ll need it. (I used the same one as for my bourguignon.) Also, this recipe takes a lot of time—4 hours minimum, possibly 7 hours if you let it rest, so start cooking early in the day!

First rub the brisket thoroughly with salt and pepper and a whole clove of garlic (the garlic flavor will get into the meat even if it isn’t chopped). In a large stockpot, heat a few tablespoons of olive oil, and put the brisket in for a minute or two, just to sear it. Remove the meat, cover the bottom of the pot with 3 diced onions, and put the meat in, fat side up, on top. Which side is fat side versus regular side? (You’ll want the face side down the top so that it’ll be easier to skim off at a later stage.) 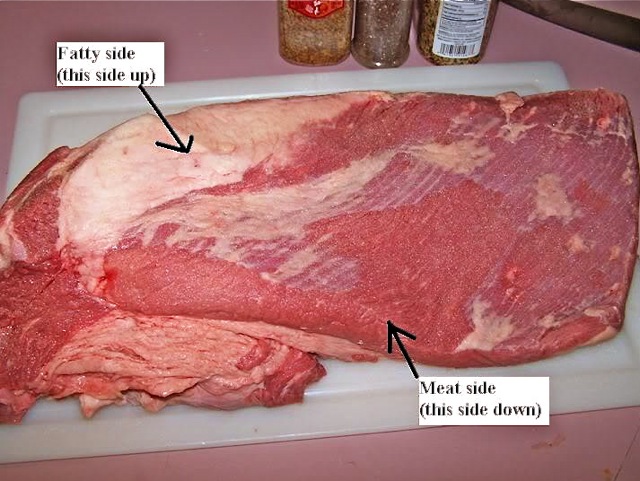 Cover with tomatoes, red wine, celery, bay leaf, thyme, and rosemary. It’ll be a little tough to fit all of that meat, broth, and veggies into the pot, but don’t worry, the meat will cook down and it’ll eventually all fit. 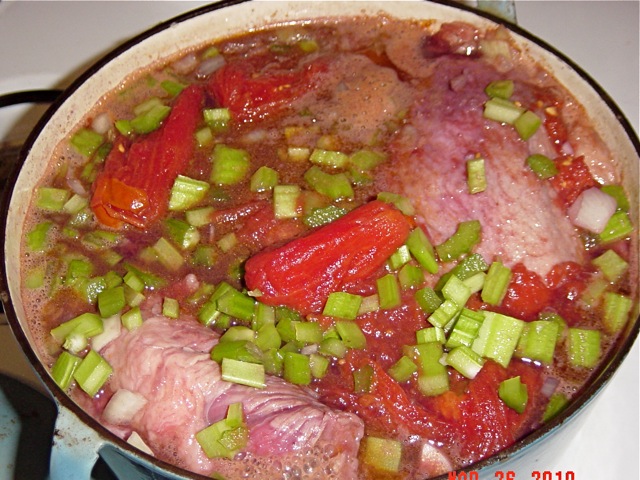 Cover and bake in a preheated 325-degree oven for about 3 hours, basting every twenty minutes with pan juices. This gave me just enough time to prep the matzah ball soup, tsimmes (sweet potatoes, carrots, honey and cinnamon), and charoset (apples, pecans, sweet red wine, cinnamon, and peanut butter.) One good thing about slow-cooking brisket: leaves you plenty of time to do other things! After about 3 hours have passed, check back in on the brisket. 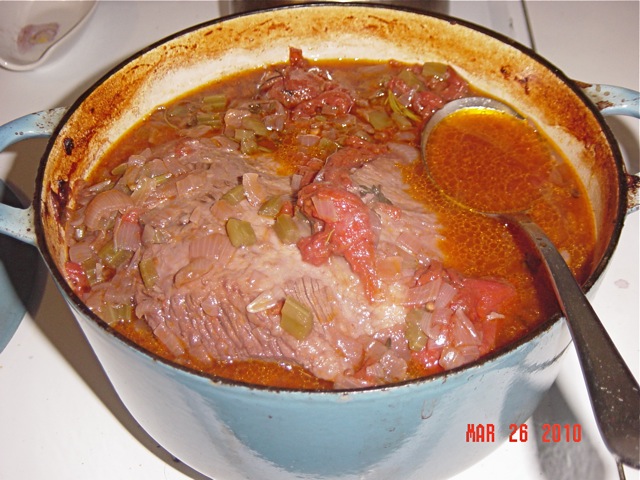 You can see from the liquid level changing that the meat and vegetables have absorbed some of the liquid, and that fat is starting to float to the top of the broth. (Good thing you didn’t trim it all off beforehand!) Add chopped carrots and parsley to the top, and return it to the oven, uncovered, for about 30 minutes, until the carrots are cooked. 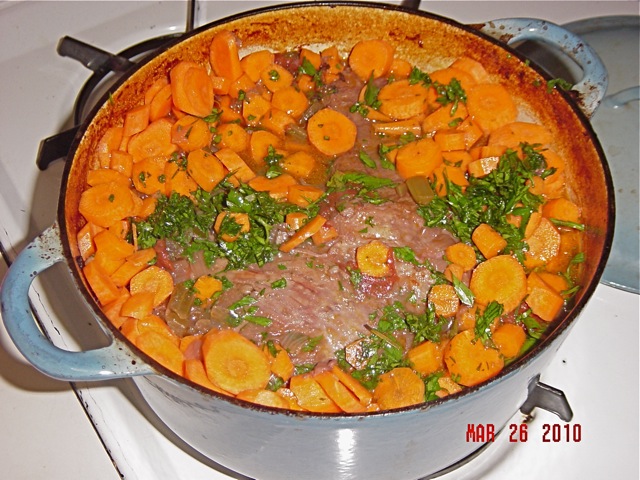 To test for doneness, stick a fork in the flat (thinner or leaner end) of the brisket. When there is a light pull on the fork as it is removed from the meat, it is “fork tender”. Let the entire dish cool, then stick it in the refrigerator for a few hours. (If you really work ahead of time, do it so it rests overnight.) This will make it easy to skim all the fat from the surface of the sauce.

After its cooling period is done, remove the brisket from the pot (retain all the sauce on the side.) Trim any visible fat you see (it’ll appear thick and creamy pale yellow.) Place it on a cutting board on what once was the fat side down, and look for the grain—the muscle lines of the brisket. Cut across the grain into thin slices. 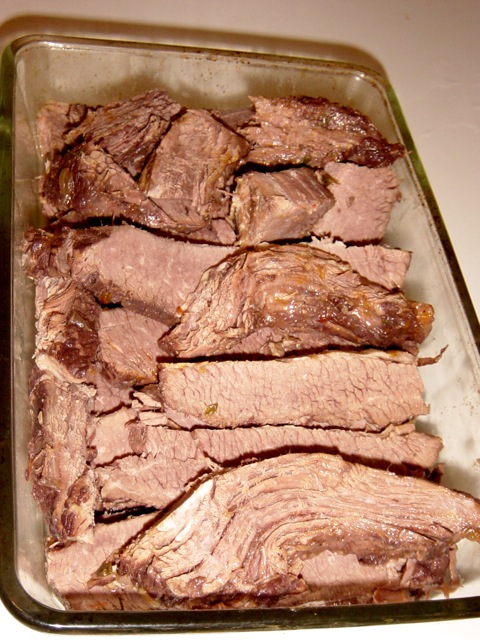 When ready to serve, reheat the gravy. Put the sliced brisket in a roasting pan, and pour the hot sauce over it. Reheat in a preheated 350-degree oven for 45 minutes. You’ll end up with more gravy than will probably fit over the brisket, but just save it on the side . . . this was the first moment I realized I wasn’t happy about Passover, because I wanted to eat this sauce with a thick crust of bread, and all I had was thin, non-absorbent matzah. 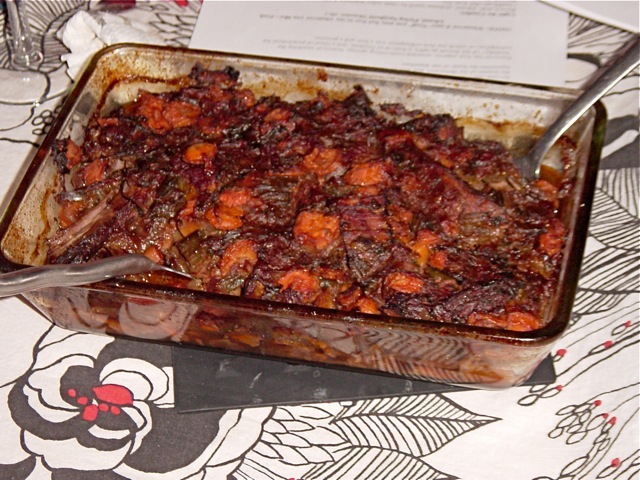 So much better than I expected—by now the brisket was melting away until a pile of soft vegetables and caramelized onions, and completely sublime to eat. I didn’t think something could top boeuf bourguignon . . . but maybe Joan Nathan would have Julia over for Passover to make up for it.

P.S. Post-Passover, I did get to try the sauce with a bit of bread after all… 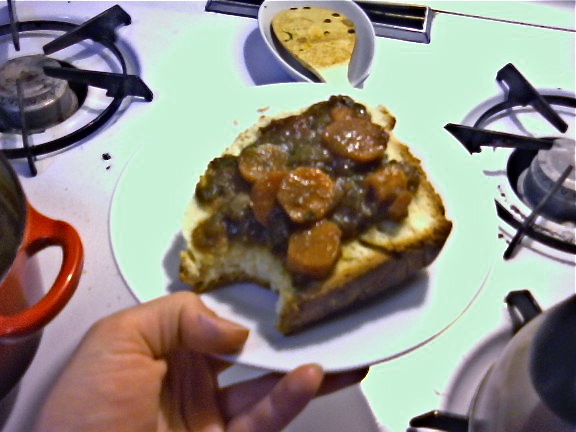