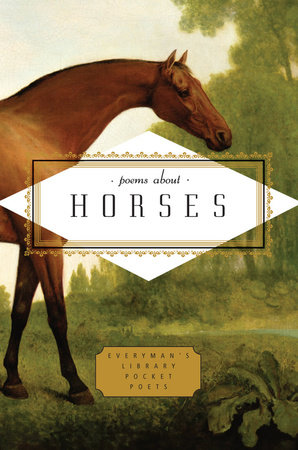 Sampling from the new Pocket Poets volume Poems About Horses—work by writers from Shakespeare and Sir Philip Sidney to the anonymous cowboy lyrics of the old West, with James Wright, Ted Hughes, Gary Snyder, Jean Valentine, Maxine Kumin, Jane Hirshfield and many others in the mix—we offer a horse song by the award-winning Idaho poet Robert Wrigley.

Of the two spoiled, barn-sour geldings
we owned that year, it was Red—
skittish and prone to explode
even at fourteen years—who’d let me
hold my face to his own: the massive labyrinthine
caverns of the nostrils, the broad plain
up to the head to the eyes. He’d let me stroke
his coarse chin whiskers and take
his soft meaty underlip
in my hands, press my man’s carnivorous
kiss to his grass-nipping under half of one, just
so that I could smell
the long way his breath had come from the rain
and the sun, the lungs and the heart,
from a world that meant no harm.

Read more from Poems About Horses