The First Tycoon, Winner of the Pulitzer Prize, Now In Paperback 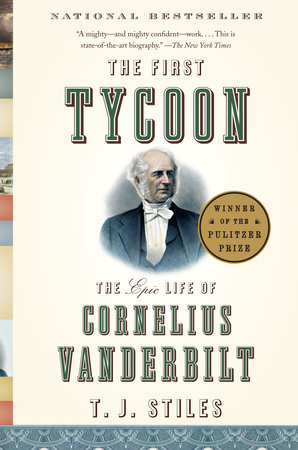 T.J. Stiles, author of the award winning The First Tycoon arrives in paperback today. The national bestseller, The First Tycoon is a winner of the Pulitzer Prize and the National Book Award, a New York Times Notable Book and A Washington Post, San Francisco Chronicle, The New Yorker, Boston Globe, Christian Science Monitor, and Kansas City Star Book of the Year.

In this groundbreaking biography, T.J. Stiles tells the dramatic story of Cornelius “Commodore” Vanderbilt, the combative man and American icon who, through his genius and force of will, did more than perhaps any other individual to create modern capitalism. Meticulously researched and elegantly written, The First Tycoon describes an improbable life, from Vanderbilt’s humble birth during the presidency of George Washington to his death as one of the richest men in American history. In between we see how the Commodore helped to launch the transportation revolution, propel the Gold Rush, reshape Manhattan, and invent the modern corporation. Epic in its scope and success, the life of Vanderbilt is also the story of the rise of America itself.

“Superbly written and researched…. Worthy of its subject.”
—The Economist