Rules of Vengeance in Paperback Today! 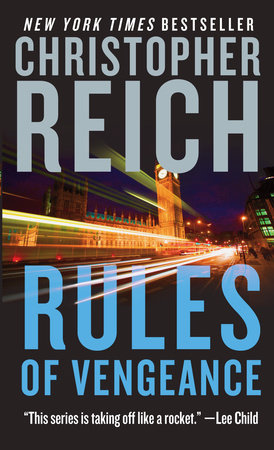 From the master of international espionage, Christopher Reich, comes the New York Times bestseller, Rules of Vengeance, now in paperback.

Months after foiling an international terrorist attack, Doctors Without Borders physician Jonathan Ransom is working under an assumed name in a remote corner of Africa. His wife, Emma, desperate to escape the wrath of Division, the secret American intelligence agency she betrayed, has been in hiding. Both look forward to sharing a stolen weekend in London—until a terrorist attack ruins their romantic rendezvous. In the aftermath, Emma disappears and Jonathan is apprehended by the police and threatened, unless he helps secure his wife’s capture. He embarks on a breathless chase across Europe, searching for Emma, and keeping Division at bay… until he realizes that all along he’s been a pawn in a high-stakes game of international intrigue far beyond his imagining.

“This series is taking off like a rocket.”
—Lee Child