Believe It: Grilling with Vegetables

Picture this: it’s summertime. You’ve got friends coming over. The grill (charcoal, bien sur) is fired up. You pull up the grill cover to reveal…what? An assembly of sausages? A matrix of burgers? No. Vegetables for a vegetarian hero!

Take back that scoff, readers. Food Network stars Patrick and Gina Neely, in their cookbook Down Home with the Neelys, offer up a recipe for grilled vegetable heroes that proves just as hearty as any meat sandwich. And this past weekend, the Borzoi Cooks (featuring a couple new members!) put the recipe to the test. Here’s the tale in their own words: 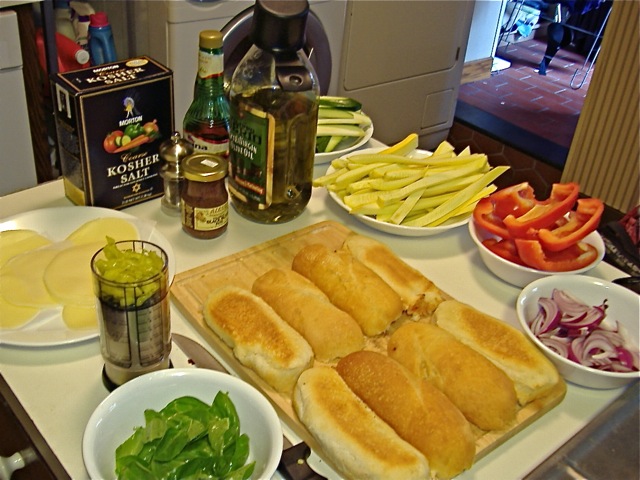 It began with a kitchen counter full of sliced vegetables. I’m going to bait you into signing up for the cooking newsletter in order to receive a complete transcription of this recipe, but the picture above should give you a pretty good idea of how to make this sandwich. That is, grill everything. Then insert vegetables into bread.

Don’t forget to find someone who actually knows how to heat a grill. Despite the massive amounts of grilling I’ve spearheaded this summer, I have not yet mastered the ability to light a grill. Fortunately, I found someone who does. These are his hands: 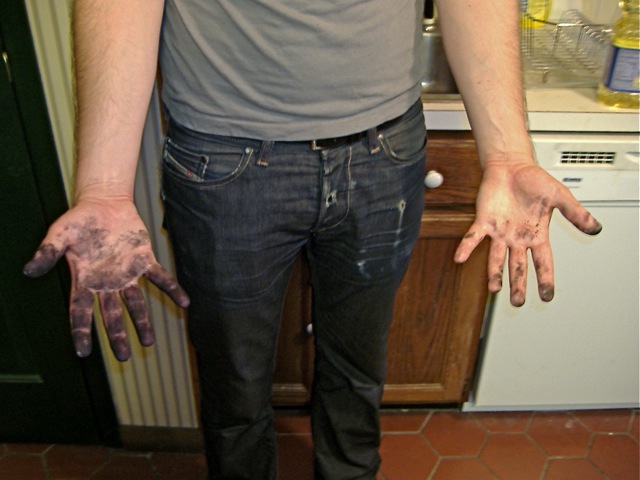 NB: I’m compelled to note that I am a charcoal grill woman, as much as one can claim a grill type without ever having lit one. Gas grills, for me, don’t yield the delicious smoky flavor that many associate with grilling, although I hear this can be remedied with wood chips. Down Home with the Neelys contains a four-page discussion on gas vs. charcoal grills, along with attendant information on grate styles and wood chip varieties. I’m tempted to call it Essential Life Reading.

Just before grilling the colorful medley of vegetables, we tossed them in a light oil-and-vinegar dressing, like so: 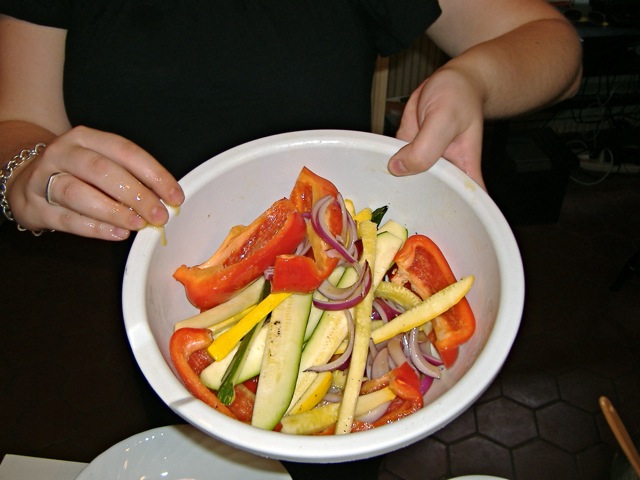 Then we marched outside into the sweltering Saturday afternoon heat for some grilling.

First, we grilled the bread, which we brushed with the leftover oil/vinegar mix. We used deliciously crunchy-on-the-outside-soft-on-the-inside Italian rolls (8 inches long, per the recipe) but in retrospect perhaps we should have used larger rolls as we did have many leftover grilled veggies. If you want an extra large sandy, go for the big guys. If you’d like leftovers, stick with the 8 inchers. 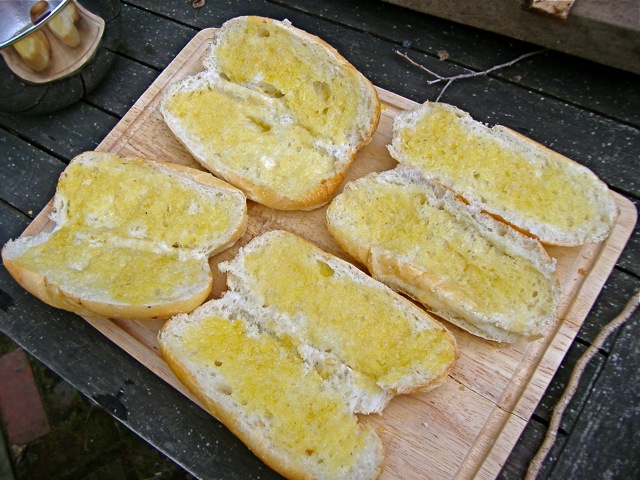 So, brush with leftover oil/vinegar dressing and grill, open side down for one minute, just until they’re a little toasted. 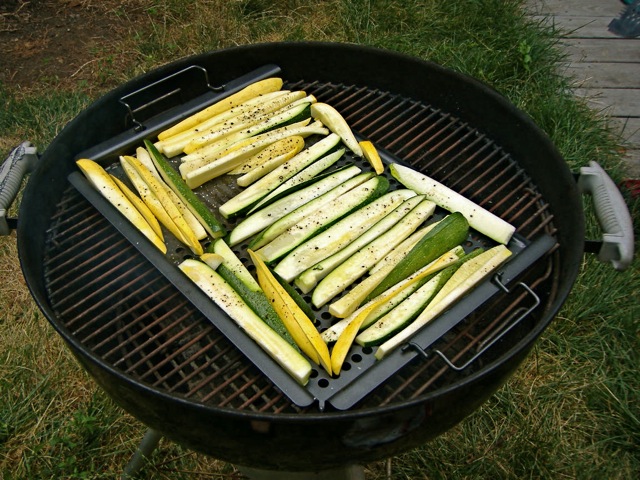 On to the veggies! While the recipe calls for a baking sheet, we had a very handy grilling pan, but either will work. We grilled the veggies in two batches (because, sadly, Brooklyn living doesn’t allow for extra large grills): squash first followed by red peppers and onions. The recipe calls for ten minutes of grilling (so five minutes a side), but depending on how grilled you like your veggies, you can leave them on for longer. Red peppers, especially, take a bit longer (we left ours on for about seven minutes a side and we got that nice blistery outside). 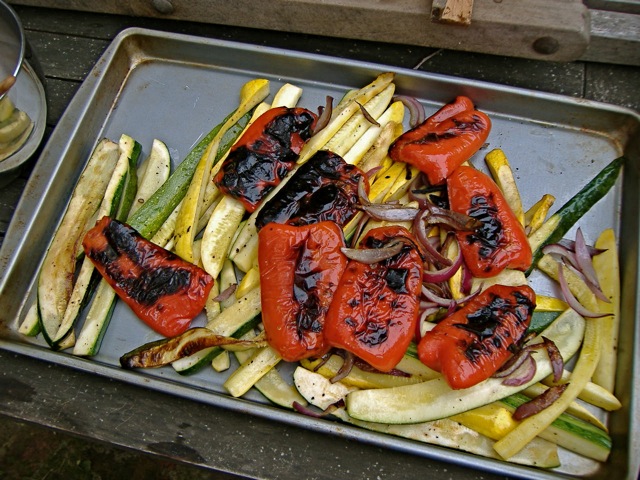 In case you forgot you just grilled the rolls, let me remind you they’ll be hot when you pick them up. (I didn’t get burned that badly.)

Everyone seems to agree the rug that ties this, um, room together is the olive tapenade. Spread that stuff on the toasty rolls like you’ll never see another tapenade again. (Who knows? Maybe you won’t.)

Throw some veggies on as you like. We used no discernible method or measure. At one point someone shouted “More onions!” I don’t remember who got the sandwich with two grilled peppers, but whoever it was made out like some sort of bandit. 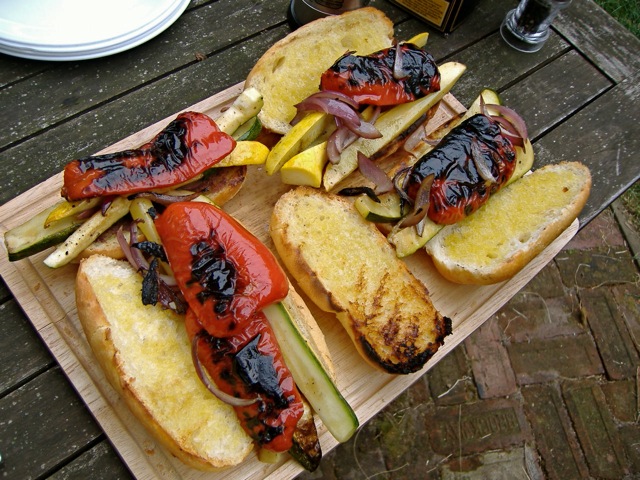 Cheese, peppers, and basil. Charmingly, Pam had counted out an exact number of basil leaves for each of our sandwiches (a number I cannot remember) [Editor’s Note: 24]. You’ll want a few, though; the sweet and spicy flavor balances the smoky vegetables and the provolone. We used peperoncini here, which were just fine as a replacement for whatever sort of pepper we were meant to use but that they didn’t carry at Met Food [Editor’s Note Pt. II: pickled banana peppers]. (This was actually a sqeaky-clean process, and nowhere near as shambolic as I’m making it out to’ve been. Semi-pro, at least.) 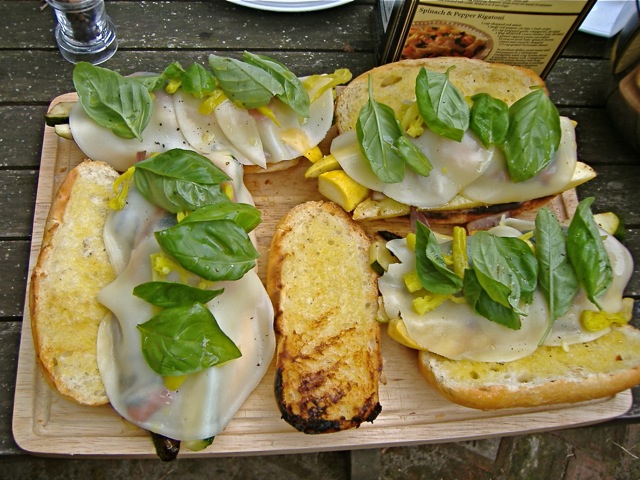 Now this part is important. The Neelys suggest you “meld the flavors” by pressing the sandwich. I don’t prefer any particular melding technique. Be creative. But be careful. Mashing will get you nowhere. Likewise squishing.

Has anyone ever looked happier with his sandwich? 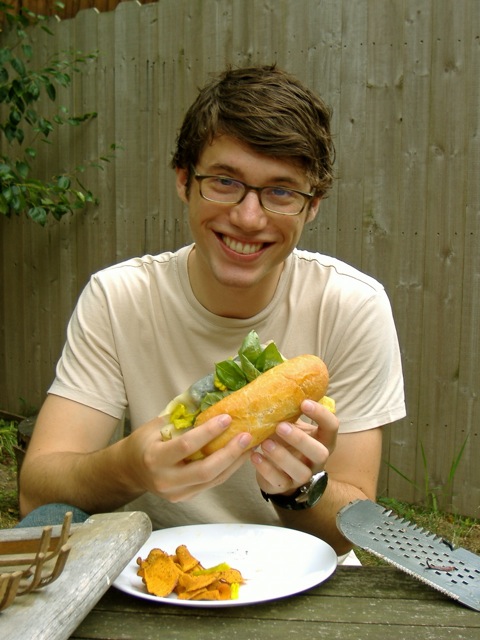 Do you want to make this sandwich? Sign up for our cooking newsletter to get the recipe in your inbox!