The World of Alexander McCall Smith

With every book in his five marvelous mystery series, Alexander McCall Smith gives you a delightful protagonist, a compelling mystery, and a reading experience unlike any other. But what if you’re new to the series, and don’t know where to start? Here we give you a rundown of the series to choose from, a quick sampler of McCall Smith’s many stories—you can find the full list of each book in the series at the bottom of this post. 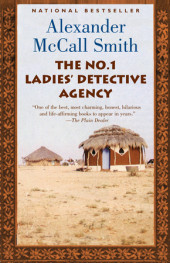 The No. 1 Ladies Detective Agency
McCall burst onto the scene in 1998 with his series about Precious Ramotswe, a single woman who used her inheritance to set up a detective agency for her community in Gaborone, Botswana. With the help of her trusted secretary Grace Makutsi, and always accompanied by a steaming cup of red bush tea, Mma (pronounced “ma” with a long “a”) Ramotswe attempts to “help people with problems in their lives,” be those problems of missing children, negligent husbands, or crimes of a larger and more insidious nature. McCall Smith grew up in Zimbabwe and later taught law in Botswana, and gives us a beautiful portrait of Africa and the citizens of Botswana. Precious is a delightful and utterly compelling character, and McCall has given us twelve mysteries with her . . . but you really only need one to become totally hooked.
Buy the first book in the series: Amazon | Barnes & Noble | Borders | IndieBound | Random House 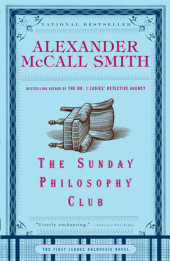 The Sunday Philosophy Club
In 2005, McCall Smith moved our focus from Botswana to Scotland, and replaced our kente cloth and red bush tea with plaid kilts and haggis. Our new heroine is Isabel Dalhousie, the editor of the Review of Applied Ethics and a detective on the odd occasion. She’s a bit of a busybody, and so when she witnesses a man fall from the upper balcony of a concert hall, she can’t help wondering whether it was the result of mischance or mischief. Where Precious feels compelled to help her community, Isabel is compelled by her moral duty, even when her many loyal friends advise her to keep her nose out of it. You can spend seven wonderful novels with Isabel, investigating the moral quandaries that come with being a detective that wants to do right.
Buy the first book in the series: Amazon | Barnes & Noble | Borders | IndieBound | Random House 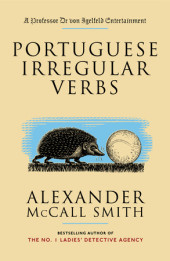 Portuguese Irregular Verbs
In a break with his dedicated mysteries, McCall Smith takes a turn for the hilarious with a trilogy of stories about the eminent (if shamefully under-read) philologist Professor Dr. Mortiz-Maria von Igelfeld of the Institute at Regensburg. Unnaturally tall, hypersensitive to slights, and oblivious to his own frequent gaucheries, von Igelfeld is engaged in a never-ending quest to win the respect he knows is due him. Portuguese Irregular Verbs follows the Professor from a busman’s holiday researching old Irish obscenities, to a flirtation with veterinary medicine (without a license), and through the slings of academic intrigue outrageous fortune in an eventful Colombian adventure. While less than mysterious, this trilogy is deliriously funny and worth your read.
Buy the first book in the series: Amazon | Barnes & Noble | Borders | IndieBound | Random House 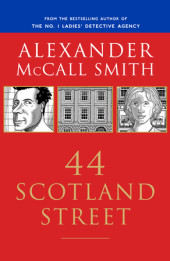 44 Scotland Street
Not far from Isabel Dalhousie’s house sits 44 Scotland Street, a boarding house with a cast of colorful characters. The mysteries in this series sit with the residents themselves, among them Irene and her precocious son Bertie; Domenica, an eccentric widow; and Pat and Bruce, flatmates just getting to know each other. Though much of the story is told from Pat’s point of view, as she tries to figure out her future there are many helpful (and sometimes over-helpful) voices chiming in from throughout the house. Whatever the question, someone in 44 Scotland Street has the answer, and McCall Smith has five lovely novels to chronicle the process.
Buy the first book in the series: Amazon | Barnes & Noble | Borders | IndieBound | Random House 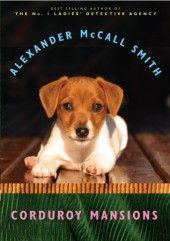 Corduroy Mansions
Though there’s still much to chew over in Edinburgh, McCall Smith’s latest books have moved to London, and our most endearing new character is . . . a vegetarian dog. Corduroy Mansions is the affectionate nickname given to a genteel, crumbling mansion block in London’s vibrant Pimlico neighborhood and the home turf of a captivating collection of quirky characters, including the middle-aged wine merchant William (and Marcia, the caterer who has her eye on him); the (justifiably) much-loathed Member of Parliament Oedipus Snark and his mother, Berthea; Snark’s long-suffering girlfriend, Barbara; a vitamin evangelist, a psychoanalyst, an art student with a puzzling boyfriend and Freddie de la Hay, the Pimlico terrier who insists on wearing a seat belt. It’s hard not to fall in love with the denizens of Corduroy Mansions, and in this newest series from McCall Smith (only one book so far, but many more to come), readers are sure to find a whole new world of captivating characters. . . .
Buy the first book in the series: Amazon | Barnes & Noble | Borders | IndieBound | Random House

And now, the full list of McCall Smith’s titles, ready for the reading! Take a day or two in your busy fall reading schedule, hunker down with an afghan and a cup of hot tea, and dive into a McCall Smith novel. We promise you a very good time with any one of these marvelous stories.

The No. 1 Ladies’ Detective Agency Series
The No.1 Ladies’ Detective Agency
Tears of the Giraffe
Morality for Beautiful Girls
The Kalahari Typing School for Men
The Full Cupboard of Life
In the Company of Cheerful Ladies
Blue Shoes and Happiness
The Good Husband of Zebra Drive
The Miracle at Speedy Motors
Tea Time for the Traditionally Built
The Double Comfort Safari Club
Coming in March 2011! The Saturday Big Tent Wedding Party