The Charming Quirks of Others Now on Sale 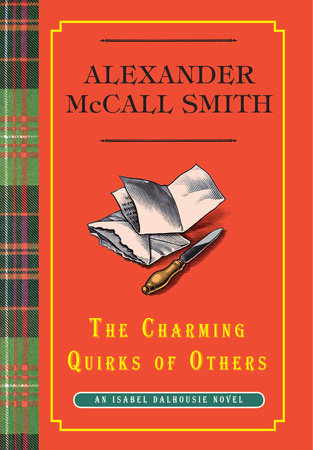 Alexander McCall Smith’s acclaimed Isabel Dalhousie series just added a new installment with The Charming Quirks of Others, in which our lovable heroine comes to see that there are very few of us who are not flawed . . . herself included.

McCall Smith fans don’t have to wait much longer to see him in person. His fall 2010 tour kicks off this week, and he will be appearing in NYC at the Barnes & Noble Lincoln Center (1972 Broadway) on Monday, October 18 at 7:30 pm. Don’t miss it!

Praise for the Isabel Dalhousie series

“Charmingly told. . . . Its graceful prose shines, and Isabel’s interior monologues—meditations on a variety of moral questions—are bemused, intelligent and entertaining.” —The Seattle Times

“In Mma Ramotswe, [McCall Smith] minted one of the most memorable heroines in any modern fiction. Now, with the creation of Isabel Dalhousie, he’s done it again. . . . She’s such good company, it’s hard to believe she’s fictional. You finish [one] installment greedily looking forward to more.” —Newsweek