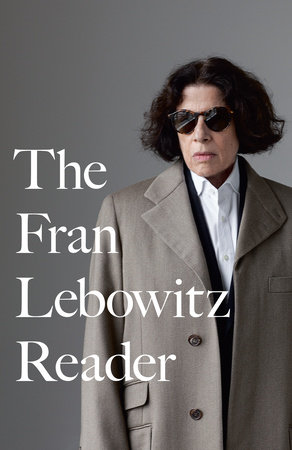 Once you’ve picked up The Fran Lebowitz Reader, it’s nearly impossible to put down. Flipping through the pages, your eye catches all sorts of snappy observations, bon mots, and witticisims. So it’s no surprise that Martin Scorsese chose her as the subject of his latest film, a documentary called Public Speaking that debuts Monday, November 22nd, on HBO. After the jump, watch a trailer for the documentary — and check out some of our very favorite Fran quotes.

On Living:
“There is no such thing as inner peace. There is only nervousness or death. Any attempt to prove otherwise constitutes unacceptable behavior.”

On Nature:
“…the outdoors is what you must pass through in order to get from your apartment into a taxicab.”

On Politics:
“My political position is based largely on my aversion to large groups, and if there’s one thing I know about Communistm it’s that large groups are definitely in the picture.”

On Dining:
“If food did not exist it would be well-nigh impossible to get certain types off the phone, as one would be able to say, ‘Look, I’ve got to run but let’s have dinner sometime soon.'”

On the Ideal State of Being:
“I love sleep because it is both pleasant and safe to use. Pleasant because one is in the best possible company and safe because sleep is the consummate protection against the unseemliness that is the invariable consequence of being awake. Sleep is death without the responsibility.”

Plus, set your DVR for Fran’s Appearances On: