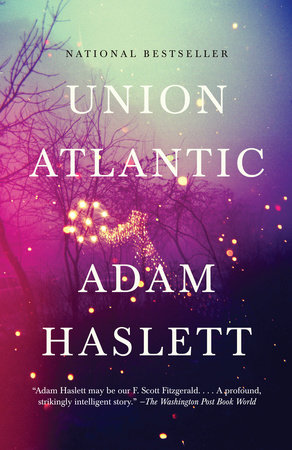 Adam Haslett’s debut novel, Union Atlantic, is anchored by its three central characters and their intertwining lives. Charlotte Graves, a retired history teacher, tenaciously guards her way of life even as change closes in around her. Doug Fanning, an ambitious banker used to getting his way, finds an unexpected but worthy foe in Charlotte. And Nate Fuller, a high school student just learning how to navigate the world’s complexities, finds himself caught between the two adults. In honor of the paperback publication of Union Atlantic,—and in honor of Charlotte, Doug, and Nate—we’ve asked Adam to pick five of his favorite literary characters. Check out his picks below, and click here to read an excerpt of Union Atlantic. You can also download a reading group guide by clicking here.

Ginny Cook
from A Thousand Acres by Jane Smiley

To narrate her modern re-writing of King Lear, Jane Smiley created Ginny Cook, a steely, determined young wife who has kept the secret of her father’s mistreatment for too long. By the end of the book she has become something closer to a force of nature. The self-knowledge she earns—knowledge her father never had—is, she says, “the gleaming obsidian shard I safeguard above all the others.”

Lily Bart
from The House of Mirth by Edith Wharton

Lily Bart is one of the most heartbreaking heroines in American fiction. Her struggle to remain respectable in New York City’s changing society—without dying inwardly by entering a loveless marriage—is riveting and splendidly written.

Quentin Compson
from The Sound and the Fury and Absalom, Absalom! by William Faulkner

Young Quentin Compson is, to my mind, Faulkner’s richest creation. He is the doomed second son of the doomed Compson family, haunted by the bitter inwardness of the defeated south, and he narrates Absalom, Absalom! in language so forceful and full of pathos it will take your breath away.

Alice Munro’s independent women
from the stories of Alice Munro

While it’s possible to pick particular protagonists from individual Alice Munro short stories, I would nominate for the canon of literary characters the collective portrait she has painted over the last forty years of a certain kind of independent woman: willful, impatient, naïve when younger, often amorally knowing in middle and old age, and consistently unflinching in her assessment of the people around her.

Bjartur of Summerhouses
from Independent People by Halldor Laxness

The hero of this five hundred page masterpiece about dirt-poor sheep farmers in early 20th century Iceland, Bjatur is young father longing to be independent from all the familiar and social forces that would constrain him. Sometimes thuggish, sometimes gentle, and deeply loyal, he is a consistently irresistible literary character.