My croissants were not a failure, exactly, but were certainly unsuccessful. I’ll walk you through my baking experience, pointing out specifically where I think I may have gone wrong. May you learn from my struggles.

The first error came at the very (and I mean very) beginning of baking. It was a stupid mistake, but I think it may have had real consequences for the croissants. Basically, I had no hot water—although I ran the tap for a while, all I got was some extremely lukewarm water. I didn’t especially want to heat water on the stove, so I crossed my fingers and hoped for the best.

All seemed well, because after running out to buy milk at the farmer’s market, the yeast/water/sugar mixture had foamed. 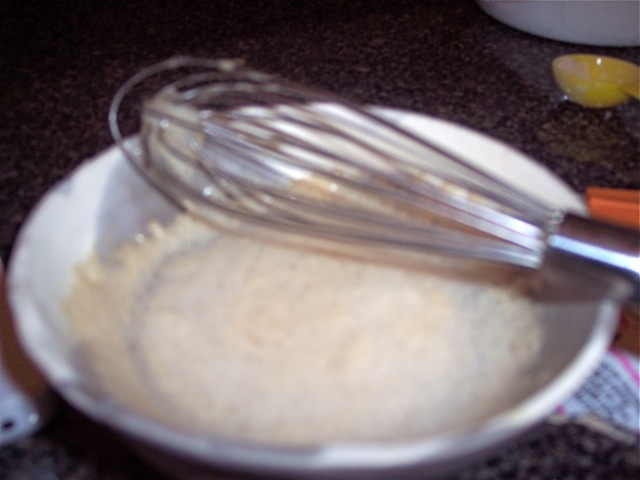 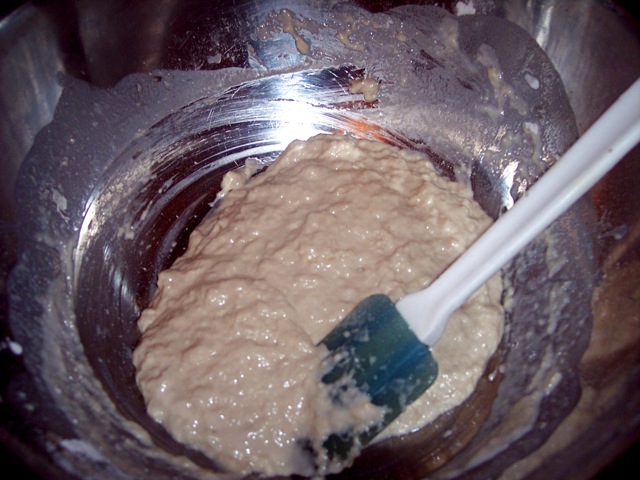 The second problem, immediately following this first, was that I overheated the milk. Instead of warming it to “tepid,” as Julia Child recommends, I scalded it slightly. My fear, then, is that the yeast only partially activated in the cool water, and that I then killed it with over-warm milk. But who can say? All I really know is that although it rose, it didn’t quite get to the point Julia suggests, even after four hours. I should have known then that things were going awry. 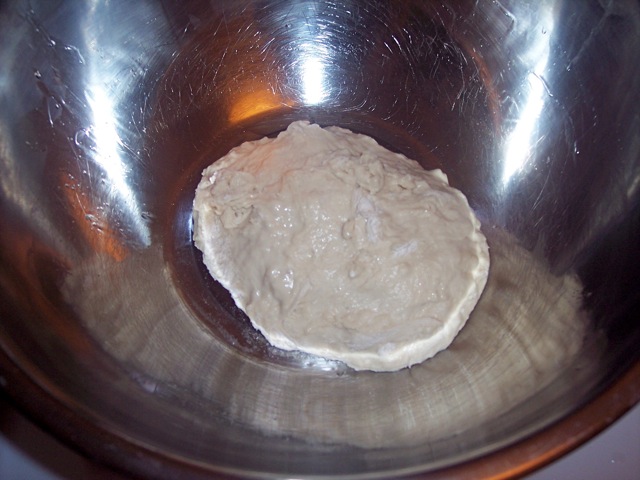 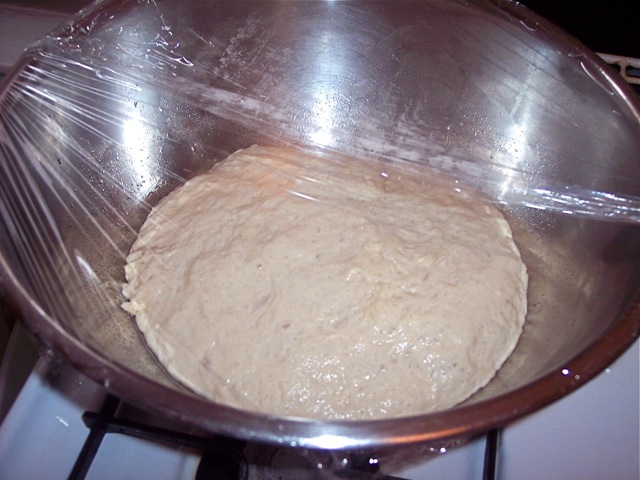 But the second rise was actually very successful. The dough expanded to twice its original size in less time than the recipe demanded. 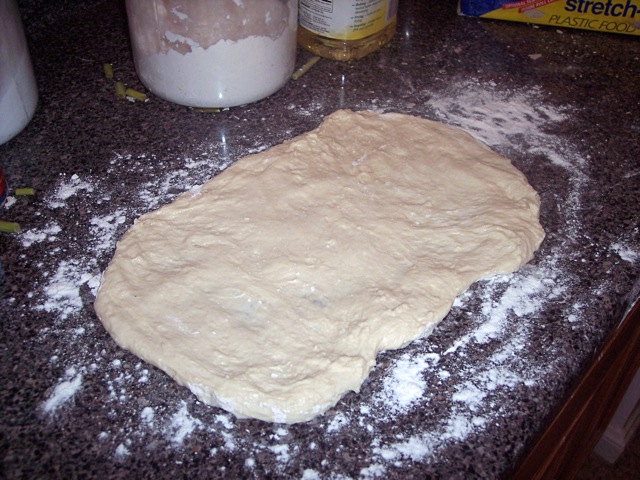 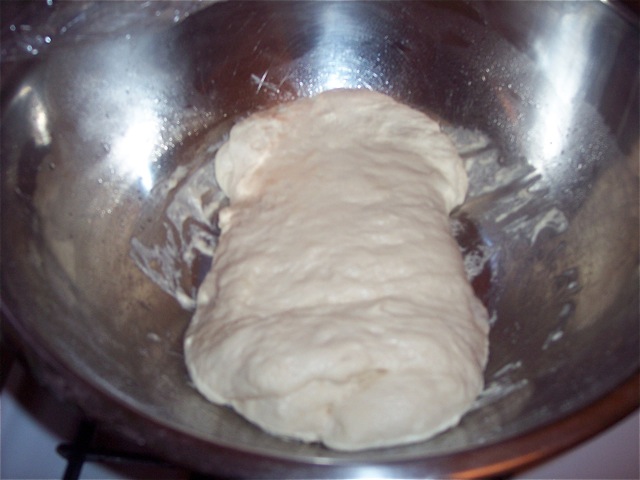 After chilling the dough, it was time to soften and add the butter.

Now here is actually where I made my third error, and I think the recipe is a bit unclear, so it might be useful to note this. You make four turns of the dough, but only on the first do you apply butter. Admittedly, Julia only mentions butter on the first turn, but it almost seems as though she’s assuming that you will remember to add butter on all four turns. So, lesson: use all of the butter on the first turn. Since I didn’t, my butter (you’ll see it on the counter) got warm. Luckily, this doesn’t seem to have affected the ultimate flakiness of the croissants, but it was a mistake nevertheless.

Still, I think my application of the butter to the dough was fine.

I have no photo or video documentation of the next chunk of the recipe. The reason: this is where everything truly blew up, where I started both yelling out loud and calling Julia Child some extremely unkind things in my mind. Basically, she suggests that you roll your dough out into rectangles, cutting those rectangles into three squares, and cutting those squares into two triangles, refrigerating anything you’re not using.

But dough is elastic and springy, and also stretchy, and every time I carried a piece over to the refrigerator, my more or less square piece became a rectangle incapable of reverting back to a square. I tried cutting it in half and joining the two pieces, and of course the new square fell apart. I tried measuring the inches even more carefully. Didn’t work. In the end, I had to lump all the dough together and roll it out, cutting squares out as I needed them, and not carrying them anywhere, a process which probably ruined all of my neat layers of pastry.

Anyway, I finally had some things that were fairly croissant-shaped. 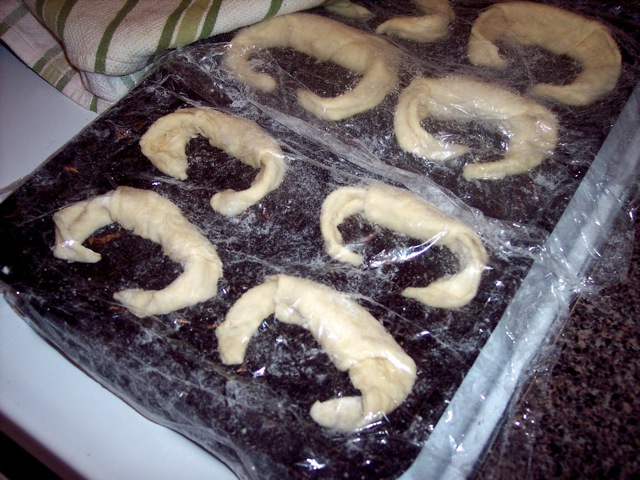 You could make them better-looking, I think, if you more carefully stretched out the triangles and rolled them more tightly, but I was so distressed from the previous step that I rushed a bit.

The croissants rose. Kind of. Julia says they should expand to three times their original size, but as you’ll see, they only rose to about one and a half or two times that size. 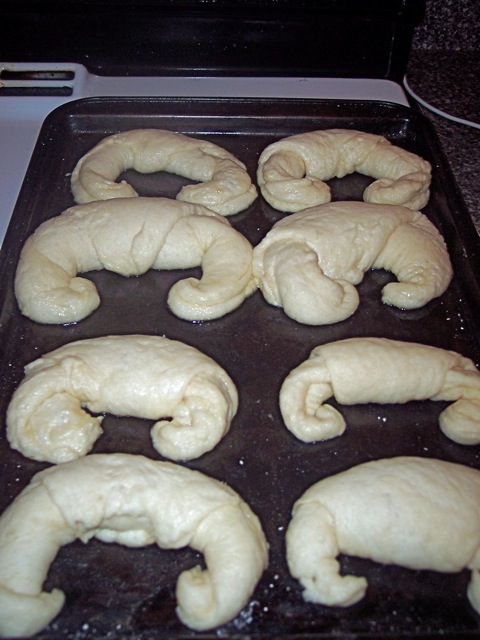 When they came out of the oven, I was disappointed. They were small. Too glossy. Biscuity. But when I ate one, I was surprised—they were flaky and buttery, much of the croissanty goodness preserved. 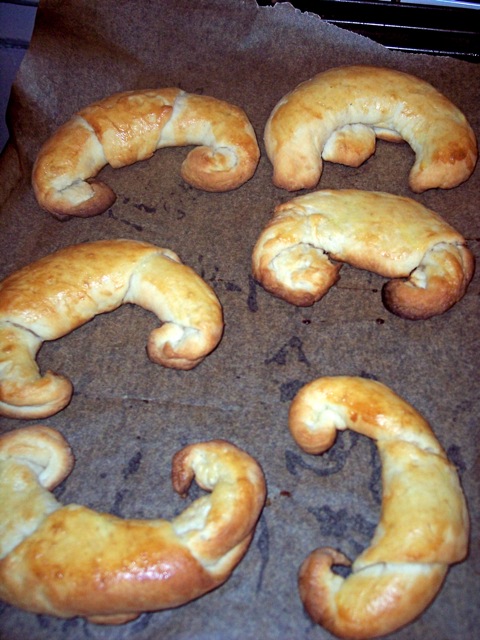 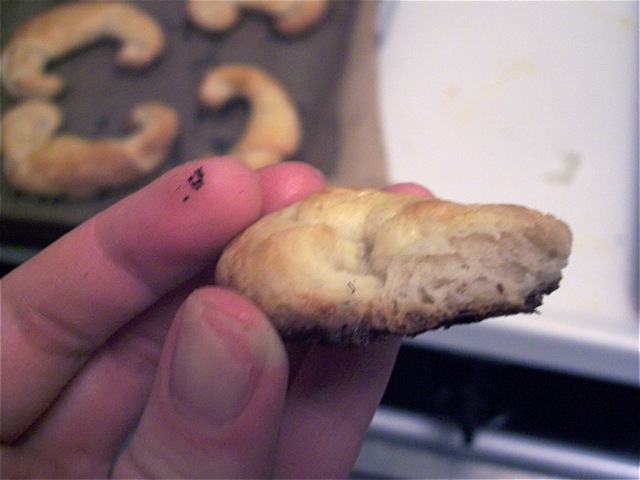 My point being: these were not what I’d imagined, but they weren’t so bad. With some adjustments, I think it shouldn’t be so difficult to make these truly special, worth the time and effort of making them.