I have heard in the past that undertaking a Julia Child recipe is the quintessential act that separates those who cook to live from those who cook for the love of the act itself. Now I don’t consider myself a cook or a foodie by any means, but I definitely LOVE being in the kitchen. It reminds me of some good times passed and of home and family in my native country of Ecuador. Needless to say,  when presented with Julia’s recipe for baking croissants, three things came to mind: 1. What a fantastic way to recreate the ‘feel’ of breakfast back home (and even though ‘home’ for me is not France, our breakfast consists of pretty much the same: bread and butter, cheese, juice, and coffee); 2. How cool would it be to get her recipe right the first time! (the thought became a goal, and my desire to achieve it turned into a temporary obsession); 3. (AND of course) Not least of all—bragging rights!

Well, I should tell you now that I wasn’t successful in recreating the croissants (no bragging rights), and I’ll admit it was a bit heartbreaking, but I had a blast making them, and I’m now more determined than the ever to bake them until I get them right!

My advice when baking these: do it with a friend or a partner and rent some movies for the ‘rising period interims’ or have a book at hand if going at it solo. Most importantly Do NOT bake this overnight on a daylight savings day, when you will lose an hour in the process, like I did! (It will make the whole process seem a lot longer than it really is.)

So where did I go wrong? Here’s the breakdown:

I set up my mise en place, and mixed everything together as instructed. When I went back to the recipe I realized that I neglected to let the dough rest after mixing, which probably over-activated the gluten. Oh the beginning of the end! 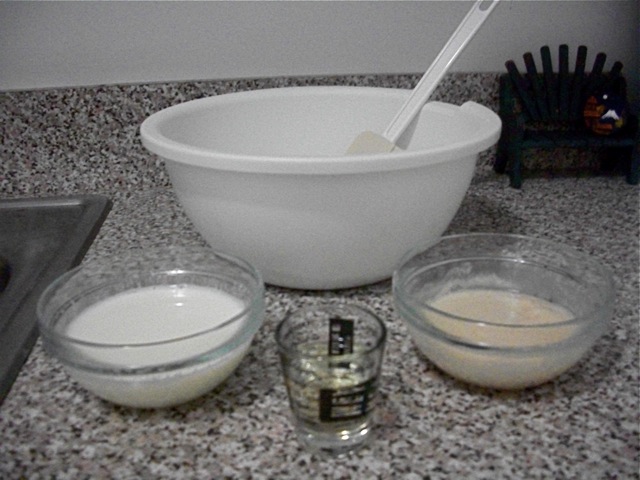 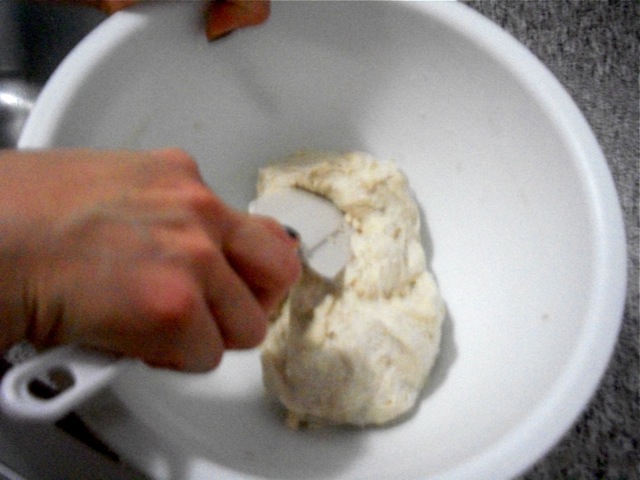 Two rises followed: the first being 3 hours long with the dough covered and left to sit at room temperature. Julia indicates that we should let the dough rise to about 3 ½ the original size. To calculate how much that would be, I filled up the mixing bowl with water and made a mark on the outside of the bowl. (To kill the time, I decided to watch Breakfast at Tiffany’s; my eyes felt too blurry to sit and read.) Here is where I ran into problem No. 2: After the 3 hour mark, I went to check on the dough—it rose, it rose! 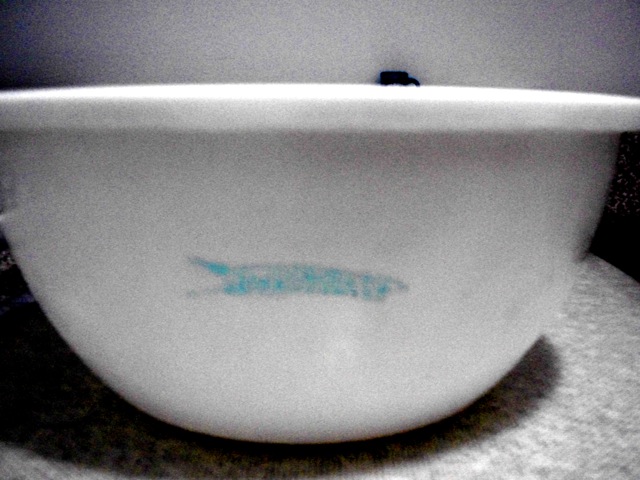 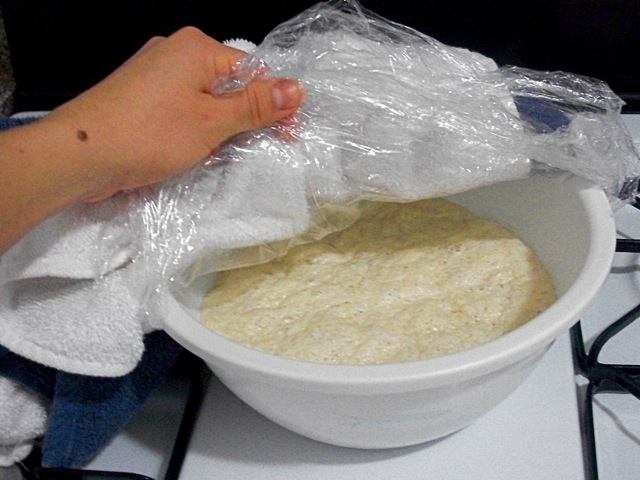 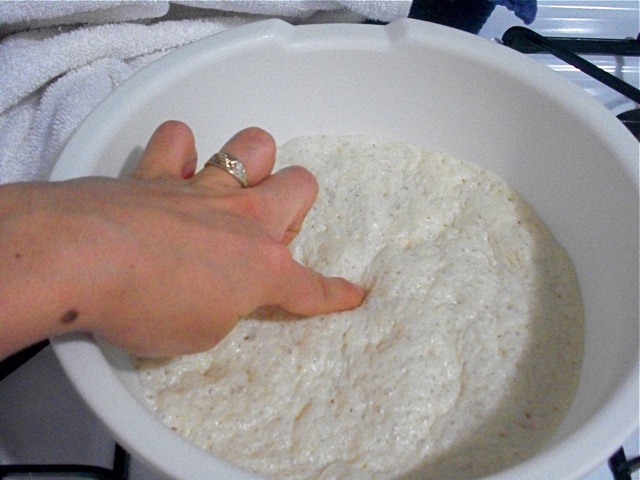 Sadly, I grew so excited by this that I began to scrape the dough out of the mixing bowl when it hit me: did it rise to the marked point? (I completely forgot about it!) Oh hell, it didn’t! So I hoped and prayed that if I let it sit a bit longer, it would rise some more—and it did. My sense of hope renewed, I continued on with the instructions and prepped for the second rising. It was successful. At this point I had to add the butter, and fold the dough a total of four times. The first two folds to be followed by a resting period of 1 ½ hrs, with the folded dough wrapped in plastic, and refrigerated, to deactivate the gluten. 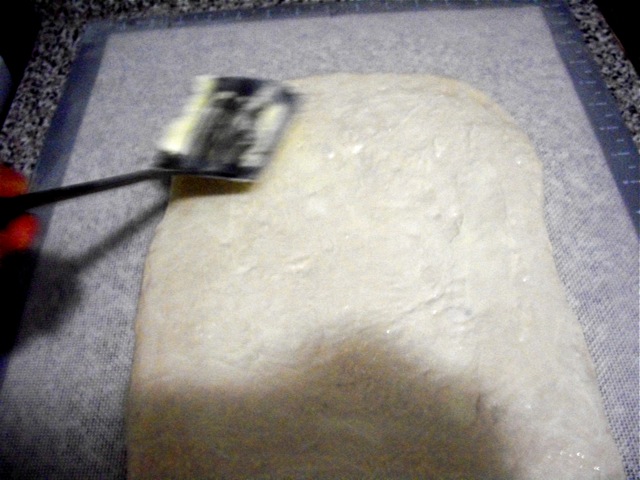 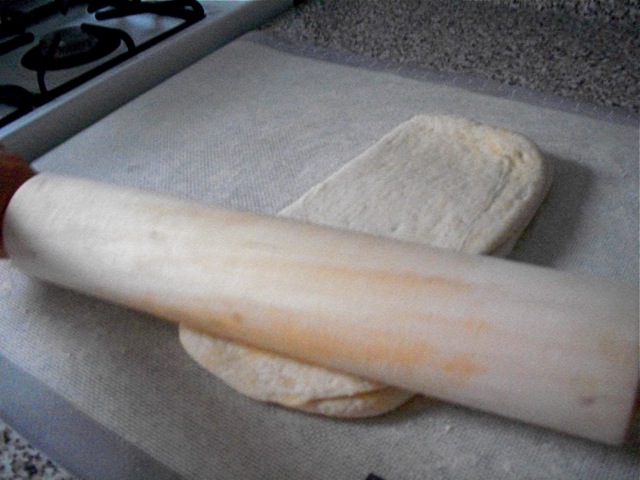 I am not sure if this was where I ran into problem No. 3. You see, the recipe states that after I take the dough out of the fridge, I am supposed to deflate the dough. (There was no deflating to be done; it didn’t rise, not like the other times anyway.) I let it rest a few minutes, and folded again, 3 and 4, and back in the fridge it went. Two hours and three cups of coffee later, the croissant forming challenge began!

This was not an easy undertaking in the least, but I loved the challenge. I did not have a triangle-cutting roller, so I did the cutting manually as instructed. I rolled out the dough into a 20″x5″ rectangle and cut it in half, placing the unused piece in the fridge to prevent it from getting soft and difficult to manage. I then cut each half into three squares, which were then to be cut diagonally into triangles. Not a minute passed as I did this, but sure enough the dough grew soft and quite unmanageable. My perfectly cut-out squares soon became rectangles. (I felt like Richard Burton in The Taming of the Shrew with this dough!) 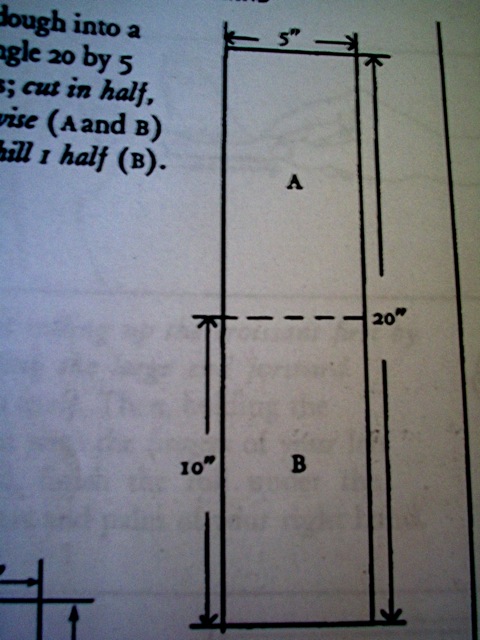 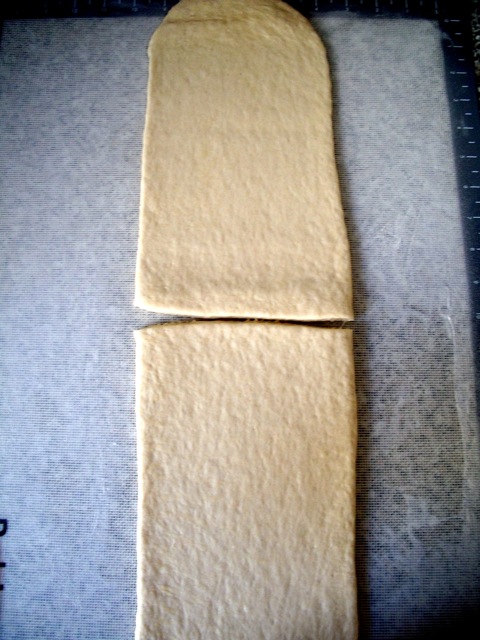 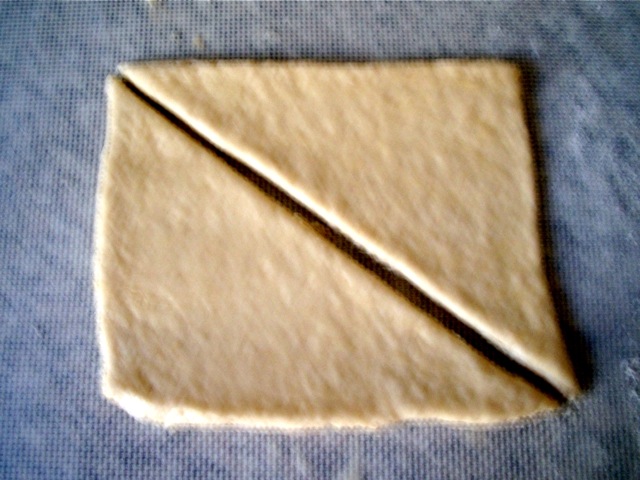 I worked as quickly as I could, and sure enough, I somehow was able to roll these suckers into croissant-like shapes—I was SO proud! Now it was time for the final rise. 1 ½ hrs later, these babies were ready to be glazed and baked. 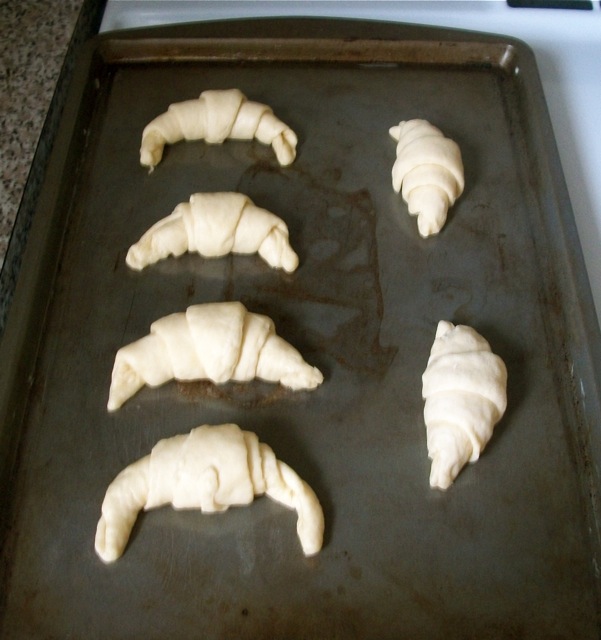 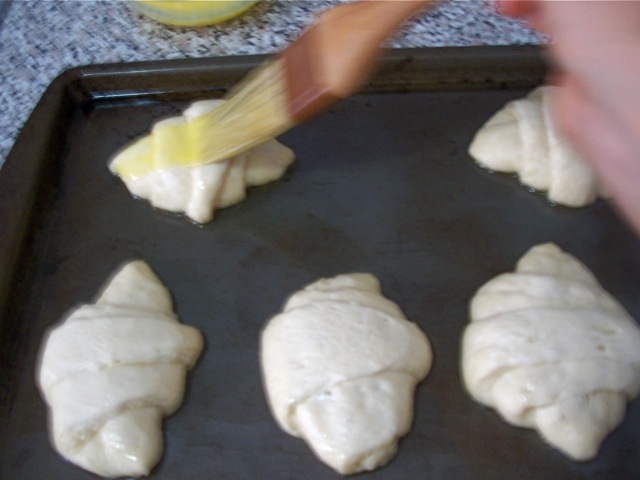 This part really kills me. I laugh at the silliness of it now, but really I should have known better! The croissants a-glazed, the oven at 475°F, croissants in the oven now, 3 minutes passed and—smoke! I didn’t think about how much hotter and quicker the croissants would bake when I placed them on the bottom shelf of the oven. I opened the oven door, and—alas—the butter oozed out and the corners burnt. The croissants were over-baked! No saving them now. 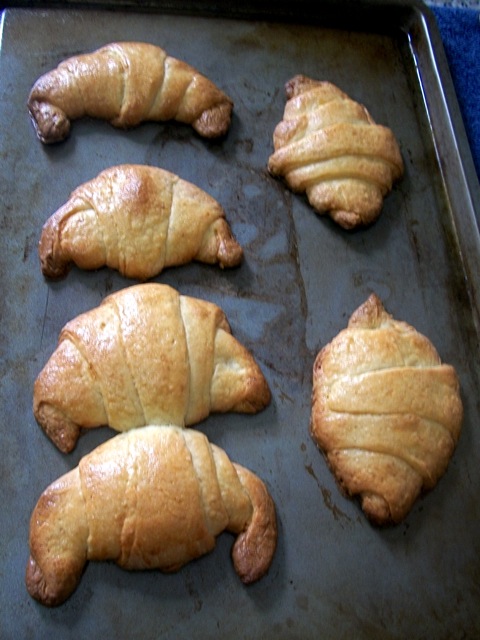 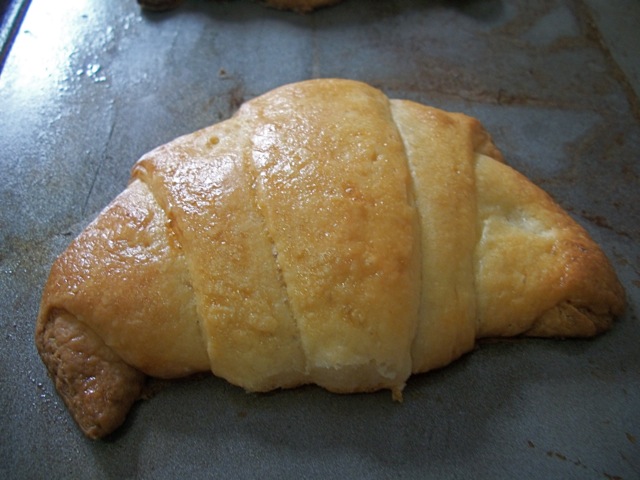 I took the croissants out, and in a state of mild sleep deprivation combined with a “caffeine high,” I thought I should at least plate the little rascals and celebrate my first attempt at baking them. A little pat on the shoulder for the hard work—why not? 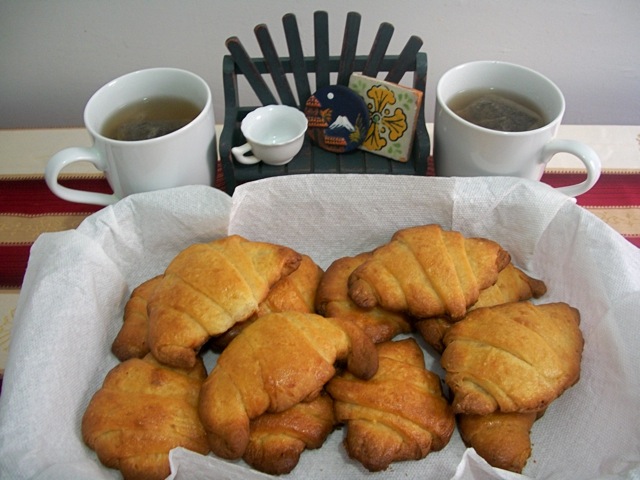 All said and done, it truly was a lot of fun and a great learning experience. This will definitely not be the last time I take on this recipe.