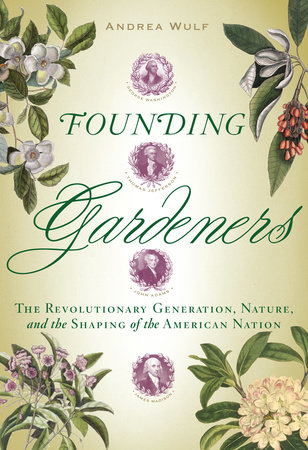 From the author of the acclaimed The Brother Gardeners, a fascinating look at the founding fathers from the unique and intimate perspective of their lives as gardeners, plantsmen, and farmers.

For the founding fathers, gardening, agriculture, and botany were elemental passions, as deeply ingrained in their characters as their belief in liberty for the nation they were creating. Andrea Wulf reveals for the first time this aspect of the revolutionary generation. She describes how, even as British ships gathered off Staten Island, George Washington wrote his estate manager about the garden at Mount Vernon; how a tour of English gardens renewed Thomas Jefferson’s and John Adams’s faith in their fledgling nation; how a trip to the great botanist John Bartram’s garden helped the delegates of the Constitutional Congress break their deadlock; and why James Madison is the forgotten father of American environmentalism. These and other stories reveal a guiding but previously overlooked ideology of the American Revolution.

Founding Gardeners adds depth and nuance to our understanding of the American experiment and provides us with a portrait of the founding fathers as they’ve never before been seen.

Andrea Wulf trained as a design historian at London’s Royal College of Art. She is the author of The Brother Gardeners (long-listed for the Samuel Johnson Prize in 2008 and winner of the American Horticultural Society 2010 Book Award) and the coauthor (with Emma Gieben-Gamal) of This Other Eden. She has written for The Sunday Times (London), The Guardian, The New York Times, The Wall Street Journal, and the Financial Times, and appears regularly on BBC television and radio. She lives in London.