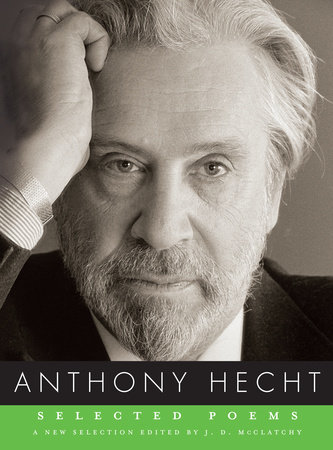 The life of Anthony Hecht (1923-2004) spanned a fascinating period in our art—he knew W. H. Auden and Sylvia Plath, served in the Second World War, and lived to see what came well after the flowering of post-war American poetry, of which he was a part. As the poetic landscape opened up onto a vista of increasingly diverse voices and approaches in the latter part of the twentieth century, his own poems remained a constant—exacting in form and content, continuing to look backward to Herbert, Milton and Shakespeare and, yes, Auden. As J. D. McClatchy writes in the introduction to Hecht’s Selected Poems (the first time a selection across his entire career has been available, even during his life), “His is a responsible art, an art that responds to history, to political and domestic tragedies, with an awareness of personal accountability. The beauty of a Hecht poem, the very skill by which its material is revealed, often throws into an even stronger, more pathetic light the desolation of the human condition that is his subject.” Here is “Devotions of a Painter,” from his 1990 volume The Transparent Man.

Devotions of a Painter
Cool sinuosities, waved banners of light,
Unfurl, remesh, and round upon themselves
In a continuing turmoil of benign
Cross-purposes, effortlessly as fish,
On the dark underside of the foot-bridge,
Cast upward against pewter-weathered planks.
Weeds flatten with the current. Dragonflies
Poise like blue needles, steady in mid-air,
For some decisive, swift inoculation.
The world repeats itself in ragged swatches
Among the lily-pads, but understated,
When observed from this selected vantage point,
A human height above the water-level,
As the shore shelves heavily over its reflection,
Its timid, leaf-strewn comment on itself.
It’s midday in midsummer. Pitiless heat.
Not so much air in motion as to flutter
The frail, bright onion tissue of a poppy.
I am an elderly man in a straw hat
Who has set himself the task of praising God
For all this welter by setting out my paints
And getting as much truth as can be managed
Onto a small flat canvas. Constable
Claimed he had never seen anything ugly,
And would have known each crushed jewel in the pigments
Of these oily golds and greens, enamelled browns
That recall the glittering eyes and backs of frogs.
The sun dispenses its immense loose change,
Squandered on blossoms, ripples, mud, wet stones.
I am enamored of the pale chalk dust
Of the moth’s wing, and the dark moldering gold
Of rust, the corrupted treasures of this world.
Against the Gospel let my brush declare:
“These are the anaglyphs and gleams of love.”