How Jennifer Egan Put The Goon Squad Together 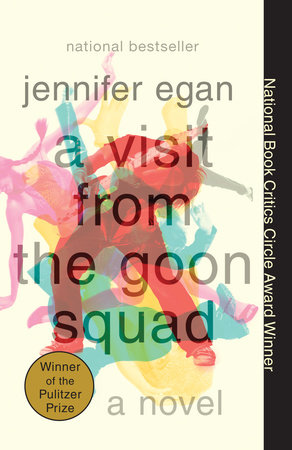 In this exclusive essay, Jennifer Egan tells us how and why she created A Visit From the Goon Squad‘s unusual structure—and why it is that she writes fiction at all.

Readers of A Visit From the Goon Squad are sometimes startled at first to find that each of its thirteen chapters has both a different main character, and a different mood, tone and feel from the other chapters. My thinking was: if this novel is made of parts—rather than one central story—why not take full advantage of that structure and make the parts as unlike one another as they can possibly be, while still fusing together? I wanted to provide the greatest possible range of reading experiences: some parts of the book are unabashedly tragic; others are satiric; a few moments are openly farcical. One chapter is written in the form of a celebrity profile; another is in PowerPoint. I tried writing a chapter in epic poetry, but it turns out that to write epic poetry, you have to be a poet.

Goon Squad is a microcosm of what I’ve tried to do from book to book throughout my writing career. Each time I finish a book, I try to imagine my way into a world that has no overlap with the one I’ve just left. The Keep, which I wrote before Goon Squad, is a gothic thriller. And yet in one sense the two books are similar: The Keep is set both in a castle, where the gothic adventures unfold, and also in a prison, where an inmate is creating the gothic castle story in his writing class. The two layers of action feel completely different from each other, much in the way the chapters of Goon Squad are. In some deep way, I’m more comfortable interweaving contrasting stories than sticking with just one. And while I often tell myself (and others!) that my fiction has no connection to my real life, I think this inclination originates from my childhood.

I was born in Chicago, of young parents whose marriage ended when I was two. My only memories of my parents together involve one of them delivering me to the other before or after my Sunday visits with my father. Those visits began with Mass: my father was Irish American and devoutly Catholic, the son of a police commander on Chicago’s South Side. My mother was Protestant, the Vassar educated daughter of an orthopedic surgeon who had played football for the University of Chicago to pay for medical school there. When I was four, my mother remarried, and at age seven I moved with my new family to San Francisco, where I grew up. I remember my first glimpse out the window of the San Francisco hotel where we were staying at the beginning: a flash of sun on pastel that revealed to me instantly, on an almost cellular level, the contrast between this California landscape and the urban, industrial contours of Chicago. It was 1969. San Francisco was full of hippies and rolling fog. But even after all that had become normal to me—after years when my exposure to Chicago was limited to the three weeks I spent with my father and his new family each summer—a shadow version of me remained in the Midwest and grew up in parallel, surrounded by smokestacks and yellow brick and deep, sparkling Lake Michigan.

Sometimes I wonder if my need to occupy two opposing worlds is what led me to write fiction in the first place. I drop my kids at school, throw laundry into the machine, fret over bills and what to make for dinner, and all the while I’m in another landscape that hovers apart from my tangible life, beckoning and amusing me, winking in the background, awaiting my arrival.

Click to read an excerpt from A Visit From the Goon Squad and download the reading group guide.