April 19: Kenneth Koch's "To My Fifties" 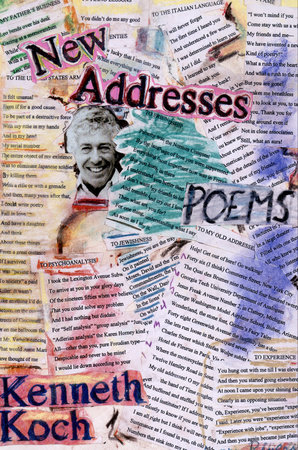 The titles of the poems in Kenneth Koch’s New Addresses—”To Life,” “To My Father’s Business,” “To World War Two,” “To Kidding Around,” “To Testosterone,” “To Knowledge, My Skeleton, and An Aesthetic Concept,” “To My Heart as I Go Along”—are almost as fun to read as the poems themselves, which are signature Koch: highly quirky and personal but also entirely universal; free-wheeling; open to risk and to nonstandard approaches, both poetic and emotional.

I should say something to you
Now that you have departed over the mountains
Leaving me to my sixties and seventies, not hopeful of your return,
O you, who seemed to mark the end of life, who ever would have thought that you would burn
With such sexual fires as you did? I wound up in you
Some work I had started long before. You were
A time for completion and for destruction. My
Marriage had ended. In you I sensed trying to find
A way out of you actually that wasn’t toward non-existence.
I thought, “All over.” You cried, “I’m here!” You were like traveling
In this sense, but on one’s own
With no tour guide or even the train schedule.
As a “Prime of Life” I missed you. You seemed an incompletion made up of completions
Unacquainted with each other. How could this be happening? I thought. Or
What should it mean, exactly, that I am fifty-seven? I wanted to be always feeling desire.
Now you’re a young age to me. And, in you, as at every other time
I thought that one year would last forever.
“I did the best possible. I lasted my full ten years. Now I’m responsible
For someone else’s decade and haven’t time to talk to you, which is a shame
Since I can never come back.” My Fifties! Answer me one question!
Were you the culmination or a phase? “Neither and both.” Explain! “No time. Farewell!”