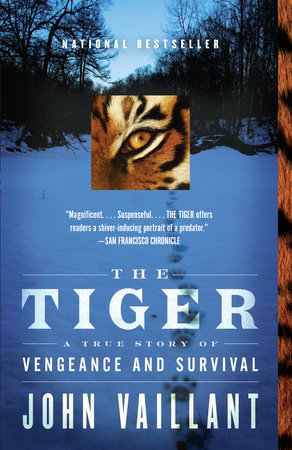 The Tiger, by John Vaillant, is the riveting account of a team of trackers sent to hunt down an Amur tiger who has killed two men in the Russian territory of Primorye. The trackers are led by Yuri Trush, an antipoaching official charged with protecting the people of the region as well as the endangered tigers. Both a thriller and a powerful exploration of mankind’s relationship with the natural world, The Tiger sheds light on the plight of these wild and fast-disappearing animals.

The Amur tiger has long been sought after by hunters for its big-game appeal and for its value on the black market. The Primorye region of Russia—the southeasternmost region of the country—shares a border with China. While this border is a corridor for legitimate foreign trade, it is also home to a thriving black market for tiger parts. In the early 1990s, as the post-Perestroika Russian economy struggled to right itself, many hunters in the region turned to tiger poaching as a means of supporting their families.

In 1992, the Wildlife Conservation Society began working with local government agencies to conserve the dwindling Amur tiger population. The WCS notes that the task is not an easy one: “[Amur] tigers cannot only be conserved in nature reserves–only about 60 tigers would be saved that way, scattered across habitat ‘islands,’ and that population would not be viable. This means that working with people who share their turf with tigers, or tiger prey, is key.” In order for both mankind and wildlife to survive, a balance must be struck between the two.

In this excerpt from The Tiger, featured in the Scribd widget below, two maps offer a closer look at the geography of this remote area (scroll past the first few pages to reach the maps). The first map, “The Russian Far East,” shows the concentration of the Amur Tiger population in the Sikhote-Alin-Mountains. According to UNESCO, who placed these mountains on the World Heritage List in 2001, this region contains “the greatest plant and animal diversity on the north-western coastline of the pacific.” The second map, “The Bikin River Valley,” is a detailed view of the area where the tiger attacks of 1997 took place. 10% of the Amur tiger population makes its home here, making conservation of the valley a priority.

Recent population surveys place the Amur tiger’s numbers between just 330 and 390, and several organizations are working together to prevent poaching and the destruction of habitats for these tigers and for other species in the region. If you or your book club are interested in making a donation, John Vaillant recommends supporting the efforts of the following three organizations:

Your reading group may also be interested in renting Conflict Tiger, the documentary that inspired John Vaillant to write The Tiger. Click here for more information.