Have You Learned How To Live Safely in a Science Fictional Universe? 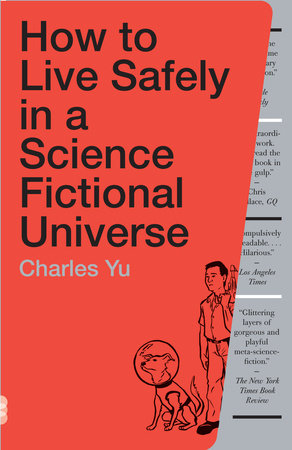 Now is the perfect time to start! Charles Yu’s How To Live Safely in a Science Fictional Universe is available now in paperback. Yu’s debut novel has been highly praised by critics, with the New York Times Book Review calling it, “A complex, brainy, genre-hopping joyride of a story, far more than the sum of its component parts, and smart and tragic enough to engage all regions of the brain and body.” Read on for more great reviews!

“Compulsively rereadable…. Hilarious…. Yu has a crisp, intermittently lyrical prose style, one that’s comfortable with both math and sadness, moving seamlessly from delirious metafiction to the straight-faced prose of instruction-manual entries…. [The book itself] is like Steve Jobs’ ultimate hardware fetish, a dreamlike amalgam of functionality and predetermination.” —Los Angeles Times

“Douglas Adams and Philip K. Dick are touchstones, but Yu’s sense of humor and narrative splashes of color–especially when dealing with a pretty solitary life and the bittersweet search for his father, a time travel pioneer who disappeared–set him apart within the narrative spaces of his own horizontal design…. A clever little story that will be looped in your head for days.” —Austin Chronicle

“If How to Live Safely in a Science Fictional Universe contented itself with exploring that classic chestnut of speculative fiction, the time paradox, it would likely make for an enjoyable sci-fi yarn. But Yu’s novel is a good deal more ambitious, and ultimately more satisfying, than that. It’s about time travel and cosmology, yes, but it’s also about language and narrative — the more we learn about Minor Universe 31, the more it resembles the story space of the novel we’re reading, which is full of diagrams, footnotes, pages left intentionally (and meaningfully) blank and brief chapters from the owner’s manual of our narrator’s time machine…. Yu grafts the laws of theoretical physics onto the yearnings of the human heart so thoroughly and deftly that the book’s technical language and mathematical proofs take on a sense of urgency.” —NPR