Lisa Unger on What's Different (Or Not) About Fragile 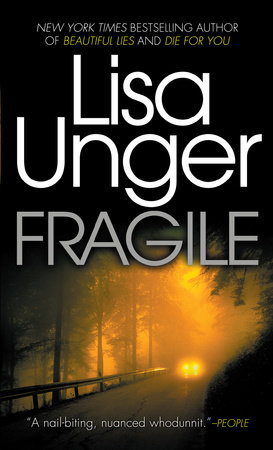 When Fragile was first published in hardcover, Lisa Unger wrote an essay about the journey she took in discovering the heart of the novel’s story. In honor of Fragile‘s paperback publication, we are reprinting Lisa’s wonderful article in full.

Once upon a time, an editor I respected and from whom I had learned quite a bit suggested, as she turned down my novel, that I make some decisions about myself. In fact, what she said precisely was, “Lisa, you have to decide what you are. Are you a literary writer? Or are you a mystery writer?”

I was a little confused — because I didn’t really consider myself either one of those things. In fact, I had never endeavored to define myself as a writer of anything but story. Sure, I had dark leanings. My protagonist at the time was a true crime writer, and she got herself into a great deal of mayhem. As a reader, I had always loved crime fiction and thrillers. But it was also true that when it came to reading I had loved many other types of fiction and viewed myself more than anything as a literary omnivore.

When I began my first novel at the age of 19, I didn’t sit down to write a mystery novel or a literary novel. I was just writing what I wanted to write…and that was a story about a troubled woman who had chosen a dark profession to try to order the chaos she perceived in her life and in the world. There was a psychic healer, a former FBI agent, and a high body count. So, yes, I supposed when the book was done, it was in fact a mystery — or a maybe a thriller. Possibly, it was crime fiction. The point is when my fingers were at the keyboard, the question of what space it would occupy on the bookshelf simply never occurred.

It took me ten years to finish and finally publish that novel. Good thing I had an early start. And then I published three more mystery novels under my maiden name Lisa Miscione. They were small books, based on an idea that I had when I was really too young to be writing books. Though they will always occupy a special place in my heart, I consider them the place where I cut my teeth, honed my craft, and became a better writer. I think you can still find them floating around in the used book ether.

Between the third and the fourth book in that series, I wrote Beautiful Lies. Again, even though I was a published writer, and had every right to believe that that book, too, would publish, I never worried that it was or wasn’t what it should be. It was just the story that welled up from an inner place. I wouldn’t have been able to stop it if I had tried. That book led me to a new place in my career, another publisher, and a new phase in my evolution as a writer.

Now, with eight novels on the shelves (well, four of them are still on the shelves), one about to be published, and my tenth nearing completion, I still don’t give too much thought to who I am as a writer, what kind of books I’m writing. I still write from that inner place and honor the voices in my head. Which is why I was about halfway through Fragile before I realized that it was different from what had come before it. And that it was the book that I had been trying to write, in one way or another, for more than twenty years.

This story has tried to find its way out in various partials over the years. Always with different voices and never quite succeeding to resolve itself. I was surprised when it surfaced in Fragile. And in writing this book I learned something truly interesting: one can have ambitions to write a story but not have the talent or the craft to tell it well. It took the writing of eight novels before I had the skills necessary to tell the story, to write the kind of book that had been simmering for decades.

Also, the subject matter of this novel was uniquely personal, based loosely on an event in the town where I grew up. A girl I knew, someone who attended my high school, was abducted and murdered. We were teenagers, growing up in a quiet, idyllic suburban town. Her gruesome death was terrifying and surreal, all at once. And it changed forever how I saw the world; though I am not sure I was aware of this until recently. I didn’t realize how it had stayed with me until I was metabolizing it on the page. This may be another reason it took so long for the story to find its way, to find the voices it needed to say what had to be said. In other words, maybe I needed to grow up a little to meet Maggie and Jones, the characters who have the most at stake in Fragile.

I was surprised by the reactions of my early readers and my publisher to Fragile. I am published in a place where people support the evolution of my writing, and who have never asked me to define myself or to change how and what I write. So when my wonderful editor said how different it was, it wasn’t followed (thankfully) by “We can’t publish this.” Still, the idea that it was “so different” caught me off guard. Was it? I still have dark leanings. There’s still a terrible crime. There is still a mystery, as in all novels, to be unraveled. It didn’t feel different when I was writing it. Though, I did have a sense that it was heftier in some ways, harder to manage. I felt the weight of it.

On the other hand, how could it not be different? How can every book not be different than the one that came before? I’m different — every year older with new experiences and (hopefully) more wisdom and insight into people and the world around me. How could the book I’m writing at 30 or 40 not be different from the one I was writing at 19? As far as I’m concerned, it had damn well better be.

But that’s the writer in me. With almost twenty years of publishing experience under my belt, not just as an author but also as a book publicist in my former life, I can put on the other hat, too. Where does this book belong in the store? What kind of jacket does it get? Who wants to read it? And after the book is done, I’m able to think about those things. They are important matters. After all, this is a business. And I’m not, as the romance of it all dictates, just writing for myself. I just don’t happen to think about this when I’m writing. Then, all I’m thinking about is the people that populate my novels — who are they? What motivates them? What are they going to do? And what are they trying to tell me?

So the idea that Fragile is a departure for me — a move away from one type of writing and into another, seems a little strange. I know there can be some snobbery in the industry. If you’re writing mystery or thriller or crime fiction, there’s a sense that you’re not writing as well as those who are writing “literary” or “general” fiction. But we have only to look to writers like Laura Lippman, Ruth Rendell, Dennis Lehane, Kate Atkinson and George Pelecanos to know better. I’d go so far as to say that some of the best people writing today are writing in crime fiction. And I think if you asked most writers what kind of books they write, most of them would pause. The answer they’d give might not be their own, or one that they feel quite fits. I certainly don’t claim to know the answer when I’m asked. I always nicely say, “Maybe you should read my books and tell me what you think they are.”

So, years later, I guess I’m still trying to decide what kind of writer I am. Or not. Maybe that’s up to the people who publish me, sell me and read me. Maybe I’ll just continue to follow the advice I give to my fellow writers when they are in a place of angst about genre, or publicity and promotion, or advertising and bestseller lists: Nose to the keyboard. Because, as writers, that’s where we’re at our best; it’s usually where we’re happiest. That’s where I was when I wrote Fragile and all my novels — whatever they wound up being when they were done.

As the publication date for Fragile approaches, I am in my usual place of nervousness. With my nose to the keyboard, I have all the control. As Fragile hits the shelves, I have none — my part is done. All I can do now is hope. I hope that my longtime readers will find everything they have come to expect — and a little bit more. I hope new readers will come to me because maybe I have more to offer than I did last year. And most of all, I hope that I have been true to the characters and situations at the heart of the story. Because, more than who I am as a writer or what they call me, that’s what matters.