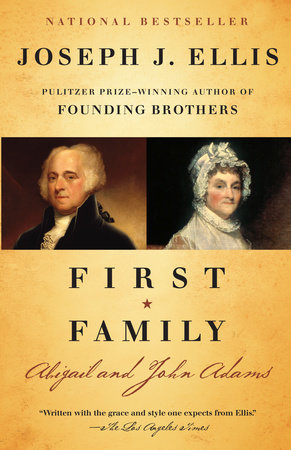 First Family, by Pulitzer Prize-winner Joseph Ellis, is a rich and engrossing account of John and Abigail Adams’ marriage. Drawing on over 1,200 letters exchanged between the couple, Ellis tells a story both personal and panoramic. We learn about the many years Abigail and John spent apart as John’s political career sent him abroad; their relationship with their children; and Abigail’s role as John’s closest and most valued advisor. Both a revealing portrait of a marriage and a unique study of America’s early years, First Family is a great choice for reading groups interested in a great historical nonfiction read. In this exclusive essay, Joseph Ellis discusses how the love story between John and Abigail became the focus of the book.

When I first started work on what became First Family, I thought I was writing the story of a great political partnership, two “dearest friends” who happened to live their lives across a truly historical landscape. That assumption never completely died, so the story I try to tell inevitably moves through major moments that shaped us as a people and a nation: the coming and winning of American independence; the founding and securing of the American republic; the origins of American domestic and foreign policy; the creation of political parties.

But about halfway through the research I realized that I was also writing a love story, a sustained bond of mutual affection that lasted for nearly sixty years, changing coloration over time, but retaining throughout an intensity and intimacy that defined their lives and shaped John and Abigail’s perception of all the history that was happening around them.

It was, to be sure, a love story for adults, more seasoned and sacred than anything you could find in Romeo and Juliet. Indeed, when asked near the end if she would do it all over again, Abigail replied that although she and John had suffered much pain together, she could not imagine doing it with anyone else.

In the preface of the book, I put it this way:

“All of us who have fallen in love, tried to raise children, suffered extended bouts of doubt about the integrity of our ambitions, watched our once youthful bodies betray us, harbored illusions about our impregnable principles, and done all this with a partner traveling the same trail, know what unconditional commitment means, and why, especially today, it is the exception rather than the rule. Abigail and John traveled down that trail about two hundred years before us, remained lovers and friends throughout, and together had a hand in laying the foundation of what is now the oldest enduring republic in world history. And they left a written record of all the twitches, traumas, throbbings, and tribulations along the way. No one else has ever done that.”

So the larger story here must combine, or better yet fuse together, personal intimacy and public achievement, since that is how Abigail and John experienced their time. Love, in the fullest sense, meets history in the crucible of the founding. You can sit around and wait, but are unlikely ever to see such a pair again.