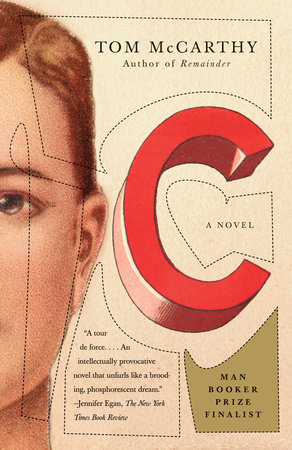 C, by Tom McCarthy, is a wonderfully inspired novel that stretches from the skies of World War I to the tombs of Egypt. It’s the story of Serge Carrefax, whose father spends his time experimenting with wireless communication while running a school for deaf children. Serge grows up amid the noise and silence with his brilliant but troubled older sister, Sophie: an intense sibling relationship that stays with him as he heads off into an equally troubled larger world.

“Remarkable not for its austerity but for its unlikely, panoramic ambition…C is a bird so rare as to seem oxymoronic: an avant-garde epic, the first I can think of since Ulysses.”
—Jonathan Dee, Harper’s Magazine

“[An] extraordinary novel….McCarthy reignites the literary pyrotechnics of Perec, Calvino, Joyce and Sebald. Words are celebrated in vocabularic feats….[He] has produced something truly original.”
—The Washington Post