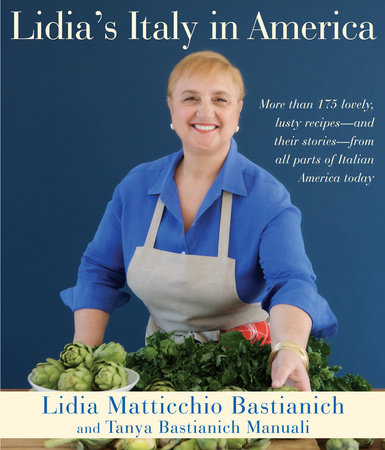 After taking us on journeys into her own kitchen and into kitchens across Italy, Lidia Bastianich now invites us on a road trip into the heart of Italian American cooking today. Traveling around the United States, Lidia visits Italian American communities that created something new out of the recipes passed down from their ancestors.

As she explores this utterly delectable and distinctive cuisine, Lidia shows us that every kitchen is different, every Italian community distinct, and little clues are buried in each dish: the Sicilian-style semolina bread and briny olives in New Orleans Muffuletta Sandwiches, the Neapolitan crust of New York pizza, and mushrooms (abundant in the United States, but scarce in Italy) stuffed with breadcrumbs, just as peppers or tomatoes are. Lidia shows us how this cuisine is an original American creation that redefines what we know as Italian food while always paying tribute to Italy, and she gives recognition where it is long overdue to the many industrious Italians across the country who have honored the traditions of their homeland in a delicious new style.

And of course, there are Lidia’s irresistible recipes, including
·        Baltimore Crab Cakes
·        Pittsburgh’s Primanti’s Sandwiches
·        Chicago Deep-Dish Pizza
·        Eggplant Parmigiana from the Bronx
·        Gloucester Baked Halibut
·        Chicken Trombino from Philadelphia
·        authentic Italian American Meatloaf, and Spaghetti and Meatballs
·        Prickly Pear Granita from California
·        and, of course, a handful of cheesecakes and cookies that you’d recognize in any classic Italian bakery

This is a loving exploration of a fascinating cuisine—as only Lidia could give us.

Attention Foursquare users: Check into the restaurants highlighted in Lidia’s Italy in America!

Lidia Matticchio Bastianich is the author of seven previous books, five of which have been accompanied by nationally syndicated public television series. She is the owner of the New York City restaurant Felidia, among others, and she gives lectures on Italian cuisine throughout the country. She lives on Long Island, New York.

Meet Lidia on her book tour

Tanya Bastianich Manuali received her Ph.D. in Renaissance art history from Oxford University. In 1996 she started Experienze Italiane, a travel company that arranges food, wine, and art tours to Italy. She also co-authors books with her mother, Lidia; manages Lidia’s product line; and serves as the cultural and art consultant for the art series. She lives on Long Island.